As the Taliban seizes control of Afghanistan, experts warn severe drought could worsen the humanitarian crisis triggered by an exodus of western forces 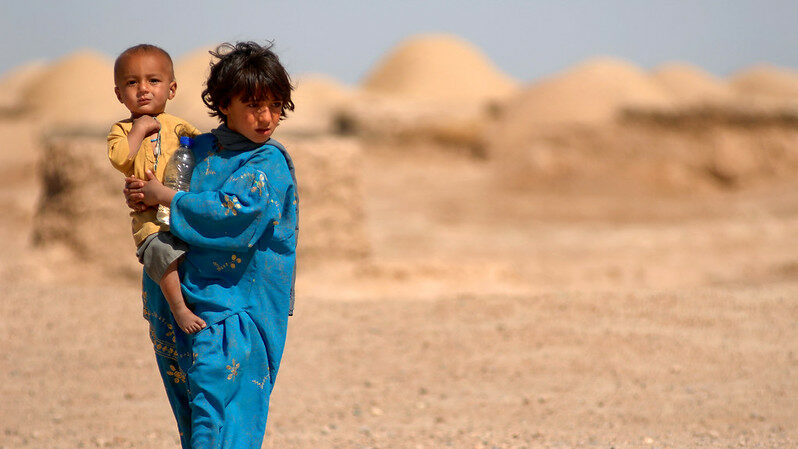 More than 10 million Afghans are facing acute food insecurity caused by prolonged drought as the Taliban seizes control of the country.

Experts say drought and severe water shortages have compounded instability and conflict in Afghanistan for decades and are worsening a humanitarian crisis precipitated by the withdrawal of US and allied troops.

Afghanistan is in the grips of its second drought in four years. Since 1950, Afghanistan’s average annual temperature has increased by 1.8C, according to the climate security expert network. Heavy rainfall events have increased by between 10-25% over the past 30 years.

14 million people, around 35% of Afghanistan’s population, were already facing acute food insecurity before the Taliban takeover, according to the World Food Programme (WFP). Half of all Afghan children under the age of five suffer from malnutrition.

The UN’s humanitarian coordinator for Afghanistan Ramiz Alakbarov told Reuters last week that Afghans are facing a double threat: conflict and drought. “You have a kind of combination effect of displacement caused by war and by military hostilities compounded with displacement caused by drought and by the difficult economic conditions,” Alakbarov said.

Oli Brown, associate fellow at Chatham House, told Climate Home News that food insecurity will increase in the next few months as snow makes roads in parts of the country completely impassable. “Unless you have a working system of governance to provide a safety net before the snow comes in, people will get stuck,” he said.

Afghans have found themselves caught in a vicious cycle of climate change and conflict for over 40 years. “One creates conditions for the other,” said Brown. Water and land scarcity have increased community-level conflict, poverty and instability, which in turn have driven environmental degradation and the depletion of resources.

Climate change is expected to bring more frequent and intense extreme events, such as droughts and flash flooding, to the country in upcoming decades. More frequent droughts could boost the drug economy as opium poppies flourish in warm, dry climates.

Opium poppies are drought-resistant, easy to grow and transport, according to Brown. “Where wheat fails,  opium poppies often survive,” he said.

Afghanistan’s climate plan, submitted to the UN in 2015, outlines that all the country’s 34 provinces are highly vulnerable to climate impacts, including drought, heatwaves and glacial lake melts. Water stress is a major concern as 80% of the country’s population relies on rainfed agriculture for their livelihoods.

The climate plan said $2.5 billion was needed for watershed management and $4.5 billion for the restoration of irrigation systems by 2030. But investments in boosting water and climate resilience over the past decade have been insufficient, experts say.

Vivekananda said that this issue is likely to be “kicked into the long grass” as development aid is suspended and the immediate focus shifts to humanitarian aid. “It is incredibly critical that this is not seen as a long-term issue, but rather as a priority issue for stabilising the situation now,” she said. “It underlies any hope of addressing the longer term humanitarian needs of the Afghanistan population.”

Brown said international partners, including the US, did invest in building new irrigation channels, but that it is unclear how many of these were properly maintained.

Improvements to irrigation systems in some cases increased poppy cultivation and opium production, according to a report by the special inspector general for Afghanistan reconstruction (SIGAR).

President Joe Biden has decided to finish evacuating US troops from Afghanistan by 31 August, an administration official said on Tuesday.

In the past week since the Taliban took the capital Kabul, thousands of Afghans have fled the country, including government officials, journalists and translators for western forces. Thousands more are camped in Kabul airport hoping to get a seat on a plane.

As western powers lose their appetite for foreign intervention, a return to Taliban rule for the country looks all but inevitable. The hardline Islamist group, which enforces a strict version of sharia law, was removed from power by US-led forces in 2001.

Ensuring water access and protecting people from severe climate impacts is critical to the governance of Afghanistan, said Vivekananda. “Providing safe, predictable and regular water would be an opportunity for the Taliban to prove their legitimacy and show good governance.”

“It is the essential resource for agriculture, which is essential for the economy and provides the vast majority of livelihoods,” said Brown. “If the Taliban care about the Afghan people, they are going to have to care about water.”