A month after fatal floods swept through western Germany, survivors are still in shock and experts warn such disasters are becoming more common 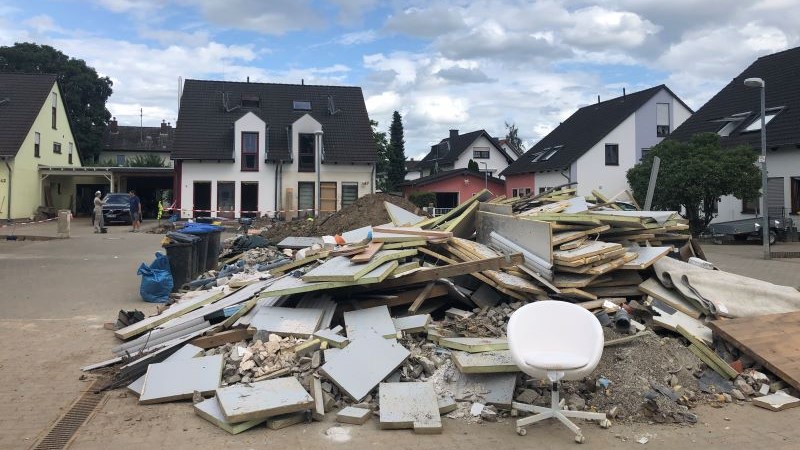 A month after floods swept through Sinzig, Germany, wrecked furniture and rubble is piled high in the streets (Pic: Marlene Jacobsen)

“When the firefighters rang our doorbell and warned us to move the car, we did not believe them that the water would come this far,” one resident of Sinzig, a small town in western Germany, told Climate Home News.

Nor did the firefighters foresee that the entire ground floor of the house would be flooded. They returned five hours later, at 1:30am, to tell the Ball family – the woman, her husband and elderly mother – to evacuate immediately. By then, the water had reached their doorstep.

That same night, in a care home just around the corner, 12 disabled occupants could not escape their flooded rooms in time and drowned. Heavy rainfall had turned the Ahr, a usually quiet flow that winds past Sinzig, into a torrential river that swept away cars, houses and even bridge piers.

Similar scenes played out in parts of Luxembourg, Belgium and the Netherlands between 12 and 18 July. It is estimated that, across the region, the catastrophic floods killed over 200 people and damaged nearly 72,000 buildings at a cost of over $10 billion.

A month after the disaster, the survivors are trying to understand how they were caught off guard – and who is responsible for preventing a repeat.

It is not that the weather forecasts were wrong, according to Jeff Da Costa, PhD researcher in environmental sciences at the University of Reading. Several days in advance, the European Flood Awareness System (EFAS) accurately predicted the severe risk of flooding and issued a notification to the German authorities.

EFAS notifications are designed for experts and only consider big rivers like the Rhine, not its tributary the Ahr. “A hydrologist knows exactly what [the models] mean to all the adjacent water ways,” said Da Costa. “But oftentimes the people who make the decisions are not experts in the field.”

At a state level, the flood alert service for Rhineland-Palatinate was slower to predict just how extreme the flooding would be in the Ahr valley. It issues warnings on a five point scale.

A spokesperson from the service told Climate Home News that the water level of the Ahr rose abruptly on 14 July. The flood forecast “jump[ed] straight from warning level two to level four”.

This happened at 11:17 am, automatically notifying the district authority of Ahrweiler, where Sinzig is located, by an app. At 5:17 pm, the notification was updated to level five, meaning a flood that statistically occurs once every 50 years, at most.

Still, “everyone thought the situation was manageable,” the spokesperson said. “The drama only came about in the evening.” Too late did it become obvious that the flooding would be far more severe. 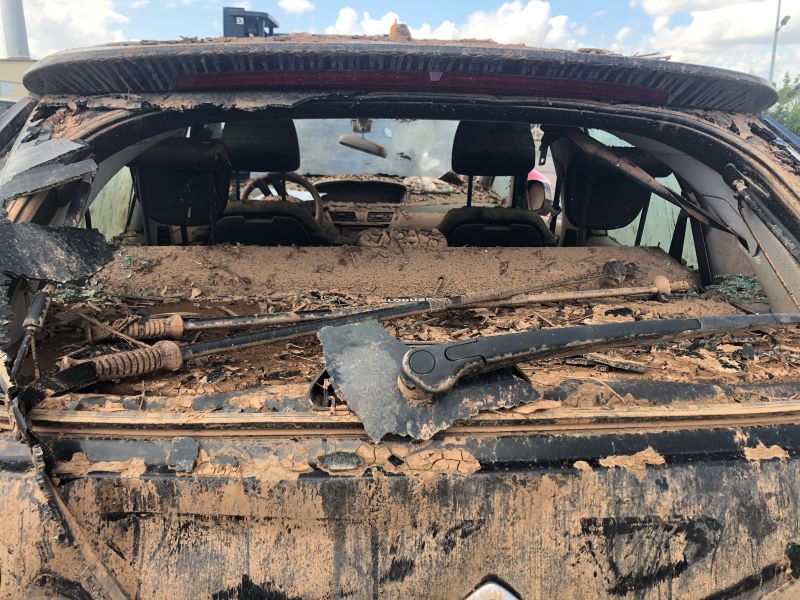 One of many cars wrecked in the floods, at a scrapyard in North Rhine-Westphalia (All pics: Marlene Jacobsen)

The district authority of Ahrweiler is facing a lawsuit for negligent homicide as it only ordered evacuations at 11:09 pm. A press officer declined to comment, saying they did not want to “pre-empt” the ongoing investigations.

The timing of the floods made them more dangerous for two reasons, Stefan Greiving, a professor of spatial planning at the Technical University of Dortmund, explained.

Firstly, the waters rose rapidly at night when most people were asleep, at risk from collapsing buildings and not alert to any warnings. Secondly, flooding in summer is not only unusual, it had never before occurred at such a large scale in the Rhine river basin.

In the winter months, reservoir operators are legally required to leave enough space to accommodate heavy rainfall. In summer, there is no such regulation. But after a rainy few months, the reservoirs in the region were “fuller than ever before in July,” Greiving said, averaging 96% of capacity.

As a result, the reservoirs could not absorb the rainfall of 148 litres per square metre that hit northern Rhineland-Palatinate 14-15 July. 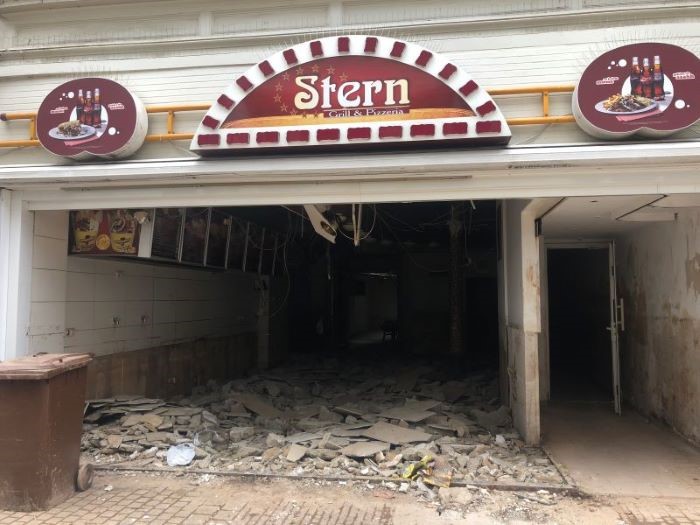 This fast food restaurant on the high street in Euskirchen, North Rhine-Westphalia, was destroyed by the flood. The line on the wall (right) shows how high the water rose.

“We were powerless against these water volumes,” said Alexander Krüger from the fire brigade in Euskirchen, another hard hit town in the neighbouring state of North Rhine-Westphalia. As the head of the crisis team he coordinated the firefighters in the aftermath of the floods, and told Climate Home that even an earlier warning would not have prepared them for an event of this scale. “We tried to pump the water away but had nowhere to pump it because there was water everywhere.”

Such heavy rainfall events are likely to become more frequent and increase the risk of flooding in high-latitude regions including northern Europe and northern Asia, according to the Intergovernmental Panel on Climate Change (IPCC).

At a global scale, river floods are projected to occur more frequently and intensely under a global warming scenario of 1.5C. Reaching 2C instead of 1.5C would have a stronger effect on heavy rainfall events, flood events and high flows in rivers, the IPCC report published this month shows.

A rapid attribution study by the World Weather Attribution group found that warming to date of 1.2C from pre-industrial levels made the extreme rainfall that triggered the floods between 1.2 and 9 times as likely to happen.

Flood forecasting is largely based on historical data, which is not a good guide to future events, Greiving said.

The Ahr’s previous record high water level in 2016 was 3.71 metres, in what was judged to be a 1-in-100-year event. This time it peaked at an estimated 7 metres – estimated because the measuring gauge was torn away by the torrent. “This was a once-in-a-millennium event,” Greiving said, “so, many of the affected places were not at risk according to the models.”

This helps to explain why the district of Ahrweiler ordered on the evening of 14 July that residents living 50 metres from the Ahr should leave their houses, but not the care home where 12 people died, which was more than 250 metres from the river. “The local crisis team… did not expect an event of this dimension,” said Greiving. “You cannot prepare for something that you do not consider possible.” 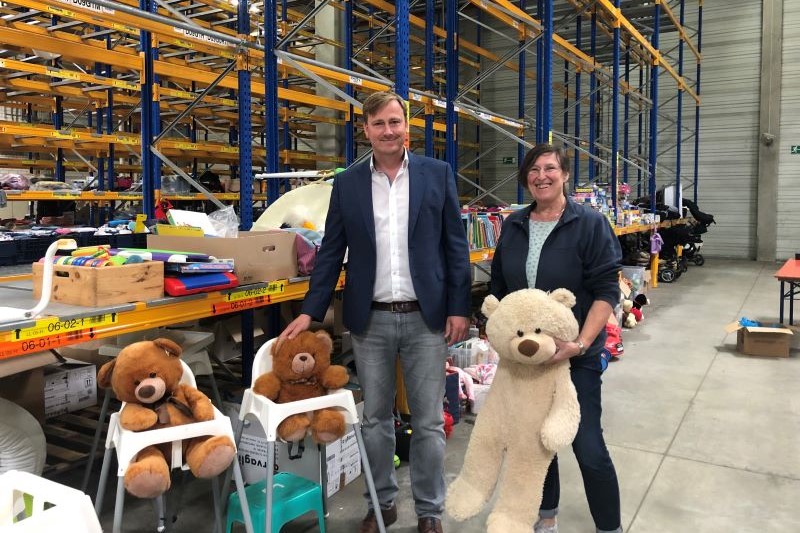 Stefan Pohl and Brigitte Kuchta, founders of “Meckenheim helps”, in the children’s section of the donation warehouse

The previously unimaginable has become a painful reality to those who have lost everything in the floods. What remains is solidarity. Brigitte Kuchta and Stefan Pohl, both from Meckenheim, about 20km from Sinzig, founded the relief campaign “Meckenheim helps”. Supported by around 50 volunteers, they store and sort material donations – at first in an empty office space, now in a significantly more spacious warehouse.

Multiple times a day, volunteers drive to the affected towns, some of which still do not have electricity or running water, and distribute donations ranging from shovels to toiletries. Now that the summer holidays are coming to an end, the helpers make many parents and children smile as they hand out school bags filled with everything pupils need.

The volunteering can be “emotionally exhausting,” Kuchta said, as the helpers witness a lot of grief. “Most people are still in complete shock and only just starting to process what happened,” Pohl added.

In Sinzig, the sound of hammers and drills drones through the streets. The rebuilding will come at a high price. “At the end of the day, they all need a lot of money, that is the only thing that will help,” Pohl said. The government is offering up to €3,500 ($4,129) to each affected household.

Financing recovery might be the most urgent task for the government, but they must also start preparing for the next disaster, said Lothar Schrott, a researcher and lecturer in disaster management at the University of Bonn.

Critical infrastructure and facilities with vulnerable populations, such as the care home in Sinzig, should not be rebuilt in areas at risk of flooding, he said. Risk awareness and what to do in a crisis should be taught in schools.

“We have to get used to the fact that we live in a world that is far more prone to disasters,” Schrott told Climate Home. “That means we need to be prepared for events beyond one hundred-year floods.”

This article was updated after publication with the findings of a rapid attribution study.