Brazil plans to prop up coal sector, defying calls for a global phase out 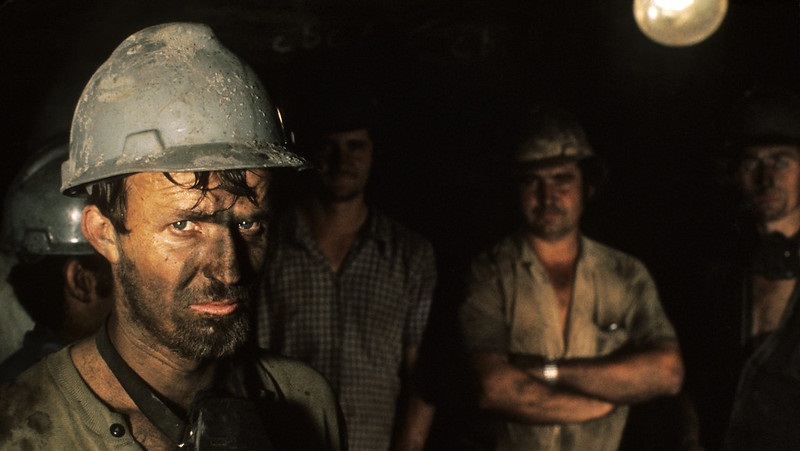 The Brazilian government has announced it wants nearly $4bn of investment in coal mining, despite international calls to phase out the most polluting of fossil fuels.

The Mines and Energy Ministry has published a “programme for the sustainable use of national mineral coal”, which aims to leverage $3.9 billion in investment in coal over the next ten years. It would support the coal sector in Brazil’s southern states until 2050.

The ministry says the money will be used to modernise and provide incentives to Brazil’s coal-fired thermal power plants and could create 600 jobs in mining operations. It added the southern region’ coal reserves could supply 18.6 GW of power over 100 years.

The programme was released on the same day as a major report by the Intergovernmental Panel on Climate Change (IPCC) which found that temperatures in South America are expected to increase at a greater rate than the global average and anticipated an increasing frequency of heat extremes in the Amazon.

UN secretary general António Guterres said the report should be a “death knell for coal and fossil fuels”.

Former environment minister Izabella Teixera told Climate Home News the government’s lifeline for the coal sector was a “big surprise” and described the use of the word “sustainable” in the programme’s title as “a joke”.

She suggested that Jair Bolsonaro’s government had probably been lobbied by the coal sector and wanted to appeal to the president’s base in the southern coal-producing state of Santa Catarina.

“It seems like a lobby to ‘preserve the backyard’ and give a political answer to Bolsonaro’s white supporters in [Santa Catarina]”, she said. 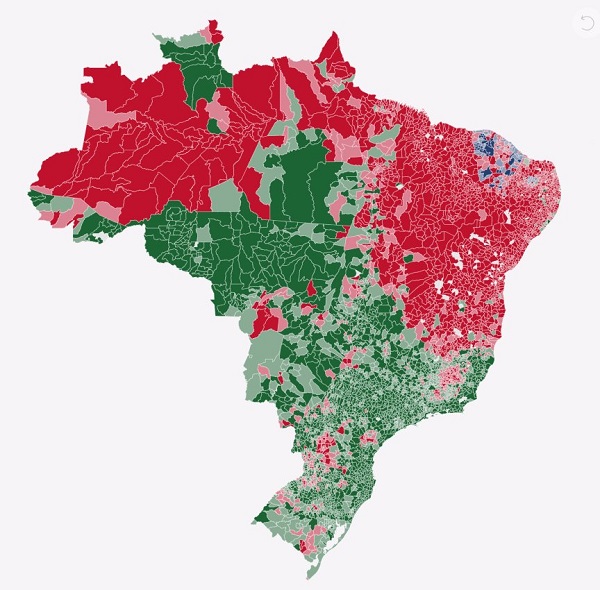 The 2018 election mapped. The strongest support for Bolsonaro is in the darkest green. (Photo: Electoral Geography)

Bolsonaro’s core support in 2018 was highest among the wealthy, the white and the southern part of the country, which included Santa Catarina, where the population is whiter and wealthier than average.

The far-right president is trailing in the polls ahead of next year’s presidential election and is trying to undermine the election’s legitimacy, in a way many analysts say mirrors his ally Donald Trump.

The support for coal goes directly against a push by the Italian G20 presidency and the UK Cop26 host to get the group of nations, of which Brazil is a member, to agree to exit coal.

Sharma has repeatedly said Cop26 had to be the moment that “consigns coal to history”.

Roberto Kishinami, the Climate and Society Institute (ICS)’s energy lead, said the decision to prop up coal shows the UN was wrong to include energy and mines minister Bento Costa Lima as one of its “champions of energy transition”. “The minister promotes a country’s transition towards two centuries ago,” he said.

Think tank Ember’s coal analyst Dave Jones said: “That is a pretty brazen move by Brazil just to ignore all the international momentum on coal. Brazil’s reliance on coal production is pretty small compared to its oil and gas production, but if the government can’t even read the tea leaves on coal, that doesn’t bode well for the climate.” 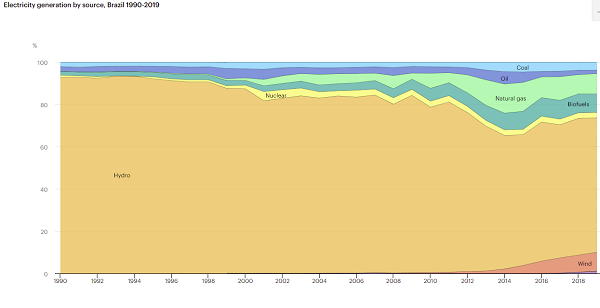 Brazil only gets 3% of its electricity from coal (Photo: IEA)

The vast majority of Brazil’s electricity is produced by hydro-power with just 3% coming from coal, some of which is imported.

Former environment minister Teixera said that, in the long-term, “coal players know there is no future and, to play as a backup to energy security, natural gas will be the one”… not coal.