A week of wildfires has left thousands homeless in southern Turkey 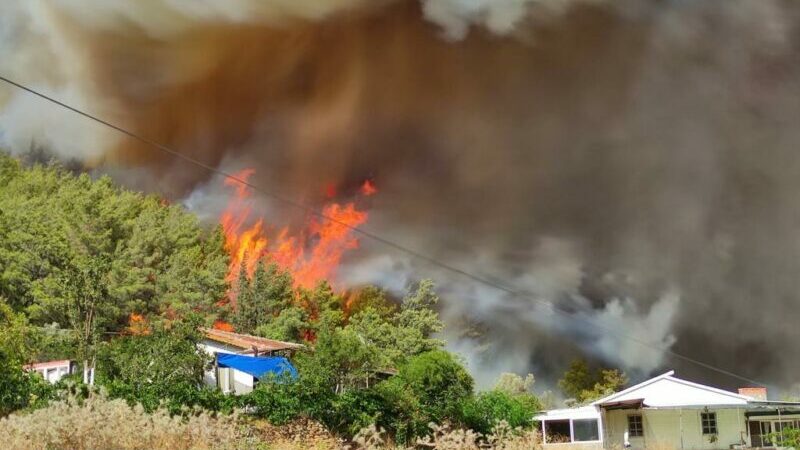 More than a week of devastating wildfires along Turkey’s southern coast, with some still burning, has left eight people dead and thousands homeless.

Manavgat, a popular tourist destination in Antalya province, was one of the worst hit towns, with seven people killed in the fires.

“We feel so desperate, it’s the eighth day. I don’t know how much longer I can hold on. The People of Manavgat live in fear of new fires and they stand guard over the forests that have not burned yet,” said Esat Balci, a 22-year-old university student living in Manavgat.

According to the official statement from the Turkish Presidency on 5 August, 15 fires continue in five provinces. So far, 174 out of 189 fires have been brought under control in 38 provinces.

The Chamber of Agricultural Engineers (ZMO) İzmir province department reports more than 547,000 acres of forest have been burned.

Near the Aegean coastal city of Mugla, flames lapped the perimeter of Kemerköy coal power plant. While authorities said the fire had been contained on Thursday, experts warned residents to wear gasmasks and stay indoors with the windows closed to avoid air pollution.

Gulsum Tasel, a 28-year-old pastry chef, told Climate Home news she and her family had lived in the coastal village of Hisaronu for decades and never experienced anything like it.

“The fire came close to our house and I saw 6-meter flames,” she said. The family tried to protect their property with water from the well, but as the flames got closer the electric pump stopped working and they had to retreat.

“We left the house with only our clothes, leaving our animals free and without even taking our belongings. We were in such a hurry that we couldn’t even get the medicine that my grandfather needed to use every day from the house. We got in the first vehicle we could find and went in the direction the gendarme was pointing to,” said Tasel.

Tasel said that she felt very lucky her family survived and were able to stay with relatives until the fire was under control. Thousands of people who have been evacuated due to the fire have been placed in student dormitories, hotels and shelters by the government and Mugla municipality.

“There are 37,000 fires in the history of Turkey,” said Vural Sahin, head of Antalya Province department of Chamber of Agricultural Engineers: “We have never seen such a big fire.” Many animals had died, he said, calling for support for farmers who lost their livestock and livelihoods.

Since the fires started, people have been calling for aircraft to extinguish the fires but the government said there were not enough to tackle multiple blazes. Russia, Iran, Azerbaijan and Ukraine came to Turkey’s aid. After some initial reluctance to accept EU assistance, the foreign minister Mevlut Çavuşoğlu announced two helicopters from Spain and one from Croatia would support the firefighting efforts.

What started the fires is not yet known in most places. A 12-year-old boy was charged with setting a fire in Manavgat. He confessed to the crime, saying he was angry with his parents.

Rumours of arson prompted some residents to set up identity checkpoints along the roads, but gendarmes told them to stop. Accidental causes could include an electrical fault in a tourism facility or a barbecue getting out of control.

Regardless of the initial spark, a spell of hot, dry weather created the conditions for fires to spread rapidly. According to Turkish state meteorological service, in the Aegean and Mediterranean regions, temperatures this week are 4-8C higher than the seasonal average.

“Climate change plays an important role in the outbreak of these fires,” said Doganay Tolunay, a professor at the Cerrahpasa Forestry Faculty of Istanbul University. “When you throw a cigarette butt into a humid forest, it does not turn into a fire, but because the forests are very dry right now, even a small spark can turn into a big fire.”

Precautions to reduce the risk in such conditions could include a ban on campfires, fire risk assessments for any infrastructure in the forest and a minimum distance of 200m between forests and housing, he said. Controlled burning of undergrowth can limit the fuel available.

Drought conditions had left little water to fight the fires with, said Sahin, adding that wells, fire trucks and water tanks are needed to respond to future blazes.

“We must now focus more seriously on stopping climate change and on what measures to take,” said Tolunay.