“We used to come here on the weekends to swim. Children played in the water and caught fish with their hands. Families enjoyed picnics under the willow trees.

“We used to be happy here. Now we just survive,” said Veronica Vilches as she walked on a dried up riverbed that used to be part of the La Ligua river, which runs through the province Petorca in Chile’s central Valparaiso region.

Vilches, who grew up next to the river, is an activist for Mujeres Modatima, a Chilean organisation that fights to protect the water for local communities and exposes its illegal extraction by businesses and politicians.

“Here it is,” she said, as she stopped by a messy pile of dry branches. Underneath it lies an illegal well. “Be careful,” she warned, looking in the direction of a nearby house, from where people are watching.  A hose can be seen going out towards the hills, which are covered in avocado plantations. Vilches knows these installations very well; agricultural companies use them to steal water from the river’s groundwater course.

She has reported water theft in Petorca to the authorities for years and has received death threats as a result. “People have followed me to my house to intimidate me, and painted death threats in the place where I work. They can paint over every wall they want because they’ll never paint over my dignity,” she told Climate Home News. 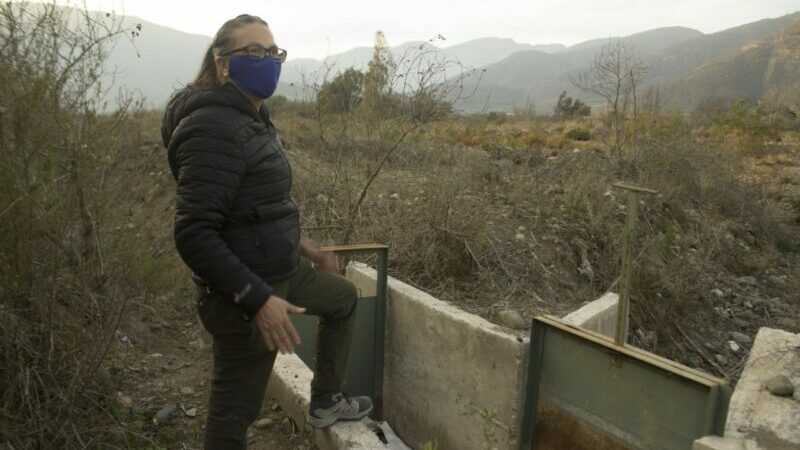 Vilches’ home province of Petorca, 200 kilometres north of the Chilean capital Santiago, is facing a water crisis due to the explosive growth of large-scale avocado farming. This water-intensive production has dried up local rivers and forced many smallholder farmers to leave the area.

“Here I used to have all sorts of fruit trees. And we traded [the fruit] for cheese or milk from our neighbours who had goats. When we were sick, we didn’t go to the pharmacy. We strolled down to the riverside to pick up medicinal herbs. Now we have to buy everything from the stores,” said Vilches. 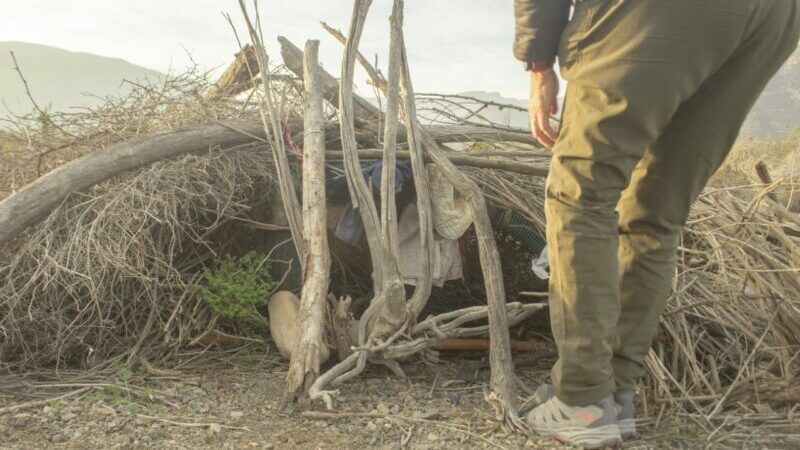 In the middle of a 10-year drought, the longest ever to hit the country, the Petorca province has become the second biggest producer of avocado in the country, which in turn, is the third largest avocado exporter in the world. It takes between 700 and 1200 litres of water to produce a kilogram of avocado – a tropical fruit – according to Ariel Muñoz, investigator in the Centre for Climate and Resilience Research (CR2).

Meanwhile, the provincial government has to buy and deliver water to more than 6,000 people in rural communities, 20% of the province’s population, by truck. The quality of this water is not guaranteed. Petorca residents have reported an increase in diseases such as gastritis and urinary tract infections, which they attribute to the lack of water and its unreliable quality.

The root of this distribution problem lies in Chile’s Constitution and Water Code, both written in 1981 under a military dictatorship. Under this legislation, water was privatised and tradeable water rights were granted for free and in perpetuity.

This system distributed water without taking into account future hydrologic scenarios and climate challenges. Chile is on a desertification path, with dry weather advancing south every year.

“The decrease of rain and snowfall is a clear trend in this part of Chile. But if we combine it with the unplanned overuse of water for agricultural exports, we are accelerating a process of desertification that advances south, and Petorca is starting to show signs of a semi-arid climate,” said Muñoz.

“If we keep extracting water, the reserves will end, and similar scenarios are developing in other parts of the country,” said Muñoz. “Petorca is an example of how critical it can get if we don’t redistribute water and plan with every need and scenario in mind.”

In Petorca, big agricultural companies control more water rights than the volume available. When avocado producers require more than their water quota, they take it illegally. 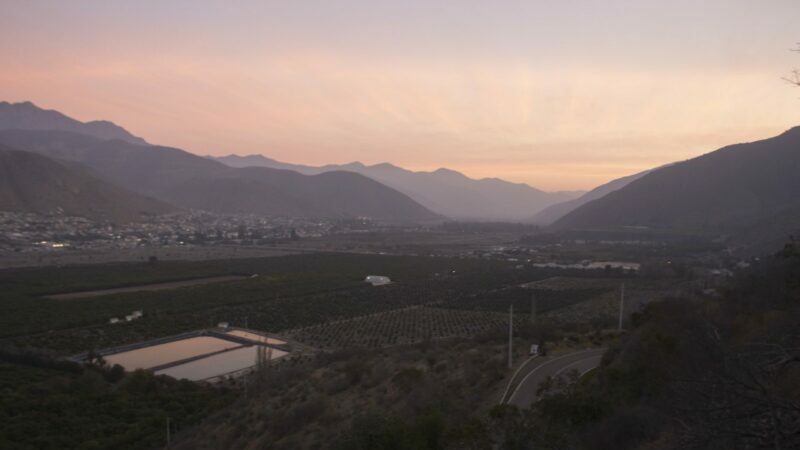 Three large pools of water belonging to an agricultural company are seen in the Petorca valley in Chile.
(Photo: Camilo Escobar Nuñez)

Communities are hopeful that a new constitution will dismantle water privatisation in Chile and ensure fair distribution.

4 July 2021 will be remembered as a historic day in Chile. An indigenous woman, Elisa Loncon, assumed the presidency of a convention to write Chile’s new constitution. 155 citizens were elected by Chilean citizens to the constitutional convention in May this year, following massive protests demanding structural changes.

While Loncon gave her inaugural speech, water rights activist Carolina Vilches, one of the elected citizens, watched in the audience. “Water for everyone! Justice for Petorca!” she shouted as her name was called.

Carolina Vilches works along with Verónica Vilches, no relation, at Mujeres Modatima. She, and representatives from other communities facing water rights challenges, managed to secure a seat in the convention, which started work immediately. They hope the new foundational text will help abolish the current model of water privatisation, and establish access to water as a human right under the Chilean constitution.

“It’s important that voices which have never been listened to, have a space in the construction of a new country. I will give my all to convey the voice of my community in the convention,” Carolina Vilches told Climate Home News.

She committed to work to end the privatisation of water in the new constitution and ensure the right to water and the rights of nature are recognised.

“In this constitutional convention, we see a new opportunity to trigger other necessary changes in the way that water is managed, and to establish access to water as a human rights issue. Our colleague Carolina Vilches is representing us in that space, while we keep our work on the ground which is where we set the foundations for our demands,” Lorena Donaire, another Mujeres Modatima activist, told Climate Home News. 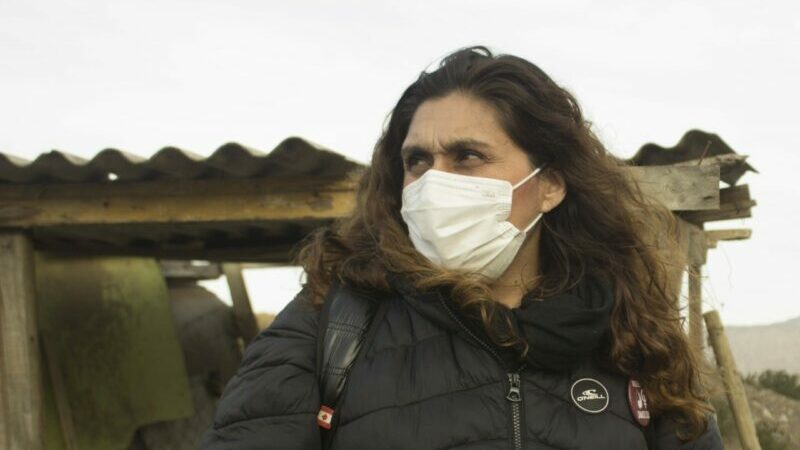 Rural communities in Petorca were already facing severe water shortages when the coronavirus pandemic hit. While the World Health Organization (WHO) recommends a minimum of between 50 and 100 litres of water per day per person, people in Petorca received just 20 litres of water a day, according to a report by the National Human Rights Institute.

Communities and human rights institutions started taking legal action in May 2020, to demand the 100 litres recommended by the WHO were provided.

One of the lawsuits got as far as the Supreme Court, which, in March 2021, ordered the government to meet the 100 litres recommendation. The ruling was seen to set an important legal precedent, but not a permanent solution.

“In Chile, it’s difficult to enforce a ruling as there is no established mechanism, or organism in charge of following up”, said Pilar Moraga, deputy director at the Centre for Environmental Law at the University of Chile. In a similar case regarding contamination and health issues in the same region, the government is yet to obey a two-year-old Supreme Court ruling.

“In addition, delivering water by truck is not a sustainable way to provide water to the community, and there is no mention of the required quality of the water delivered,” said Moraga.

For many, the Constitution has to change for there to be real transformation.

On the ground in Petorca, activists fight on, despite experiencing death threats and intimidation. Modatima women continue to report water theft, and make the situation known to international human rights commissions. Despite the Supreme Court ruling, many people still get less than 100 litres of water a day.

Verónica Vilches and her colleagues created a distribution network during the pandemic, to bring water to those who live in isolated regions. Other localities have raised funds and organised collaborative initiatives to finance temporary water solutions.

“We help each other out and invent what we can to survive. But there is no support, everything comes from our own willpower, and every day is a struggle. We need real change. This is no drought. The water has been stolen from us and we need it to be returned to the land and to the people,” she said.

The provincial government of Petorca did not respond to a request for comment from Climate Home News.

This article is part of a climate justice reporting programme supported by the Climate Justice Resilience Fund. Main image by Camilo Escobar Nuñez.