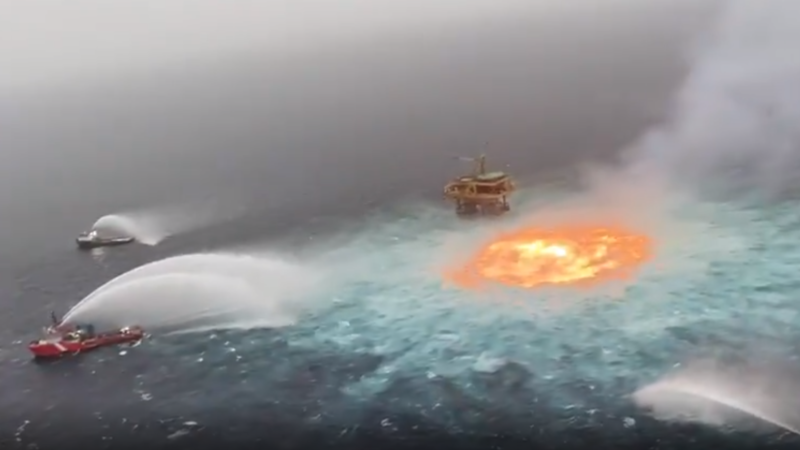 Ships attempt to put out a blaze in the Gulf of Mexico, which oil company Pemex said was fuelled by a ruptured gas pipeline (Pic: Screenshot/Liam Young/Twitter)

Over the weekend the world watched in horror as the ocean caught fire. A gas leak from a ruptured pipeline in the Gulf of Mexico fuelled a huge blaze which raged for five hours on the sea surface.

Pemex said a lightning storm ignited a gas leak from an underwater pipeline. “There was no oil spill and the immediate action taken to control the surface fire avoided environmental damage,” the company said in a statement.

Campaigners disagree, demanding an investigation into the environmental and climate damage caused by the fire. But with little faith in the Mexican authorities, they are looking to regional allies to hold Pemex to account.

Greenpeace Mexico accused Pemex, the state-owned company operating the pipeline, of causing “ecocide” in the Gulf of Mexico, citing the toxic properties and climate impact of methane gas. It blamed the rupture on ageing, poorly maintained infrastructure.

Pablo Ramirez, an energy and climate campaigner for Greenpeace Mexico, told Climate Home News that it was impossible to calculate the carbon footprint of the gas leak because there is no public information about the amount of gas usually transported by the pipeline. He described the lack of transparency in Mexico’s energy sector as “very problematic”.

Lorne Stockman, senior research analyst at Oil Change International, said the pipeline could have been leaking for a while before the gas caught fire. The global heating impact of methane is 84 time higher over 20 years than that of carbon dioxide, which is produced when it is burned. “Until and unless we get more information from Pemex, we won’t know how bad this was,” he said.

“This is just the latest example of how the oil and gas industry pollutes with impunity, and why we must work to shut it down as soon as possible,” said Stockman. “If this gas had not caught fire and caused this visual spectacle, most people would not have heard about it… But it’s clear that we cannot end the fossil fuel age quickly enough to mitigate the damage it is causing.”

At a local level, Greenpeace raised concerns about the harm leaked methane could have caused to marine life.

“The gas can rapidly penetrate the bodies of fish, doing direct damage to gills, skin, chemoreceptors and eyes, and filling up the gas bladder, making the fish unable to control its buoyancy,” Ramirez said. “Shellfish are also killed by exposure to gas.”

If fish are exposed to gas concentrations of 1 mg per litre they show signs of acute poisoning within 20 minutes and die within two days, he added.

Shocking footage of the enormous fireball, dubbed “eye of the fire”, sparked international criticism on social media, including from youth activist Greta Thunberg.

“Meanwhile the people in power call themselves ‘climate leaders’ as they open up new oilfields, pipelines and coal power plants – granting new oil licenses exploring future oil drilling sites. This is the world they are leaving for us,” she wrote on Twitter.

Mexico’s president Andrés Manuel López Obrador has bet heavily on the fossil fuel industry, describing oil as “the best business in the world.” He has dismissed renewable energy sources, referring to wind turbines as “visual pollution.”

The head of Mexico’s oil and gas safety regulator ASEA, Angel Carrizales, tweeted that the incident “did not generate any spillage”.

Energy analyst Poppy Kalesi told Climate Home News that it was unlikely that Pemex would be held accountable by Obrador’s government or ASEA.

Mexico has one of the most comprehensive regulatory frameworks for methane emissions on paper, but in practice it remains difficult to implement, Kalesi said. “ASEA has neither the authority nor the competence or capacity to conduct environmental audits on Pemex’s platforms and equipment.”

As a state-owned company with close ties to the government and without investor pressure, Pemex has no interest in building up competence to evaluate its methane performance, she added.

Kalesi said the US and Canada could exert pressure on the Mexican government to hold Pemex accountable under the 2016 “three amigos” energy deal, in which the three countries pledge to produce 50% of their power by 2025 from renewable energy sources.

“What the US and Canada can and should do is to use both their purchasing power and political pressure to give a hook to the Mexican government to hold Pemex accountable,” Kalesi said.