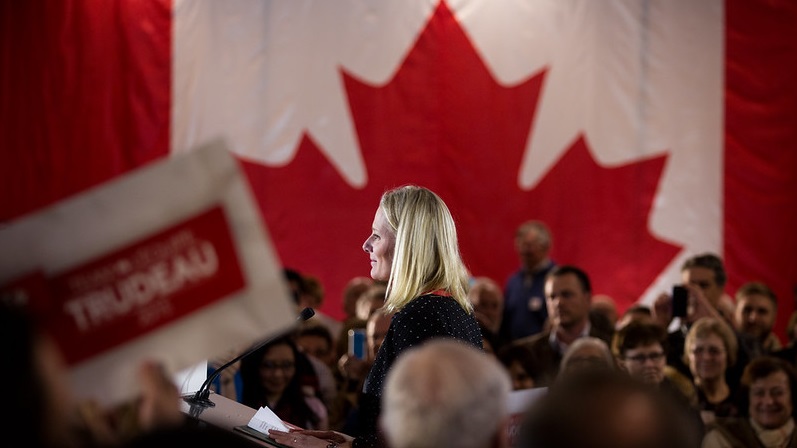 Catherine McKenna on the campaign trail in 2015 (Photo: Justin Trudeau/Flickr)

Canadian government minister Catherine McKenna, who has spent six years shaping Canada’s climate policies, is planning to step down from parliament at the next election.

Announcing her decision on Monday, she said: “Like many Canadians, living through Covid19 over a very long year, made me step back and reflect on what matters to me most. And it’s two things. My kids and climate change.”

She added: “This is a critical year for climate action in the most important decade that will decide whether we can save the only planet we have. I want to spend my working hours helping to make sure that we do.”

After a lot of reflection, I decided I wanted to spend more time on the two things that matter most to me: my kids & the climate.

Huge thanks to the people of Ottawa Centre & Canadians. It’s been such an honour. 🙏❤️ pic.twitter.com/wPbAAGiyhr

McKenna was environment minister between 2015 and 2019 before becoming infrastructure and communities minister.

Domestically, she introduced carbon pricing against strong opposition from provincial governments, and stricter environmental standards for big infrastructure projects – but held the government line in support of oil pipeline expansion.

Internationally, she signed the Paris Agreement and jointly spearheaded the Powering Past Coal Alliance with the UK’s Claire O’Neill (then Perry).

The director of Climate Action Network Canada Catherine Abreu tweeted: “I don’t often talk about politicians publicly. But I’ve spent years watching [Catherine McKenna] exhaust herself in service to the climate & her constituents. Her dedication has achieved real results, even amidst [bullsh*t] misogynist attacks. Huge respect and thanks”.

McKenna was labelled “climate barbie” by a male opposition MP and a gendered term of abuse was spray-painted on a poster of her on her constituency office.

While some environmentalists praised her, others criticised her for backing expansion of the Trans Mountain oil pipeline against protests from indigenous groups.

Canadian skier Trennon Paynter tweeted: “Canada’s percapita [greenhouse gas] is off the charts compared to similar climate countries in Europe, and she threw her support behind expanding [oil and gas] infrastructure when it desperately needs to be reduced.”

According to World Bank data from 2016, Canada’s per capita emissions are more than twice as high as the European Union’s. Oil production rose throughout McKenna’s time in office and Canada is the only G7 country whose emissions have increased the Paris agreement.

She has offered to “support Canada’s international climate leadership” in the run up to Cop26 and continue in parliament until the next election, which will take place in October 2023 at the latest.

Fighting back tears, she told press: “For all the climate change conversations I’ve had in the all the fancy rooms I’ve had them in, the most instructive classroom has been in the natural world.”

She added: “If I forget everything else about my time in politics, I’ll always remember being out in our amazing nature with incredible Indigenous peoples who generously shared their land and traditional knowledge with me.”

Canadian media say her resignation opens up a safe seat in parliament for Mark Carney, the Canadian banker and UN climate envoy who has campaigned for companies to report their climate risks and led a controversial taskforce to scale up carbon offsets.

Carney moved back from the UK to Canada in 2020. His support for Trudeau and McKenna’s centrist Liberal Party had long been rumoured and he openly declared it in April 2021.