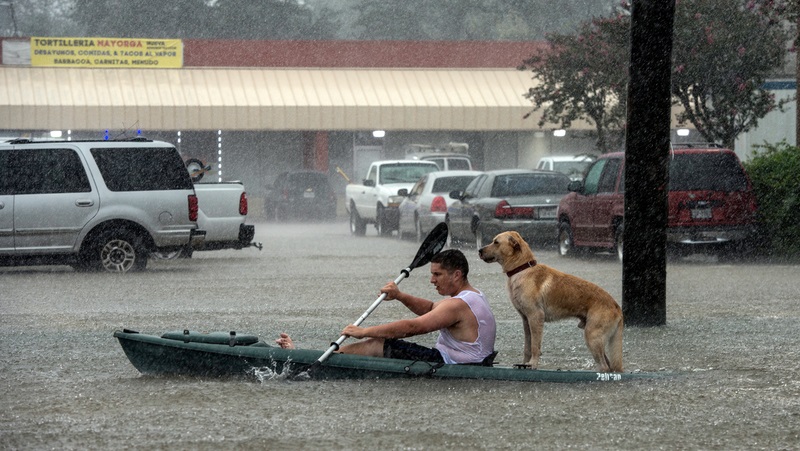 A man paddles during Hurricane Harvey in Houston in 2017. (Photo: Mannie Garcia/Greenpeace)

A cross-party group of senators is working on a scaled down infrastructure bill, to bring Manchin on board and the ten Republican votes needed to get it past the Senate without resorting to a controversial process called budget reconciliation.

This bipartisan package is worth $1.2trn, of which just $579 billion is new spending. That means axing or scaling down several measures to support clean energy and electric vehicles.

As a result, at least four climate-conscious Democratic senators are threatening to revolt, including Bernie Sanders, Ed Markey and Sheldon Whitehouse.

World Resources Institute researcher Joel Jaeger told Climate Home News Biden’s original proposal matched the ambition of US climate targets: a 50-52% emissions cut from 2005 levels by 2030 and net zero by 2050. “The bipartisan proposal at this point does not,” he said.

“This year is the last best chance for America to pass major climate legislation,” he added.

According to Jaeger’s analysis, at least half of Biden’s $2tn bill was to go on sectors under the broad umbrella of climate change, clean energy and environmental justice. The bipartisan proposal is vague, he said, estimating just under $400bn of the $579bn can be categorised as green.

Among the US public, Biden’s infrastructure proposal has wide support with 68% approving of it in an April poll and just 29% against it. Around 32% of Republican voters approve of the plan.

Chandra Farley works on energy and climate for the racial equality organisation Partnership for Southern Equity in the state of Georgia. She told Climate Home News that Biden’s plan could do a lot for Georgia, rural communities and racial equity. But the bipartisan deal “doesn’t mean much” because Georgia’s state government is Republican-controlled and “those dollars have to flow through our state channels”.

“The big opportunity/imperative right now,” she said, “is to make sure we aren’t handed a deal that strips out the transformation of how we define infrastructure for this era and that includes climate and clean energy investments. In southern states like [Georgia] where we already lag behind in clean energy investment, particularly at the community level, transformative spending commitments directed to climate-related projects is critical.”

The biggest difference between the two versions of the bill is in energy efficiency for buildings. Biden originally asked for $213bn to improve the energy efficiency of homes and $100bn for energy-efficient schools.

The bipartisan proposal does not mention energy efficiency. Jaeger said he was surprised building efficiency was left out because it’s “so clearly a win-win – for the home-owners who are going to be saving money on their electricity bills as well as the job-creation potential”.

Get in folks, we’re going to win the competition for the 21st century. pic.twitter.com/B8YWFKlzeo

Tax credits for renewable energy are out. Although solar power is now cheaper than coal and competitive with gas without tax credits, Jaeger said they make financing it easier and help it get implemented faster.

Other Biden proposals falling by the wayside are $35bn fund for cleantech research and a $10bn civilian climate corps.

A fully funded Civilian Climate Corps (CCC) would put young people back to work in our own communities so that we can truly build back better as @joebiden and @kamalaharris say they want to do.

And we can do it all while re-designing our communities and getting paid good wages. pic.twitter.com/2nvDNgOroK

Areas of agreement include $16bn of funding to plug orphaned oil and gas wells and abandoned mines and $25bn to improve and expand US airports.

On the issue of taxing gasoline, the bipartisan proposal would actually put a higher price on pollution than Biden’s. It proposes indexing gasoline tax with inflation.

But progressive Democrats oppose this move, saying it would hit the poor hardest and break Biden’s election promise not to increase taxes on those earning less than $400,000 a year.

The USA currently charges just 14 cents tax on a litre of gasoline, the lowest amount as a proportion of total fuel price of any OECD country but Mexico.

In terms of scale, the only comparable green spending plan is the EU’s recent recovery package and 2021-2027 budget, which contained over $2 trillion of recovery spending.

WRI estimates that round 30% of this spending was on clean measures, compared to 50% of Biden’s bill. Japan’s December 2020 stimulus package was 3% clean while the July 2020 Korean New Deal was 37% clean.

To become law, US bills must be agreed by the House of Representatives, the Senate (which collectively are known as Congress) and the Presidency.

Nancy Pelosi, speaker of the House of Representatives, wanted a bill to be brought by 4 July, US Independence Day. “It’s not clear that’s going to happen,” said Schneider, “but there’s urgency to moving this.”