Fishing in the Marmara Sea has become impossible as marine mucilage blankets the water, blamed on rising sea temperatures and pollution 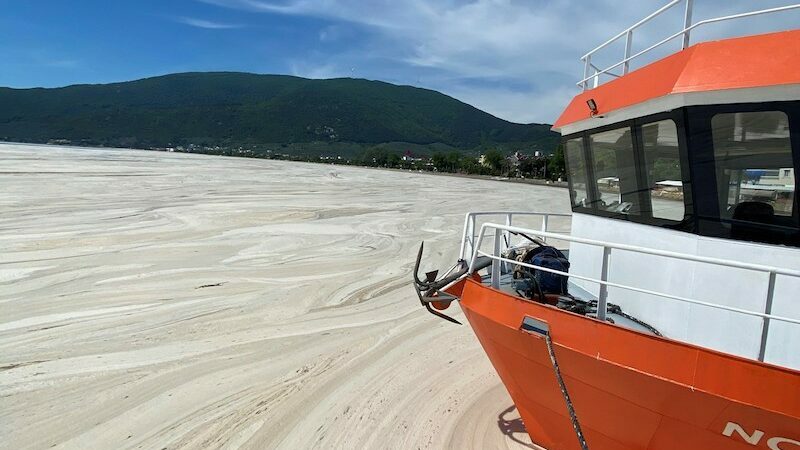 The Marmara Sea in Turkey is blanketed in sea snot, a viscous, slimy substance that kills fish by sucking oxygen out the water (Photo: Ilayda Zorlu)

“You can find whatever you are looking for here, except fish. The fishing industry is dying,” says Ersin Duman, a fisher who lives in the Izmit province, on Turkey’s southern coastline of the Marmara Sea.

“Honestly, if I were a fish, I wouldn’t stay in this mess. We have been in this trouble for four months,” Duman adds.

Turkey is facing a major outbreak of “sea snot”: a thick, slimy substance also known as marine mucilage that floats on the surface.

Outbreaks have become increasingly common in recent decades, linked to rising ocean temperatures, untreated waste, and stagnant water. Mucilage is made up of overgrown phytoplankton, a microscopic algae. It contains microorganisms that harm marine life by sucking up oxygen in the water.

The authorities launched a 22-point action plan last week to clean up the sea in seven provinces along the coast of Marmara.

A thousand people and over 70 ships have taken part in the cleaning operation at 77 different locations. The workers have vacuumed up tonnes of the stuff from the sea surface since last week. The collected mucilage is sent for disposal.

But the sea snot keeps coming, making it impossible to fish, says fisher Turgay Ozcan. “Not only the surface but the seabed has also been fully covered by the mucilage. The mucilage has clogged up our nets so we cannot catch fish. It takes us days to clean our nets from this slimy substance. It has almost brought an end to the fishing industry here.”

Ali Sari, the head of the fisheries cooperative in Izmit province, tells Climate Home: “We noticed smaller amounts of mucilage for many years. However, we have seen these extreme amounts since 2007. It affects the fishing industry adversely. Vessels couldn’t fish this year due to the massive amount of pollution in the sea. I can say that the fishermen made a loss of 80%. We need the government’s help.”

Scientists say the outbreak could have a longer term effect on fish stocks.

“In recent months, many fish died from the lack of oxygen in the Marmara, because the sea snot sucks up the oxygen in the water and suffocates marine life. Fish and other sea animals are not able to live there, “ says Meric Albay, professor at the faculty of aquatic sciences at Istanbul University.

“The large diversity of the sea creatures were really affected by this, even fish were unable to complete their migration. I think that there will be a serious problem especially in fish stocks next year due to their inability to lay eggs and reproduce,” says Albay.

Ilayda Zorlu, a 22-year-old law student who lives on the southern coast of the Marmara Sea, tells Climate Home that the entire sea is covered by a white substance.

“The ships seemed to be standing on land. Nobody understood what happened to our sea. We threw a pebble into the sea, it didn’t sink and lay on the surface of the layer of white substance. I took a photo and tagged Greenpeace in order to do something,” Zorlu says.

“We don’t eat fish from the sea any longer. Normally we swim in the sea every day at this time of year but now we don’t. We fear getting skin cancer due to the polluted water and we think the water we swallow while swimming might damage our visceral organs. It’s good to stay away from the sea and sea products for a while, I think,” she adds.

Italian researchers have found large volumes of bacteria in mucilage, including pathogenic strains not found in the surrounding seawater.

The Turkish government plans to designate the entire Marmara Sea as a protected area by the end of the year. Environment and urbanisation minister Murat Kurum said that after hundreds of inspections, a thermal facility, a fertiliser factory, and three shipyards have been closed. Fines totalling 10 million Turkish lira ($1.16 million) have been imposed on 55 facilities and nine ships that discharged pollution and untreated waste into the sea.

The cleanup operation, which will take three to five years, provides hope for the future of the Marmara Sea, marine scientist Albay says: “If you give a chance to the ecosystem by preventing pollution, overfishing, and protecting the area, the sea will recover itself.”