Many Kenyans are suffering post-traumatic stress, depression and anxiety after being hit by extreme weather, but lack access to mental health services 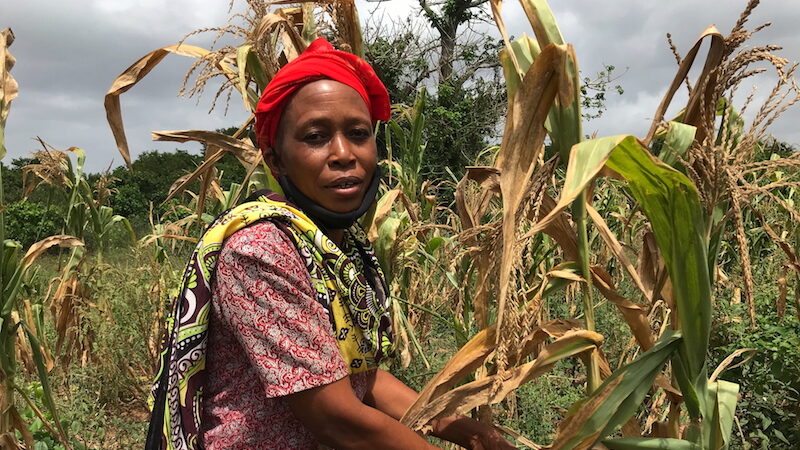 About a year ago, Pauline Yator, a 50-year-old mother of seven from Baringo county in Kenya’s Rift Valley, said she almost went mad.

“The farm I had called home for nearly 30 years was completely submerged, I was in shock and afraid. For two weeks I walked by the roadside speaking to myself,” Yator told Climate Home News. “Questions ran through my mind without answers. How will my children survive? Where do I resettle? It was a difficult time.”

Yator is not the only Kenyan farmer to suffer from severe depression and anxiety. Kenya is facing a mental health crisis, triggered, in part, by climate change. Many sufferers told Climate Home News that losses caused by drought, flooding and other extreme weather contributed to their distress.

According to the World Health Organization, Kenya ranks fourth in Africa for the most number of mental health cases, with 1.9 million people, 4.4% of the population suffering from depression. In June 2020, the government declared a mental health emergency after a recommendation by a task force.

Yator received no psychological support and turned to prayer to cope. Now, a year later, she sustains her family as a fishmonger in Kambi ya Samaki area, along the shores of Lake Baringo. While looking for work, Yator relied on friends and well wishers for financial support.

“When I was at my farm, I had water, firewood all from my farm. Today, I cannot afford to pay my daughter’s university fees – something I did at ease with the farm produce,” she said. 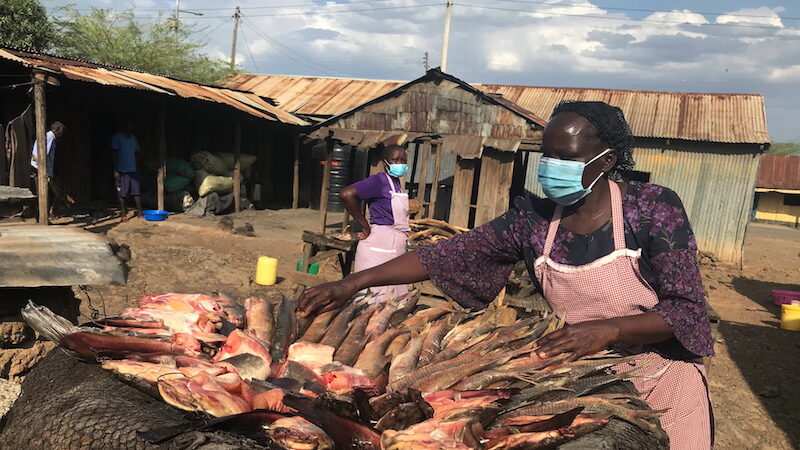 Pauline Yator started working as a fishmonger after she lost her farm to flooding last year. Photo: Sophie Mbugua

As a result, 150 households live in tents an abandoned airstrip while thousands of others depend on strangers, relatives, and friends for shelter, he said.

Homes, schools, roads, health centres, and farmlands were submerged. In November 2019 at least 120 people died and 18,000 were displaced by floods and landslides in Kenya, according to the United Nations office for the coordination of humanitarian affairs.

The Baringo county deputy governor Jacob Chepkwony told Climate Home News that 3,087 households were displaced after flooding damaged their homesteads. More than 85 are disabled and older people, and overall damage to housing and shelter is estimated at 1.2 billion Kenyan shillings ($11m), he said.

Africa accounts for only 2–3% of the world’s carbon dioxide emissions from energy and industrial sources. Data analysis shows that the one billion people who live in sub-Saharan Africa are responsible for just 0.55% of global emissions.

But despite its tiny contribution to global warming, cyclones, landslides, droughts and floods are becoming more intense and frequent in this region. The western part of the Indian ocean is warming faster than any other part of the tropical ocean while temperatures are rising 1.5 times faster in the Sahel than the global average, said Abubakar Salih Babiker, a climate scientist at the IGAD Climate Prediction and Applications Center (ICPAC).

Babiker told the Climate Home News that extreme events such as floods, droughts, and landslides are happening faster than the community’s ability to recover from previous natural disasters.

“Over the last 30 years, the minimum temperatures in most parts of East Africa have increased by 1.2C and the maximum by about 2C, higher than the lower target of the Paris Agreement, said Babiker. 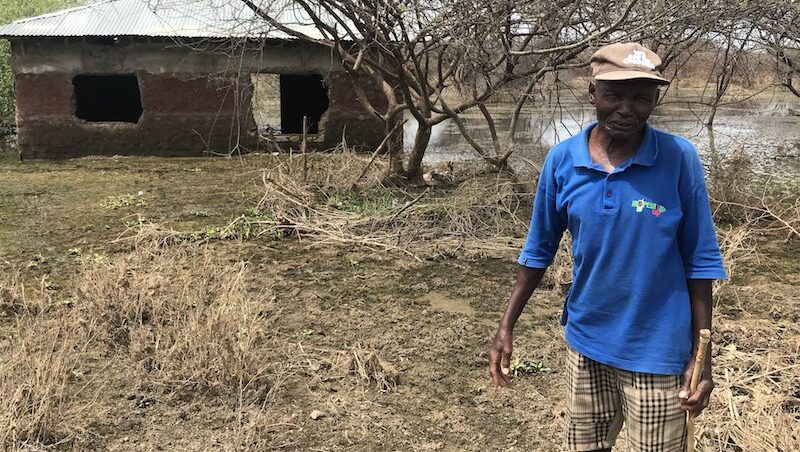 Jeremiah Cheptirim, a 76-year-old father of seven, stands in front of his house destroyed by flooding from Lake Baringo, Kenya (Photo: Sophie Mbugua)

Yator is not the only one whose life was turned upside down by natural disasters.

Jeremiah Cheptirim, a 76-year-old father of seven, from Ng’enyin village has been displaced three times since 2018, when his 30-acre farm was entirely submerged. His 71-year-old wife, Targok Bartogos, and five grandchildren have been squatting in a tent at the edge of their neighbour’s land. Bartogos cannot sleep at night.

“It’s too cold at night. Questions run through my mind wondering when we will manage a decent house. The hippopotamus defecates outside the tent every night. I have grandchildren in this tent, what if some day it decided to attack?” said Bartogos.

Over the years, Cheptirim has lost 30 cows, 16 goats, and 24 sheep to pneumonia and crocodiles.

Shadrack Chalo from Garashi village in coastal Kenya supported his six children through farming. His village has experienced drought since 2019, but the river flooded following heavy rains upstream and broke its banks.

“The floods destroyed my farm, carried away the generators, the irrigation pipe, and all other farming equipment I had bought. Due to lost income, I had to transfer my children to public schools.

“The problem was – where do you start? It takes time to plant and wait for the coconut trees and bananas to mature and earn you money. When all these trees die suddenly, the entire farm is destroyed, all cows are dead overnight from floods, and given some of us are old without the energy to start over, stress and death are inevitable for most of the farmers. Stress is our biggest challenge,” Chalo said. 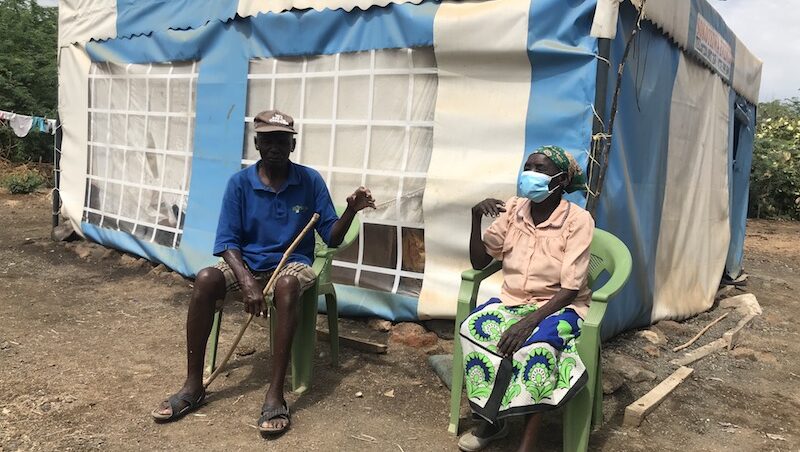 Jeremiah Cheptirim and his wife Targok Bartogos sit outside the tent they have been living in since their house was flooded. Photo: Sophie Mbugua

In December 2019 the Kenyan government established a task force on mental health. Its review found out that of all medical patients at least 25% of outpatients and 40% of inpatients suffer from a mental illness. Climate change is identified as a contributing factor to mental illness, particularly post-traumatic stress disorder.

Kenya is not the only African country with a heavy mental health burden. In Nigeria, Health Think Analytics says 7 million inhabitants suffer from depression. WHO estimates that while 650,000 Ghanaians have a severe mental disorder, a further 2.1 million suffer from a moderate to mild mental illness.

In Ethiopia, a national health survey on depression identified that 9.1% of the population suffers from depression.

“Mental health issues are often forgotten amid the other life-threatening disasters like coronavirus, storms, droughts, and floods,” Boniface Chitayi, a consultant psychiatrist with the ministry of health and president of the Kenyan psychiatrist association, told Climate Home News.

Chitayi said events such as loss of property, loved ones, job loss, and forced migration, tend to cause higher rates of depression, and anxiety.

“Stressful events can trigger most serious mental illnesses like schizophrenia, substance use and abuse as a way of coping with increased stress,” Chitayi said.

Sidi Toya from Kilifi County said since the floods, her two children wake up screaming at night. Over the years, their school grades, and ability to respond to the teacher’s questions have worsened.

“Before the flooding, they would sleep soundly uninterrupted at night. We have gone to the hospitals seeking professional help, but the medics say the children are not sick. As parents, we do not know what to do next. We are not able to seek help beyond this village,” said Toya.

Countries like Kenya do not have a separate budget for mental health.

“Mental disorders account for at least 13% of all diseases but its allocation has been 0.1% of the entire budget. Counties in Kenya are not fully sensitised about mental health and their role. As temperatures and mental illnesses rise, Kenya needs a mental health budget that is separate from the overall health budget whose percentage reflects the burden of mental health illness in our country,” said Chitayi.

Cheptirim is planning to relocate his family again. He has identified a piece of land on a safer ground but has no financial means to construct a house. He depends on friends to raise over 300,000 shillings ($3,000) to build the house and relocate.

“I have managed to purchase land in a safer ground, but I have nothing left to build. I have talked to a few friends hoping someone with a soft heart can help with whatever amount they can manage. My only wish is to get my family to safety and warmth,” he said.