UN agencies are urgently calling for international support as a million Madagascans go hungry, with some surviving on insects and wild roots 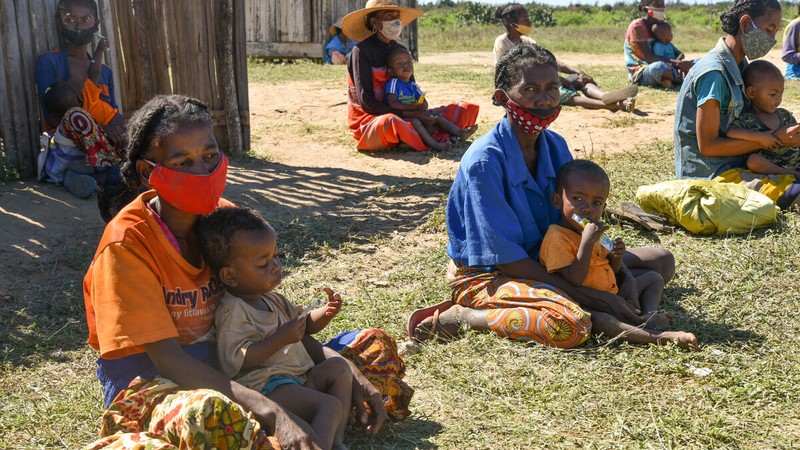 Southern Madagascar is in crisis with more than a million people facing acute food insecurity as the region suffers its worst drought in four decades.

The World Food Programme (WFP) and the Food and Agricultural Organisation (FAO) are pleading for help from the international community, warning that 14,000 people are facing famine and that “lives are at stake as hunger tightens its grip” in the region.

For the first time since a methodology to rank food security threats was introduced in 2016, people have been recorded in the “catastrophe” category – the highest level of the five-step scale describing people who have exhausted their coping strategies.

In the space of a few months, the situation has worsened “in an exponential manner,” Theodore Mbainaissem, head of WFP’s Ambovombe office, in southern Madagascar, told Climate Home News. The future looks “even more catastrophic,” he added.

Swathes of the population on the island’s most southern areas have resorted to eating insects, wild roots, and a mixture of white clay with tamarind juice, he said.

“These are foods that are not at all nutritious but people are eating them just to fill them up and not die of hunger,” Mbainaissem said.

The crisis is hitting children hardest, who are not getting the necessary nutrients to develop properly. In some villages, dozens of deaths have been recorded, Mbainaissem added. 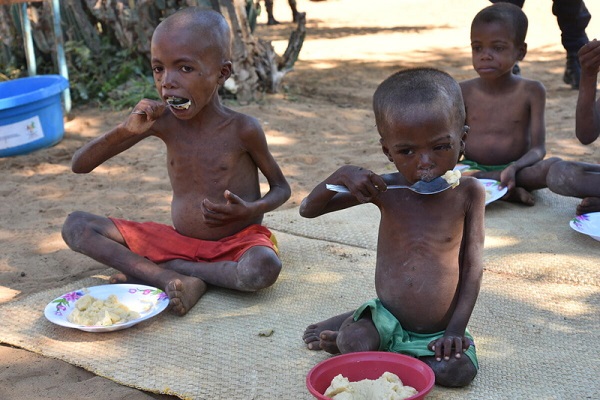 Five of the last six years have seen below average rainfall in the southern tip of the country. The severity of the current drought has not been seen since 1981 and has been building over the last three years.

This year’s harvest of crops such as rice, maize, cassava and pulses is expected to be less than half the five-year average, according to the WFP and FAO.

Climate change is expected to increase the frequency of extreme weather events in Madagascar, such as droughts in the southwest and cyclones in the south east of the country.

Projections show the south of the country is most vulnerable to rising temperatures, reduced rainfall in the dry season and increased variability in the distribution of rainfall – a combination that adds to food security challenges. 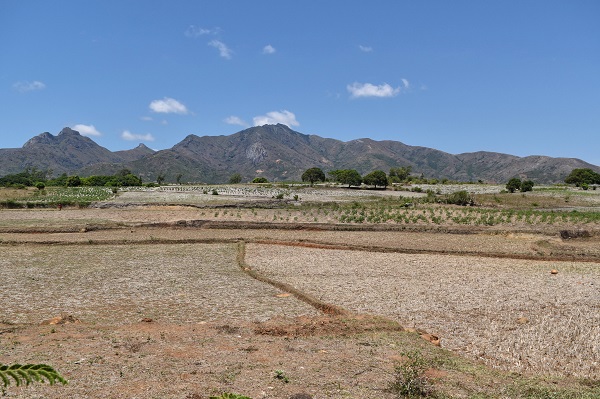 In the district of Amboasary Atsimo, where three quarters of the population are lacking food, 27% of people suffer from acute malnutrition – “alarming” levels that are already causing “irreversible damage to children” the WFP and FAO have said.

The Integrated Food Security Phase Classification expects the number of people in the “catastrophe” category to double during the lean season between October and December, when food stocks are usually low. The number of people experiencing acute food security could reach nearly half of the Grand South region of Madagascar’s 2.7 million people.

“We are going to have to multiply our plea for help so that the international community turns its attention to what is happening in the south of Madagascar because we have the impression that this crisis has been forgotten,” Mbainaissem said. 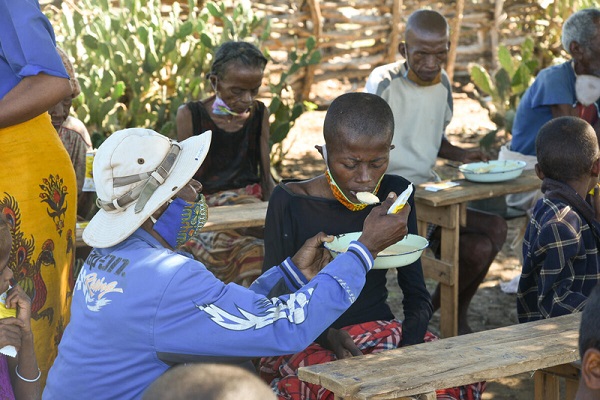 Madagascar has among the highest poverty rates in the world and ranked as the fourth most vulnerable nation to climate impacts in the 2020 Global Climate Risk Index.

Around 80% of its 28 million people live in rural areas. Most people in the south of the country depend on rain-fed, small-scale agriculture to survive.

In the past year, streams, rivers and small dams built for irrigation have dried up. Those who were able to plant cassava and potatoes are digging them up early, desperate for food or an income as prices on the market soar. In some areas, locust invasion has destroyed fields of maize. 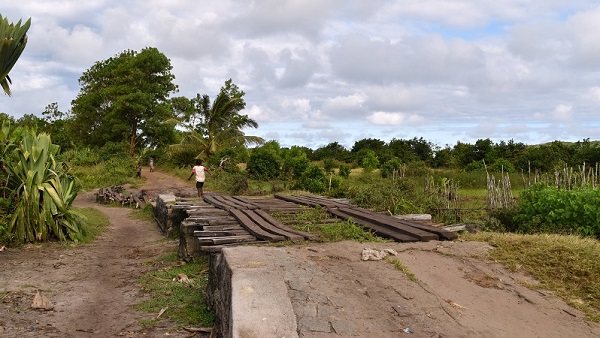 Years of deforestation and soil erosion have sped up the desertification of land which once produced food. Earlier this year, unprecedented sandstorms swept across large areas of agricultural land, covering fields in sand and stopping seeds from growing – a phenomenon that affected much smaller areas in the past.

Drier soils and higher temperatures caused by climate change, coupled with deforestation, could have contributed to the event, experts say. 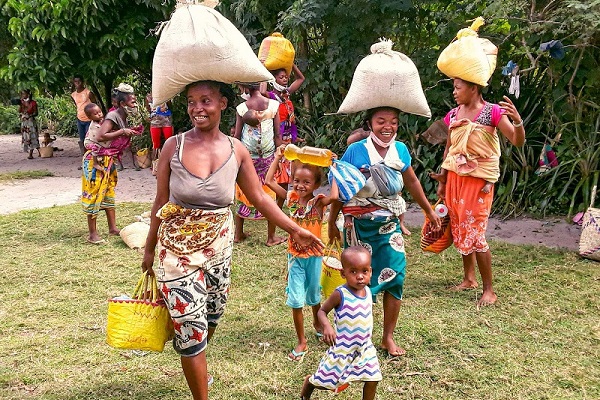 Since October, the government and the WFP have distributed food, largely rice, pulses and vegetable oil, to around 750,000 people as well as therapeutic food to address malnutrition in children and pregnant women.

But Mbainaissem said the resources of UN agencies did not meet the growing demand for assistance at a time when the delivery of humanitarian aid is being delayed by Covid-19 restrictions and the halt of all flights into the country.

The WFP has called on the international community to mobilise $74 million to avert a disaster over the next six months.

“We are between the devil and the deep blue sea now,” said Sylvestre Mbola, of the development charity Seed Madagascar, which is raising funds to distribute food in rural villages in the Anosy region.

“People in other places only have one enemy which is just Covid-19 while here in Anosy, we have both Covid-19 and famine as enemies,” he said.

Lisa Bass, director of programmes and operations at Seed Madagascar, told Climate Home the international community had long overlooked Madagascar’s development challenges, making it much harder to secure funds from donors in time of crisis.

More resources are needed to allow the government and donors to articulate “a long-term strategy across the whole of south [of the country] that really targets climate adaptation and supports communities”, she said, rather than focusing on short-term projects. 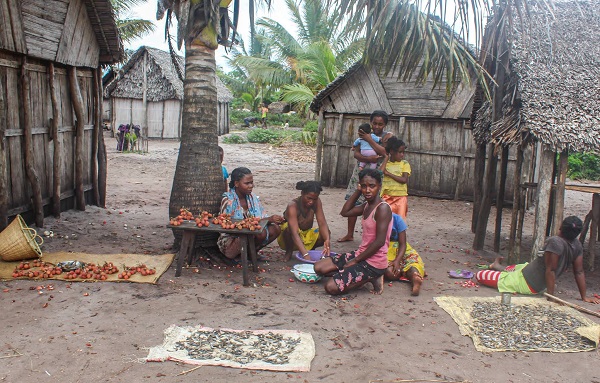 For the FAO, adaptation means developing more climate-resilient agricultural livelihoods. Together with the Malagasy government, the FAO has supported around 20,000 farming families in the region by providing fast-growing vegetable seed packs and training in drought-resilient farming strategies.

Identifying areas where irrigation could be developed, rolling out nutritious and drought-tolerant crops such as sorghum and some varieties of sweet potato, and reforesting areas to increase water retention in soils will be necessary to improve resilience, he said.

But even measures like these might not be enough to compensate for insufficient yields across the region, Ranoasy warned. “If the drought continues in the next few years, we will be forced to transfer some population away from the worst affected areas.”

In recent months, thousands of people have left their rural communities and migrated to towns, looking for work and food. “That is very concerning. Those arriving in cities are already very weak and if there is no work, it risks sparking insecurity,” Ranoasy said.

Instead, he believes the government should start identifying areas where people from the south could resettled and cultivate the land. “We should have a managed migration and a real politic of access to agricultural land.”