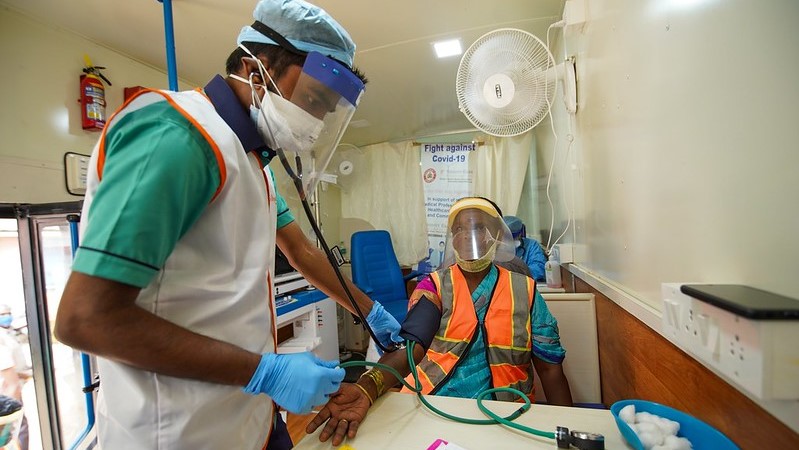 Indian climate analysts and journalists are among thousands of people across the country putting their work on hold to help save lives from a catastrophic second wave of Covid-19 infections.

Desperate for oxygen, hospital beds and medical supplies, friends and relatives of people infected with Covid-19 in India have taken to social media to plea for help.

The stream of requests under hashtags such as #SOSDelhi and #CovidSOSIndia are far ranging: from sourcing oxygen cylinders, ventilators and beds in intensive care units to looking for plasma donors, ambulances and testing kits and arranging delivery of critical medical supplies and food across states and cities.

With no central helpline operated by the government, social media users are filling the gap. From their phones and laptops, thousands of people are giving up their time to help connect those in need with oxygen vendors and hospital administrators.

“There are no end to the requests. It’s hard to stop once you have started,” Siddharth Singh, a climate and energy researcher from Delhi, told Climate Home News.

Every 30 minutes, Singh checks his social media account for messages of people needing help and keeps tabs of the latest information being shared by official sources. In recent weeks, he has spent around 40% of his time connecting people through Twitter and Facebook to life-saving medical assistance.

“Most homes have somebody, maybe a relative or a friend, that is down with Covid-19 right now. Certainly everybody that has a social media presence just has to help out,” he said.

🆘🆘🆘
Triton hospital in Nehru Enclave, Delhi, has just about one hour of Oxygen left. It is a non-Covid children’s hospital and has atleast 10 children who are on Oxygen and 6 who are on ventilator support. Please help. Contact Dr. Deepali Gupta 8860747416
Verified at 9:20 🆘

India accounted for nearly half of all cases and a quarter of all deaths from Covid reported worldwide last week, according to the World Health Organization.

The entire Indian delegation to a meeting of G7 foreign ministers in London this week was forced to isolate after two of its members tested positive to Covid-19. Ministers were due to discuss fairer vaccine distribution for poorer nations.

The scale of the crisis in India has raised further questions over whether critical Cop26 climate talks will be able to go ahead in person this November, as the UK host has been insisting.

Exasperated frontline workers, a patient left to check his own health, the wait for the final journey and the cremation — @AmarjeetKSingh_ continues to click the endless cycle of tragedy that repeats every day in Delhi pic.twitter.com/yF3Csf2STa

As infections started to rise sharply at the start of April, the climate community in India was busy with a flurry of diplomatic events, including US special climate envoy’s John Kerry’s visit to Delhi. If, when and how the nation could reach net zero emissions was rising up the agenda.

The momentum for climate action that had been building since the start of the year “has been broken very badly,” said Swati D’souza, research lead for climate action at the National Foundation for India. “Cop26 now seems very far away.” 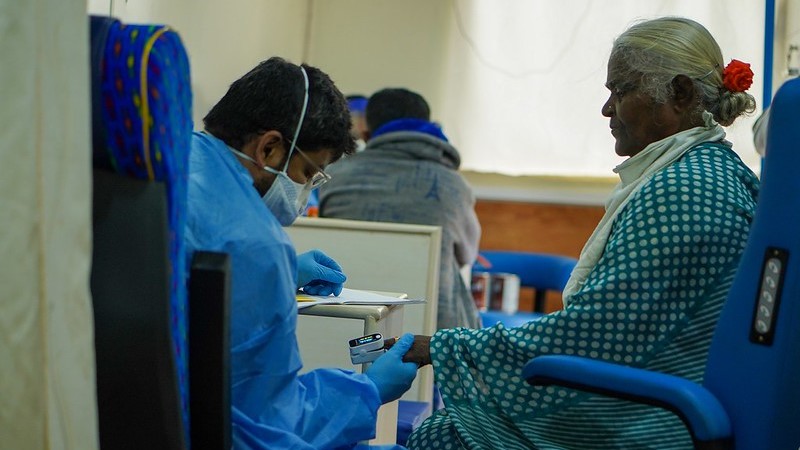 An elderly woman is tested for Covid-19 in a village in southern India (Photo: Trinity Care Foundation/Flickr)

On the face of it, climate diplomacy has continued through the crisis, with UK prime minister Boris Johnson and Indian prime minister Narendra Modi agreeing to deepen collaboration on clean energy deployment and forest protection in a virtual meeting on Tuesday.

But for Singh and D’souza, responding to the public health emergency has meant putting their work on hold.

“Some of the work that we would have liked to have done ahead of Cop26 is not happening. We will be going into the Cop with much less preparations,” said Singh, who now spends a large part of his time pulling together updated contact information for hospitals, oxygen distributors and emergency services and making calls to verify available stocks.

“I would rather not be doing this,” he said. “People would not have to do this if the government was doing its job.”

“We are running out of Oxygen. We are in a crisis mode”: Executive Director of Delhi’s Batra Hospital sends SOS #OxygenShortage pic.twitter.com/Glwo8ORNnd

Before the crisis, D’souza was working to develop transition pathways for coal mining communities in three Indian states, which she was planning to visit this month, and was hoping to publish her findings ahead of Cop26.

“But work has been more or less completely on the back burner,” she told Climate Home from her home in Delhi. “If you don’t value human life now, when are you ever going to?”

For the past month, D’souza has been working full time to help source oxygen and hospital beds to people who need it most.

As resources become scarce, the time dedicated to each request has grown with up to three days needed to find a bed in intensive care. At times, the relentless of calls of people needing help has taken its toll.  “I’m an energy researcher, I am not trained to handle people’s grief,” she said.

For Ulka Kelkar, director of the climate programme at the World Resources Institute India, the impact of the situation on people’s mental health has made any other work “difficult right now”.

From her home in Bangalore, she watched as her colleagues across the organisation started failing ill. “It was a very difficult situation that was very stressful for everyone. We could do nothing else but to watch the suffering. This is a disaster of epic proportion,” she told Climate Home.

To cope, the team agreed to extend deadlines and prioritise supporting their families and friends.

For Kelkar, this involves reaching out to the community of climate researchers, analysts, and journalists to create a mental health support network. “I feel very strongly that we must hang on to what is true that most people are recovering from Covid-19… because otherwise we’ll only sink into despair.”

Mayank Aggarwal, an environmental journalist and contributing editor to Mongabay India, has found his silver lining in “the army of selfless volunteers” who have dropped everything to help address the Covid-19 crisis.

“These are unsung heroes who will never get the light they deserve and that has really touched me,” he told Climate Home.

After members of his multigenerational household tested positive in Delhi at the end of March, Aggarwal has dedicated his time to connecting people and amplifying calls for help on social media, particularly from rural and tribal areas which have received far less public attention. “I am not even a small cog in a whole wheel of the whole structure,” he said.

“People stepped up where the government failed. Had the authorities prepared, we would not be in the position that we are in right now. We are simply ignoring the signals. The pandemic is a minute example of the impacts the climate crisis could have.”