The urban poor in Nairobi, Kathmandu, Quito and Istanbul will lose out from deep budget cuts to the UK-backed Tomorrow’s Cities programme 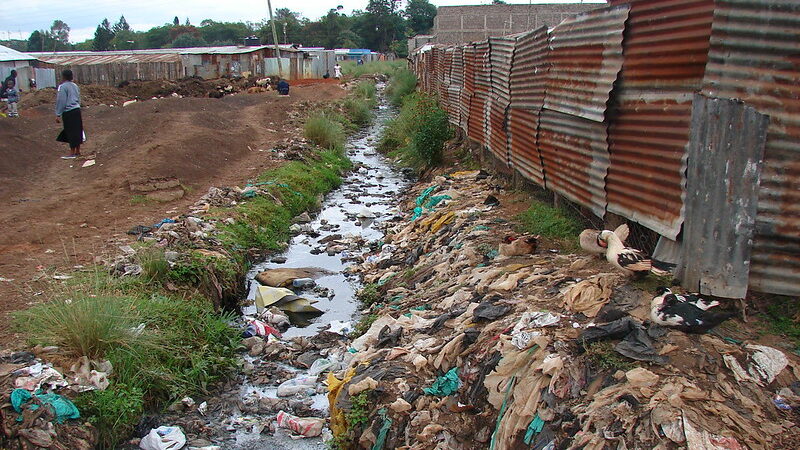 Nairobi's slums are vulnerable to flooding, fires and other hazards. (Photo: Flickr/computerwhiz417)

The UK government’s cuts to a disaster resilience programme will endanger poor communities around the world facing increased flooding and fires because of climate change, researchers have warned.

The Tomorrow’s Cities programme, which aims to reduce the disaster risk for vulnerable communities around the world, has had its budget cut by 70% this fiscal year from £4.8m ($6.7m) to £1.4m ($2m). The UK has slashed its overseas development assistance from 0.7% to 0.5% of its national income.

Marina Apgar, the programme’s impact lead said they would have to scale down projects in Nairobi and Kathmandu and stop much of their work in Quito and Istanbul: “Cancelling planned collaborations across the world will damage the UK’s reputation,” she said.

For the intended beneficiaries, Apgar said, “the cut to programme funding means that their exposure to risk will remain high, opportunities of co-produced research to build community resilience will be lost. In some cases, this could potentially result in direct harm to properties, livelihoods and potentially even death.”

The programme’s Nairobi lead Joanes Atela told Climate Home News: “These cuts expose the urban poor to more disaster risks, directly harm the life chances of the most vulnerable today, and could potentially erode partnerships gained by the UK over the last few years.”

Tomorrow’s Cities is a research hub which runs projects in these four cities in collaboration with local researchers and scientists. More than two billion people living in cities worldwide face disaster threats, according to Tomorrow’s Cities.

The five-year programme is backed by the UK Research and Innovation agency (UKRI), which recently announced that it faces a £120 million ($167m) gap between its planned spending and the money it has been given for this financial year.

Researchers leading the projects in Nairobi and Kathmandu told Climate Home News that the cuts are reversing their efforts to build safer, more resilient cities during the coronavirus pandemic, and have eroded trust in the UK as a partner.

The Tomorrow’s Cities team in Nairobi is working with local authorities and the British Red Cross to help people living in informal settlements prepare and recover from disasters such as flooding.

Over two million people live in informal settlements in Kenya’s capital. These settlements are extremely vulnerable to flooding, fires and other hazards, said Atela.

In Nepal’s capital Kathmandu, scientists from Tomorrow’s Cities were researching how to make slums more resilient to flooding, working closely with local communities and the government.

Nepal’s carbon emissions per capita are among the lowest in the world, but the country is highly vulnerable to natural disasters and the impacts of climate change. Between 1980 and 2017, natural disasters such as floods, landslides and earthquakes, caused 21,000 deaths, impacted the livelihoods of 13 million people, and resulted in losses of $5.9 billion.

Collaboration with UK universities has ceased as a result of the cuts and engagement with local communities has stopped, he said.  Without proper research to back up policy recommendations, local authorities are unlikely to adopt more resilient measures. “This all risks being lost,” he said.

In a press briefing ahead of next week’s Petersberg Dialogue, Greenpeace International director Jennifer Morgan said she hoped the UK would “come forward with something which demonstrates that they’re not going to be cutting their overseas development assistance but actually be increasing it”.

When the government announced its plan to slash foreign aid, environmental groups warned in an open letter that the cuts would worsen the climate crisis and undermine a core aim of Cop26: increasing support to vulnerable countries.

Last month, leaked documents from the UK’s foreign and development office obtained by openDemocracy revealed that cuts were planned across some of the world’s most climate vulnerable nations, including South Sudan and Somalia.

This week WaterAid criticised the government for slashing funding for overseas water and sanitation projects during the pandemic. According to a leaked memo obtained by Sky, funding for these programmes will be cut by 80% this year.

The charity’s CEO Tim Wainwright described the cuts as “savage” and said water and sanitation provide “the first line of defence against the twin threats of Covid-19 and the impacts of climate change.”