Climate diplomats agreed to hold an informal and extended virtual meeting in June, despite connectivity concerns, to make progress on sticky issues 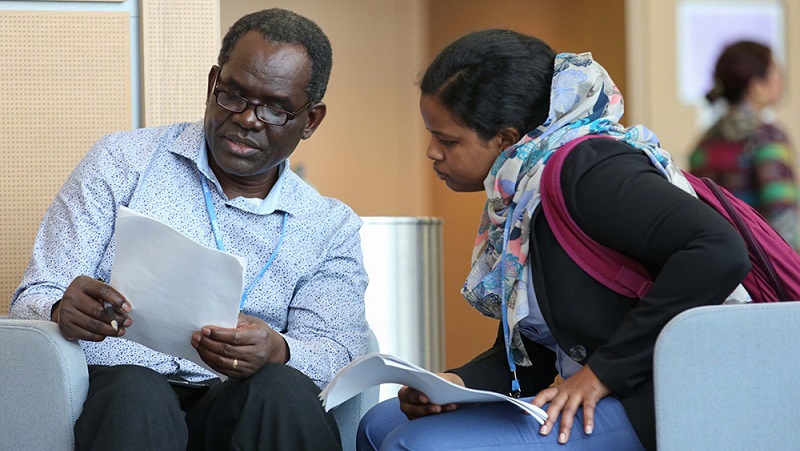 Delegates at the interim Bonn climate talks in Germany in June 2019 (Photo: IISD/ENB | Kiara Worth)

Critical discussions to prepare for November’s Cop26 climate summit will take place virtually over a three-week period in June, but no decisions will be made.

The compromise was agreed on Thursday evening by the UN Climate Change bureau, a group of top diplomats representating each of the UN’s regions, after months of speculation and tensions over how climate talks can resume.

It follows calls by both UN chief António Guterres and the UK Cop26 presidency to hold formal negotiations online and avoid further delays. Resolution on the most contentious elements of the Paris Agreement rulebook, notably around carbon trading, is long overdue.

The talks, which are usually held over a fortnight in the German city of Bonn, have been extended to a three-week meeting, scheduled from 31 May to 17 June.

This will help accommodate different time zones and ensure negotiating groups are able to schedule coordination meetings in between sessions, UN Climate Change said in a statement.

Discussions during the meeting will remain informal, which means that no agreement will be adopted until diplomats can meet in person.

The idea is to allow negotiators to discuss potential compromises on a number of contentious issues and work towards a draft text that could be ready for approval when physical talks resume.

Details on how the meeting will run are expected to be shared with countries in three weeks’ time.

“It’s progress,” one bureau member told Climate Home News. “This may not be the ideal scenario, but it provides a basis to do some serious work and catch up with some of the delays.”

Today, the Bureau of @UNFCCC agreed to hold a virtual meeting from 31 May 2021 to 17 June 2021. Progress on #ClimateChange is indeed a top priority in the international agenda. The importance of the June sessional period is even greater this year considering the urgency👇 pic.twitter.com/KHcRDgRnwL

In a letter sent to all parties ahead of the meeting, Cop26 president designate Alok Sharma urged nations to support holding formal negotiations online.

“Frankly, they are no substitute for formal sessions,” he wrote, but he added “it is clear to me that we cannot afford to put formal work on hold.”

Quamrul Chowdhury, of Bangaldesh, a lead negotiator for the group of least developed countries (LDC), told Climate Home News the decision was “second best” and it would be challenging for developing nations with poor connectivity. But “we have no options,” he said, because progress had to be made this year.

Tanguy Gahouma-Bekale, of Gabon, chair of the African Group of Negotiators (AGN), called for extra talks to be held in person between July and September if possible, or right before the start of Cop26 in November, so decisions could be made.

“The AGN supports the need to maintain the momentum for climate action and to support parties in their efforts to address climate change urgently,” he said.

The @UNFCCC COP Bureau has agreed to hold a virtual meeting from 31 May to 17 June. Must maximize progress and minimize delay of #ClimateAction but key to ensure full and effective participation of all. The voices of the vulnerable must be heard.

UN Climate Change said the arrangement followed the principle of “maximizing progress and minimizing delays” and would allow negotiators to “advance the extensive work that needs to be addressed” ahead of Cop26.

The secretariat will provide the support needed to ensure “full and effective participation” of all parties “in a fair and inclusive” way. Observers will be able to participate “in the same manner as during in-person meetings,” it added.

Guterres previously said he had instructed UN officials to make offices and venues around the world available for negotiators to participate in virtual talks, creating regional hubs with stable internet connection.

Diplomats are due to finalise a number of unresolved issues in the Paris Agreement rulebook, including the design of an international carbon market and common timeframes for national climate pledges.

Negotiators have taken part in informal discussions and consultations online but no formal negotiations since the Cop25 summit in Madrid, Spain, in December 2019.

A UK government spokesperson said: “We are working tirelessly to deliver a safe, successful Cop26 in Glasgow this November and want to be able to hold this in person. As hosts, we recognise how urgently the world must come together to agree action to tackle climate change.”

The UK government says it is assessing a range of options to make Cop26 a safe in-person event but has repeatedly declined to share its scenario planning with Climate Home News.