Uganda and Tanzania have given political backing to the 1,445km East African Crude Oil Pipeline, but climate campaigners are deterring investment 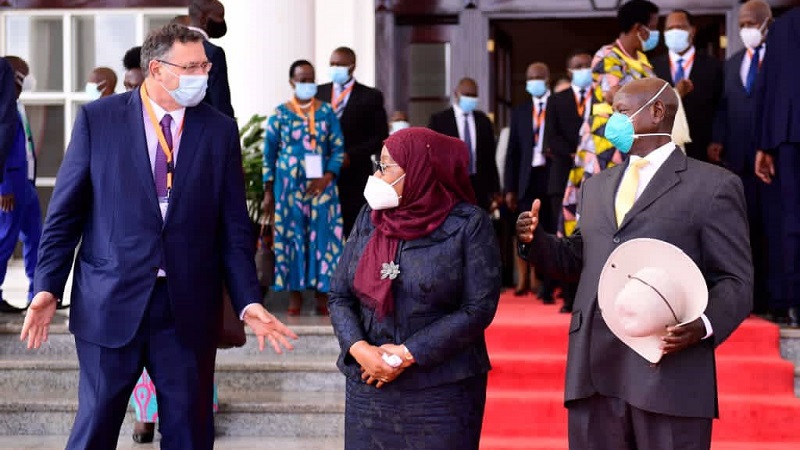 Total has signed an agreement with Uganda and Tanzania to start the construction of a $3.5 billion pipeline to export Ugandan crude oil to international markets, despite not having secured funding for the project.

During a signing ceremony at the Ugandan State House in Entebbe on Sunday, Total and its partner, the Chinese state-owned company CNOOC, agreed to green light the production of oil in western Uganda and channel it through a 1,445 kilometre pipeline to the Tanzanian coast.

A total of 230,000 barrels of oil are expected to pass through the East African Crude Oil Pipeline (Eacop) at full production, with Total hoping to begin oil export in early 2025.

In a statement, Total said all partners “concluded the final agreements required to launch this major project” that allows contracts to be awarded and construction to start.

But a final investment decision, which has been expected since the end of 2020 and was tipped to be announced this month, has yet to materialise. The oil production and export project hinges on Total and CNOOC securing $2.5bn in international loans.

A spokeswoman for Total told Climate Home News the company was “working in parallel on the financing of Eacop” and that the agreements reached on Sunday were “important milestones to progress on this important issue”.

“Like some other major projects, financing will be finalised at a later stage,” she said.

“Negotiations have been long, too long maybe,” Total’s CEO Patrick Pouyanné said at the signing ceremony, nearly four years after an initial agreement was signed between the Ugandan and Tanzanian governments to develop the project. “But now we have put in place a solid framework that should allow all of us to deliver this project.”

Without finance, the pipeline is “still far from a done deal,” said David Pred, executive director of Inclusive Development International.

Total and CNOOC “are going to struggle mightily to find enough banks and insurance providers willing to associate themselves with such a reckless project and assume its manifold risks on their books,” he said.

As investors face pressure to move away from fossil fuels, campaigners have been furiously lobbying international banks to stifle funding support. A consortium of 263 organisations wrote to the CEOs of 25 banks urging them to steer clear of the project.

A handful of banks have publicly distanced themselves from the project, including Barclays and Credit Suisse.

Last month, the UK government ruled out supporting the pipeline after it agreed to end support for overseas fossil fuel projects from the 31 March, with limited exceptions for gas-fired power.

An oil and gas expert in Uganda, who asked to remain anonymous, said the move dealt a blow to Total, which had asked UK Export Finance (UKEF) to consider backing the pipeline.

Ryan Brightwell, researcher at BankTrack, described UKEF’s rejection of the project as “embarrassing”. “Given the continuing human rights impacts and the huge risks to water, climate and nature from the project, many financiers are choosing to stay away,” he said.

In Uganda, the Africa Institute for Energy Governance is urging lawmakers not to approve loans to the national oil company for the development of the project.

The pipeline route runs through a number of sensitive biodiversity areas and wetlands of designated international importance. Campaigners have warned it threatens protected wildlife habitats and water sources for millions of people. Thousands of people are facing displacement to give way to the project.

When burned, the oil transported by the pipeline will emit 33 million tonnes of CO2 a year, according to NGOs’ calculations.

Lucie Pinson, of the campaign group Reclaim Finance described Total’s decision to move forward “with opening a new oil frontier in Africa is in blatant contradiction to the CEO’s attempt to depict the oil major as a climate-conscious, responsible, multi-energy company”.

Total said all partners in the project were committed to implementing it “in an exemplary manner and taking into highest consideration the biodiversity and environmental stakes as well as the local communities’ rights”.

The developments are “major projects for Total and are consistent with our strategy to focus on low breakeven oil projects while lowering the average carbon intensity of the group’s upstream portfolio,” Total’s Pouyanné said in a statement.

Ali Ssekatawa, director of legal and corporate affairs at the Petroleum Authority of Uganda, told BBC World Service that in case of tension between national law and international standards “the strictest environmental standards should take precedent” to ensure “the project co-exists with nature”.

In a joint statement, Uganda and Tanzania said that “all outstanding issues related to the Eacop project have been amicably resolved” and that both countries will take the necessary step to implement the project.

Uganda president Yoweri Museveni said it had taken 15 years to kickstart Uganda’s oil industry but that the pipeline could now benefit the whole east African region, citing oil development prospects in the Democratic Republic of Congo and in South Sudan.

“This pipeline could turn out to be a very important project that may serve the region, not only in the short term but also in the medium, if not in the long term,” he said.