Bottom-trawling for fish releases more carbon dioxide each year than Germany, a study has revealed, yet this is not included in national carbon accounts 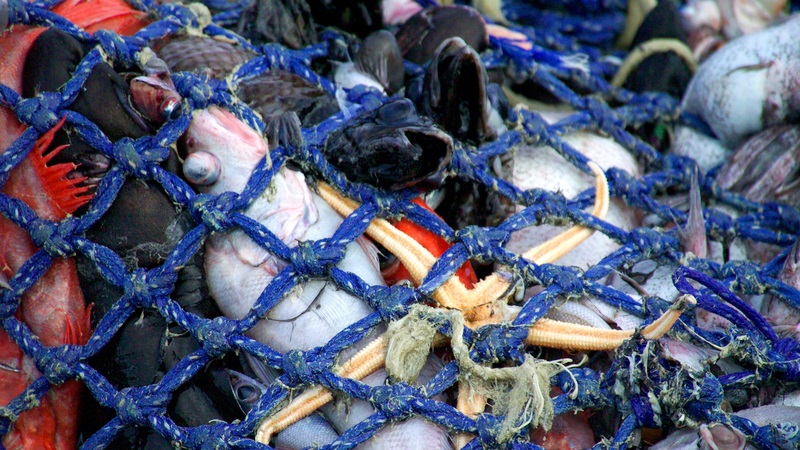 A group of scientists and economists are pushing for bottom-trawling fishing emissions to be added to nations’ greenhouse gas inventories, as a study reveals the practice is responsible for 1 billion tonnes of underwater emissions every year.

Trawlers catch fish by dragging nets along the seabed. This process disturbs the carbon stored in sediment, releasing it as carbon dioxide and acidifying the ocean. The annual emissions from this practice are greater than those of Germany, according to the study published in Nature.

Although these underwater emissions cannot be translated directly to atmospheric emissions, study co-author Trisha Atwood said a “substantial” amount ends up in the atmosphere.

The researchers aim to estimate this amount by the end of 2021. This will make it possible for bottom-trawling emissions to be included in countries’ greenhouse gas inventories.

Atwood, one of the study’s 26 authors and assistant professor of watershed sciences at Utah State University,  said the study showed bottom-trawling was “a huge emitter”.

“This paper says ‘hey, we need to be paying attention to this and we need to be incorporating this into countries’ emissions'”, she told Climate Home News.

The ocean absorbs about 30% of man-made carbon dioxide emissions. Releasing more CO2 underwater reduces the amount the ocean can absorb from the atmosphere.

For some coastal countries, counting this released carbon would drastically alter their emissions figures. For example, the study estimates that Croatia’s bottom-trawling CO2 emissions are 23m tonnes a year. If they were all attributed to Croatia’s official greenhouse gas inventory, it would more than double.

The study used publicly available satellite data on ships’ whereabouts to estimate the scale of bottom trawling across the world. It found that the regions with the most bottom trawling emissions were East Asia and Europe.

China is responsible for 769m tonnes of underwater CO2 a year while the EU released 274m tonnes.

These emissions are not included in nations’ greenhouse gas inventories.

Their methodology is set by an Intergovernmental Panel on Climate Change (IPCC) taskforce, co-chaired by Eduardo Calvo Buendia, professor of environmental sciences at the National University of San Marcos in Peru.

Buendía told Climate Home News that “if a country develops a robust methodology it may include [bottom-trawling emissions] as category Other”. This would give nations the choice of including these emissions or not until a methodology is agreed in the UN and made mandatory.

The last review of the methodology was in 2019. The date of the next review is to be determined by national delegates to the IPCC.

Atwood said that there are difficulties measuring and attributing the emissions. “What we’re finding out is that you can have somebody trawling in the North Sea and it becomes CO2 in the water and it will move with the currents and it may not become a CO2 emission in the atmosphere until it gets to maybe the coast of Morocco.”

Despite this, she was confident they would be included in nations’ greenhouse gas inventories. “Just because the science is hard, doesn’t mean we shouldn’t do it,” she said.

Potentially, measuring those emissions could lead to monetising them.

Atwood said that several countries, particularly those with large coastlines, are “really interested” in raising funds through carbon credits to protect the seas or to compensate fishing communities.

“Some of the people that are working on Argentina’s [national climate plan] were really interested when they got this study,” she said. “If you have a country which has a lot of trawling going on, there might be another country which can basically pay to stop that trawling.”

Carbon reductions used to create offsets are supposed to be permanent but Dufrasne asked: “Even if a country banned [bottom-trawling] and enforced the policy, how credible is it that this will be maintained for 100+ years?”

On top of this, he said bottom-trawling companies or their governments could buy carbon credits from a government which banned the practice in one area while continuing to trawl in other regions. They could then use the credits from one region to “compensate” the damages in the other region.

He said: “It could end up being the seafood version of the carbon-neutral LNG deals that are unfortunately so popular right now: you sell a harmful product while supporting its alternatives with carbon credits and make it all look very nice by selling everything together.”

The study says the world’s governments should work together to create protected areas where bottom-trawling is not allowed. Currently, Utah State University estimates that just 2.7% of the ocean is fully protected.

Atwood said that protecting these areas would displace bottom-trawling to areas with less sediment carbon, resulting in a reduction of emissions.

These protected areas should be where bottom-trawling is common and there’s lots of carbon. As examples, she gave the South China Sea, Europe’s North Sea, the US Aleutian islands and Oregon coast and the west and south-west coast of Africa, where trawling is carried out by local, European and Chinese-owned fishing fleets. 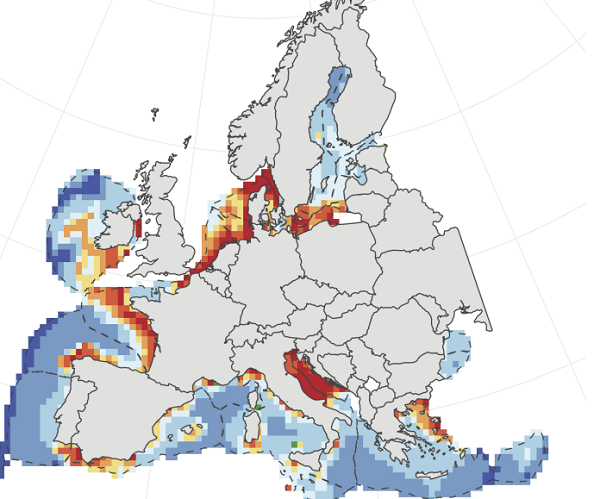 The study’s authors have marked the EU’s priority protection areas in red. Norway and UK not included. (Photo: Enric Sala et all)

Another way to reduce bottom-trawling is to reduce fishery subsidies. The study’s lead author Enric Sala told Climate Home in an email: “Eliminating subsidies hopefully would reduce the number of bottom trawlers out there, because in many places bottom trawling wouldn’t be profitable without government subsidies.”

The World Trade Organisation’s members have been negotiating the reduction of these subsidies since 2001. The organisation’s new head Ngozi Okonjo-Iweala is trying to conclude these talks, recently posing next to an ice fish sculpture with the words “stop funding overfishing” engraved on it.

At the moment, Atwood said, it is not possible to bottom trawl ethically. In the Netherlands, a method called pulse trawling is being trialled where an electric pulse causes fish to swim up into the net, which is above the seabed.

While this would disturb less carbon, it has been banned by the European Union. There are fears it could damage species like sharks, which are particularly sensitive to electrical currents.

A more ethical way to harvest certain species like oysters, mussels and clams, Atwood said, is to farm them. “There’s been a lot of bad press about some ways of doing aquaculture [fish farming] but they’re actually a really clean marine species to grow,” she said.

When asked if reducing fish and seafood consumption would help, Atwood said that fish is a healthy meat option and is important for food security, particularly in the developing world.

As well as bottom trawling, the report’s authors said they were concerned about the “emerging threat” of deep sea mining for minerals, which disturbs the sea bed in a similar way.