Just 18% of recovery spending globally is green, a UN report found. Despite pledges to ‘build back better’, governments have propped up fossil fuels, aviation and roads 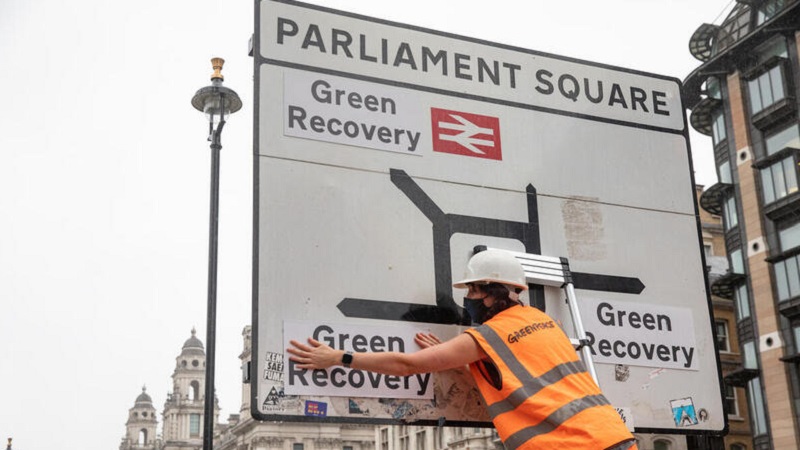 The world’s governments are failing to “build back better” from the Covid-19 economic slump, the UN Environment Programme warned in a report published on Thursday.

Its analysts classified just 18% ($341 billion) of national recovery spending pledges as green. Including European Commission spending brings the figure up to $697bn.

Oxford University environmental economics professor Cameron Hepburn said the report “made sure that countries can be compared and frankly shamed if necessary… we need to call out countries which aren’t doing what they need to be doing in their own best interests”.

The report authors accepted that “some dirty rescue-type expenditure may have been necessary to ensure that lives and livelihoods were saved” – but said these bailouts should have had green strings attached.

The report is critical of a lack of spending on re-training, at a time many people were laid off from sectors like oil and gas. This was minimal and “almost exclusively” non-green. Joy Kim from the UN Environment Programme said this was “short-sighted”. 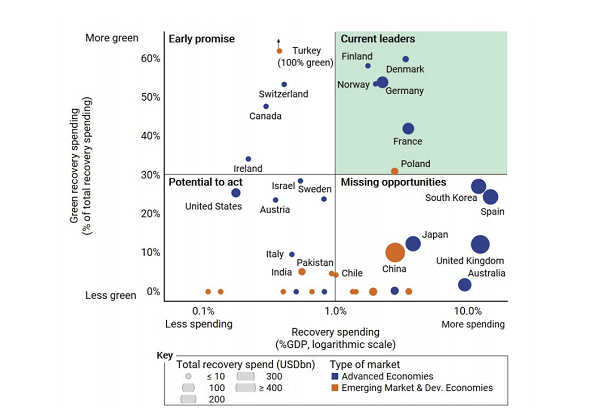 Oxford University’s Smith School of Enterprise and the Environment helped produce the report. Its Global Recovery Observatory has a database of countries’ spending commitments since the pandemic started.

On this basis, the academics calculated how much of each countries’ recovery spending was green.

It classified six countries as the ‘current leaders’: Finland, Norway, Denmark, Germany, France and Poland. O’Callaghan these leaders were “a fantastic example to the rest of the world”.

The last was a surprise entry from Europe’s most coal-reliant country, driven by a Z2bn ($0.5bn) package of support for electrifying school buses, taxis, vans and electric cars and putting up rooftop solar panels and a Z1.9bn ($0.5bn) Clean Air 2.0 programme to replace boilers and improve insulation. On the other hand, Poland bailed out a coal company, created a hard coal reserve, supported airports and pledged Z3.8bn ($1bn) to new roads.

“For emerging and developing economies, in some ways this isn’t about building back better, it’s about building”, said author Brian O’Callaghan, from Oxford University’s economic recovery project.

Here’s a rundown of the countries that scored poorly, despite sizeable stimulus packages.

The Cop26 hosts were the third biggest spenders as a proportion of GDP but only around one pound in ten was green. Much of the money went on measures to support peoples’ jobs, like a furlough scheme through which the government paid 80% of peoples’ wages.

Around £5bn ($7bn) went towards climate adaptation, specifically protecting 336,000 properties from the rising threat of flooding.

Australia successfully contained the coronavirus through stringent lockdowns and has tried to sustain its economy through generous recovery spending of around a tenth of its GDP. Unfortunately, hardly any of this was green.

There was 2tn yen ($18bn) for green projects like hydrogen and storage batteries and 0.1tn yen ($0.9bn) for a scheme rewarding eco-home builders. According to the report, Japan would have benefitted from public support for electric vehicle sales, given its large automotive industry.

In the report’s list of big spenders as a proportion of GDP, the Netherlands is tenth. Much of that was in the form of tax cuts for corporations and individuals. Near to none of it was green spending.

The state lent the French-Dutch KLM Royal Dutch Airlines €1bn ($1.2bn) and guaranteed bank loans of up to €2.4bn ($2.9bn). This support was conditional on a commitment to reducing evening flights by a fifth and reducing emissions per passenger 50% by 2030 compared to 2005.

Portugal spent just under one euro in a hundred on the recovery, handing cash to the embattled tourism sector and deferring VAT payments. Near to none of this spending was green. Supported by the European Commission, Portugal bailed out TAP Air Portugal without any green conditions and it gave a €133m ($158m) restructuring lone to Azores airlines SATA too.

Mexico spent over 1% of its GDP on the recovery and next to nothing on green measures.

Despite global increase in oil costs, the government announced it would not increase gasoline prices. This handed 65bn pesos (US$3bn) to state-owned fossil fuel company Pemex. In this context, the government also announced a 339bn ($16bn) pesos investment in the energy sector. There was support for Santa Lucia airport and oil refineries.

On the other hand, Mexico City got some funding for 54km of new cycle paths.

As a percentage of GDP, The Philippines spent more on its recovery than many more developed nations like the USA, Italy and Sweden.

The biggest chunk of this spending was P1500bn ($30bn) on a three-year infrastructure building spree. The “build, build, build” programme covered healthcare, education and food security but not renewable energy or adaptation to the extreme weather that frequently batters the Pacific nation.

China had the biggest recovery package of any developing country. Around a tenth of the spending was green.

It extended tax exemptions on electric vehicles, funded anti-pollution measures and increased the budget for renewable energy subsidies. But it was generally a polluting recovery led by heavy industries like steel, cement and aluminium. The government supported coal mines in Wuju, Pinliang and Xinjiang and subsidised air freight and airports, rewarding flights which kept running through the pandemic.

The US has the smallest recovery package of any advanced economy, as a proportion of total GDP. Around a quarter is green.

The Trump administration gave out $2bn in grants to airports, $120m to coal “innovation centers” and spent $33m repairing methane gas pipelines. On the other hand it provided $100m in grants for renewable fuel research, extended the deadline for solar and wind tax credits and signed the Great American Outdoors Act, which established national parks.