France and Spain are calling for the EU to quit the Energy Charter Treaty unless it is overhauled to support climate goals; eastern member states want less radical reform 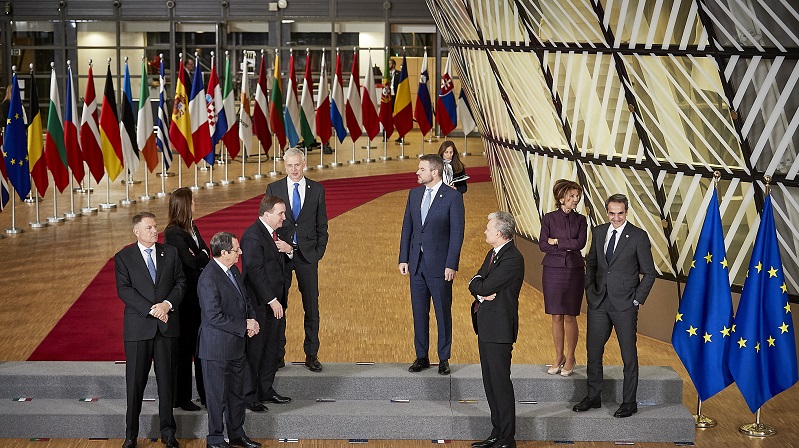 EU leaders at a Council meeting in 2019. (Photo: European Union)

The European Union has renewed its push for greening a major international treaty protecting energy investments, after last-minute wrangling and divisions between member states.

The treaty allows fossil fuel companies to sue nations when climate policies affect their profits. Recently, German utility RWE filed a suit against the Dutch government for €1.4 billion in damages over coal phaseout plans that hit the value of a plant the company built in 2015.

Similar cases could cost taxpayers across the world up to €1.3 trillion ($1.5tn) by 2050, according to the Open Exp think tank, based on the value of fossil fuel assets protected by the treaty. Just under half of these costs would fall on the EU.

Campaigners and some member states have called on the EU to leave the treaty – a matter complicated by a clause meaning the ECT’s rules apply for 20 years after leaving.

“The ECT leaves us in a dead end street and the only good option is therefore to leave the ECT,” Paul de Clerck, from Friends of the Earth Europe, told Climate Home News.

The European Commission has been pushing for reform of the ECT at modernisation talks which began in July 2020. Any amendment to the treaty would have to be agreed unanimously between its 53 signatories.

Leaked ECT notes previously seen by Climate Home show the EU’s proposals for reform have so far been blocked by Japan and Kazakhstan, which argue “modernisation should be mininimal”. Japan’s position as the largest single donor to the ECT and the vice chair of the modernisation negotiations means it is influential.

Monday was the deadline for parties to the ECT to send proposed text ahead of the third round of negotiations on 2-5 March. The EU proposal was submitted shortly before midnight.

The document proposes to protect existing fossil fuel infrastructure for ten years after the amendment comes into force. New power generation would be protected during that period if it emitted less than 380g of CO2 per kWh, covering efficient gas-fired plants as well as renewables.

That is strengthened from an earlier draft EU position seen by Climate Home, which set the emissions intensity threshold at 550g of CO2. But it remains far above levels considered by the EU in its own draft taxonomy, which would only label as “sustainable” gas power plants that emit less than 100g of CO2 per kWh – requiring carbon capture and storage.

The EU also seeks to extend protection to hydrogen, biomass and biogas investments.

Hydrogen can be made from fossil fuels or clean electricity. The EU’s proposal protects renewable and “low-carbon” hydrogen which it defines as either fossil-based hydrogen with carbon capture technology or electricity-based hydrogen “with significantly reduced full life-cycle greenhouse gas emissions”.

Cornelia Maarfield, climate and trade manager at Climate Action Network Europe, said hydrogen and biomass should not be included as they are not necessarily green.

“Why set a new trap for policy makers if you haven’t found the way out of the existing one?” she told Climate Home.

A European Commission spokesperson told Climate Home that modernisation negotiations were still “at an early stage”. Campaigners argue the reform process is hopeless and member states should leave the treaty.

Maarfield said: “It is now crystal clear that even after the reform, the ECT will remain an obstacle to climate and sustainable energy policies.”

“European countries must shift from modernisation to complete withdrawal from the outdated ECT. If they pull out jointly, they can cancel the sunset clause, which allows investors to sue for another 20 years after withdrawal, by excluding investor-state disputes amongst themselves.”

Yamina Saheb, who used to head the ECT energy efficiency unit and now monitors negotiations, said just 20% of energy investments in the EU or the European Free Trade Association are from outside of its borders. So, by leaving together, EU nations could avoid most legal cases.

Saheb told Climate Home that while the EU’s proposal wasn’t ambitious enough, it still wouldn’t be accepted by other ECT parties. It is now time for countries like France, Spain and Luxembourg, which have threatened to leave the ECT, “to take action,” she said.

Spanish energy and environment minister Teresa Ribera tweeted on Saturday: “Full alignment with the Paris Agreement [on climate change] or withdrawal from the treaty.”

French ministers have told the European Commission that the “option of a coordinated withdrawal of the EU and its member states should be raised publicly from now on”.

Luxembourg’s energy ministry told Climate Home News that, while minister Claude Turmes supported the EU’s attempts to modernise the treaty, “he also recalls the urgency to find a swift agreement on this issue since climate is an emergency and as such 2030 and 2050 objectives cannot be slowed down. March is our last chance for a deal.”

On the other hand, a Slovak official in Brussels told Politico on Sunday: “We support the Commission’s current proposal” but “we are not supportive of any stricter criteria on deadlines or thresholds” that would undermine investments in gas infrastructure.

The ECT was set up in the 1990s after the collapse of the Soviet Union to encourage global investments in energy. Italy and Russia have since left the ECT although they are still subject to its sunset clause.