More than 200 people are dead or missing after floods gushed through mountain gorges in Uttarakhand, India, in a disaster linked to climate change 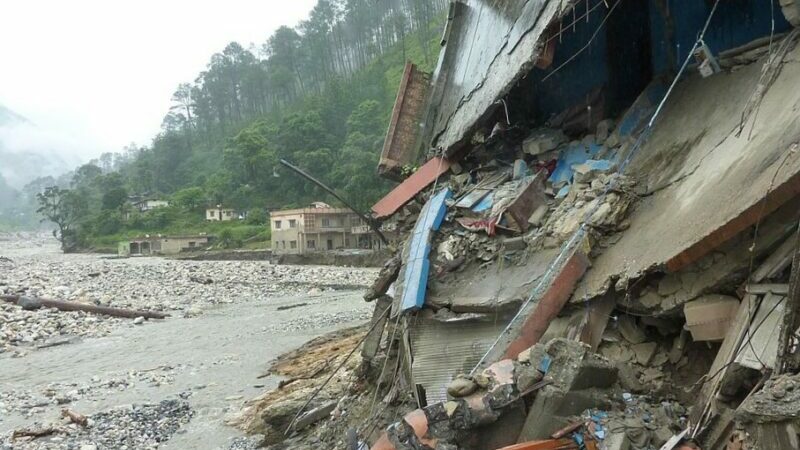 At least 31 people have died and 175 are missing after a flash flood in the mountainous state of Uttarakhand in India, once again bringing into spotlight the destabilising impacts of global warming on the Himalayas.

Rock, ice, debris and water flowing at high speeds swept away hydroelectric projects and people in its path on Sunday, before it mellowed around 100 kilometres downstream.

Mujeem Khan, a daily wage labourer earning 500 rupees a day ($7), was working near a tunnel at the Tapovan hydropower project, where 150 of his colleagues got trapped. He says he survived narrowly. “Luckily, I was a little higher up the slope when the flood hit,” he told Climate Home News.

Khan heard what sounded like a massive blast, turned around and saw water and debris dragging away members of his extended family. “My brother and other relatives were working right where the flood hit. I saw them being washed away into the tunnel.” He had little hope of their being found alive.

As of 12 noon local time Tuesday, the Uttarakhand state government reported that 31 dead bodies had been recovered, of whom 29 had been identified. More than 48 hours after the incident, 175 people were unaccounted for.

While scientists and experts are still working to pinpoint what triggered the flood, the working hypothesis is that due to a rock slide, a large chunk of glacier broke at an altitude over 5,500 metres above sea level.

The ice and rock fell into a glacial lake, causing the banks to burst and water to gush down the steep and narrow gorges of the upper Himalayas. The number and area of glacial lakes has increased in the mountain range due to climate change.

Floodwaters smashed into the Rishi Ganga hydroelectric project at around 3,700 metres above sea level and washed it away entirely. According to the chief minister of Uttarakhand Trivendra Rawat, at least 35 people working at the project are missing. Concrete and debris from the Rishi Ganga project were then carried downstream and smashed into the under-construction 520MW Tapovan Vishnugad hydropower project, causing massive damage.

The disaster was made more likely by climate change, according to Mohammed Farooq Azam, an assistant professor of glaciology and hydrology at the Indian Institute of Technology in Indore. “Yes, warming temperatures are making events like avalanches, ice fall and landslides more frequent. Erratic weather patterns like increased snowfall and rainfall play a role as do warmer winters,” Azam said.

Avalanches are rare in February in the upper reaches of the Himalayas as the snow and ice remain frozen due to low temperatures. This year, however, has been warmer than normal and in January Uttarakhand – and the rest of India – saw its highest average temperature in 60 years.

AP Dimri, a professor at the School of Environmental Science at the Jawaharlal Nehru University in Delhi, said the higher reaches of the Himalayas are warming faster than the global average which has led to rapid melting of glaciers. That has, in turn, caused the formation of a large number of glacial lakes. “These lakes also become reservoirs of ice and moraine debris. With an increase in this phenomenon, the breach of glacier lakes poses a severe threat to communities living downstream,” Dimri, who is from Uttarakhand, said.

The damage was aggravated by debris from development projects including the hydropower dams and highways being carried downstream.

In 2013, the calamitous combination of climate change and haphazard development in Uttarakhand led to the deaths of over 6,000 people in flash floods caused by heavy rainfall during the Indian monsoon.

Experts such as Ravi Chopra, director of the People’s Science Institute in Uttarakhand, had been warning about the risk of such development projects even before 2013. “But the government doesn’t listen when it doesn’t suit them… when we say that project should not be built or that the size should be reduced,” Chopra said.

Chopra argued that the government should pay heed to the views of experts and fix responsibility for this disaster. “Companies and officers who are found to be at fault should be personally held responsible and punished. Only then can we hope for some change,” he said.

Kabir Agarwal is an independent journalist from India who writes on climate change, business and the economy. He has contributed to the Times of India, Caravan magazine, Al Jazeera and most recently worked as a national reporter at The Wire – India’s leading independent news website. In 2018, he was awarded the Red Ink Award for excellence in journalism.

This article was amended to reflect analysis showing that a rock slide, not an avalanche, was the likely trigger of the disaster.