5 ways climate issues played out in the US election

Most Americans see climate change as a serious threat, fracking did not swing the vote in key states but climate-vulnerable Florida went to Trump despite his denialism 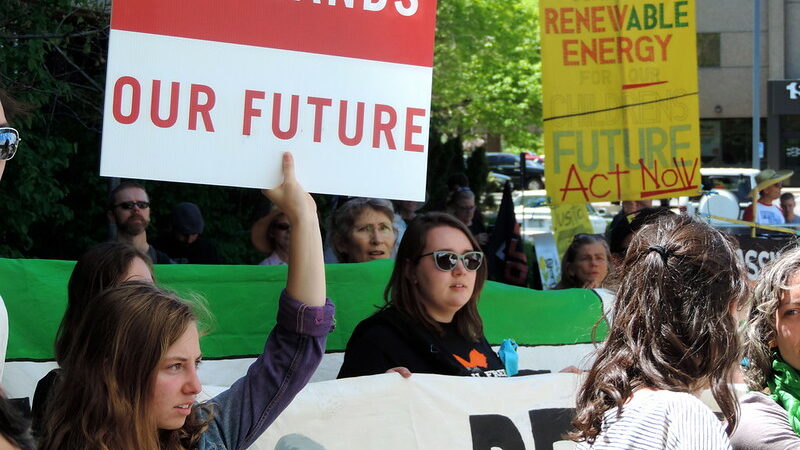 Climate was a major issue for voters in the 2020 US election (Pic: WildEarth Guardians/Flickr)

As the White House race enters the final stretch, victory is within reach for Joe Biden – raising hopes of renewed US engagement with the climate crisis after four years of denial under President Donald Trump.

For the first time in history, climate was very much on the ballot in this election. Voters faced a choice between climate inaction or a $2 trillion green revolution.

From a focus on clean energy in the presidential debates to the outcome of key senate races, here are five takeaways on the climate.

60% of Americans now view climate change as a major threat to the wellbeing of the United States, compared to 44% in 2009. The rise in concern is mainly among Democrats. In a survey in August, 68% of Biden supporters said climate was very important to their vote, compared to just 11% of Trump voters. Exit polls showed that two-thirds of voters see climate change as a serious problem.

Biden’s climate plan, the most ambitious ever presented by a presidential candidate, pledged to deliver net zero emissions by 2050 and 100% clean electricity by 2035; while Trump promised voters that the US would “remain the number one producer of oil and natural gas on earth.”

Trump’s focus on defending jobs in the coal, oil and gas sectors does not represent the views of most Americans. According to a survey by Politico, 69% of registered American voters – 83% of Democrats and 55% of Republicans – support the US transitioning away from fossil fuels to renewables.

In both blue and red states the green transition is already well underway, Rachel Kyte, dean of the Fletcher School at Tufts University and former adviser to the UN secretary general on sustainable energy, told Climate Home News. “The genie is out of the bottle in red [Republican] states, even with a Trump administration.”

Texas, the heartland of US oil and gas, has the largest onshore wind market in the country, with over 27 GW of capacity and a further 7.5 GW in the pipeline, according to Kyte. Florida installed more solar capacity in the first quarter of this year than California, the leading state for renewables, and plans to increase its capacity with a further 7.4 GW over the next five years, she added.

In a poll by the Environmental Defense Fund, 77% of Colorado voters said they were more concerned about climate change because of the wildfires. Two-thirds of voters said they would more likely vote for a senate candidate who supported aggressive action to tackle climate change. “Hickenlooper clearly benefited from that,” said Henn.

“With an economy and way of life so dependent on our vast natural resources and outdoor recreation industry, Colorado voters are looking for leaders who will take this issue seriously and push for bold climate action at the federal level,” Amy Gray, campaigner at 350.org, told Climate Home.

In Florida, the US state most at risk of coastal flooding, voters highlighted serious concern for climate change in the run-up to the election. In a poll by the New York Times, 54% said they were either “very worried” or “somewhat worried” that rising sea levels caused by global warming would significantly impact their lives.

Despite the state’s vulnerability to climate change, the majority of Floridians voted for Trump on Wednesday. “Public polling showed that climate was a vulnerability for Donald Trump. This is true especially in Florida, where voters very much care about climate – but Florida is a big, complicated state and ultimately other issues came to the forefront,” Blatt said.

Democratic-leaning Miami-Dade went to Trump, as voters from Venezuelan and Cuban backgrounds responded to the president’s portrayal of Biden as a radical socialist.

The high number of Trump votes were linked to “the socialist scare label attached to Biden, of which the Green New Deal was a part,” said Kyte. Trump’s anti-socialist rhetoric “worked for people who escaped leftist populism and communism to arrive in Miami,” she added.

5. Fracking did not swing the vote in key states

Fracking was a contentious issue in the election. Trump vehemently supports fracking, considering it a critical technology in his defence of jobs in the oil and gas industry. In the run-up to the election, Trump accused Biden of being anti-fracking and declared that a Democratic victory would be “economic death sentence for Pennsylvania.”

Biden’s climate plan includes a proposal to end new oil and gas development on federal land, but he has repeatedly stated that he will not ban fracking.

.@JoeBiden will not ban fracking. That is a fact.

Despite Trump’s attack line, Biden won swing states which support thousands of fracking jobs. On Wednesday, he won Colorado and New Mexico, and was projected to overtake Trump’s lead in Pennsylvania as hundreds of thousands of postal votes were counted.

“The majority of Pennsylvanians oppose fracking. People support clean energy and want politicians who are willing to stand up to big oil,” Henn said. According to a survey by Climate Power 2020, 73% of Pennsylvanian voters support plans for the US to transition to a clean energy economy by 2050 and only 32% support the fracking industry.