A food swapping scheme led by indigenous women in Costa Rica is combining traditional customs and modern technology to beat hunger in the face of the coronavirus pandemic.

The programme, launched with its first money-free food exchange in June, aims to tackle the impacts of Covid-19 on food security in the mountainous Cabécar Talamanca indigenous territory.

Organisers hope in the longer term it will boost the community’s resilience against the threats of climate change and encroaching industrial farming.

“Our younger generation is losing these practices and now is a good time to take them up again,” says Gina Haylen Sanchez, a member of the women’s association leading the project. “Now that we are faced with this situation, we have to bring out what we really are saying that we are as indigenous people.” 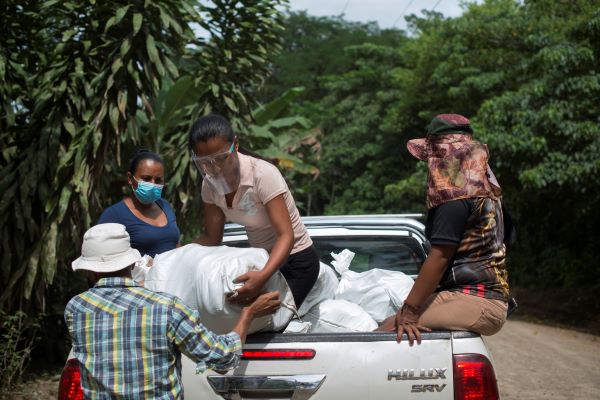 The exchange revolves around “tejedoras”, or “knowledge weavers”: women from ten communities inside the territory who collect information about the food needed by families in their area, and what they have to spare.

These details are sent by WhatsApp to a central office of the association, which works out the exchange, or “estanco”. Produce is harvested and collected together in white plastic sacks outside people’s houses, where the women collect it, bring it to their central office, unload everything and sort it into delivery packages.

“We saw that at some point this pandemic is going to affect us economically,” says Edith Villanueva Reyes, secretary of the board of directors of the Association for the Integral Development of the Talamanca Cabécar Indigenous Territory (Aditica). Instead of looking outside the territory for support, the woman decided to focus on working together, she says.

The use of WhatsApp to collect the information fits in with a wider trend in Costa Rica – the social media platform has been used extensively during the pandemic by producers and small businesses to connect and deliver directly to customers.

And the initiative builds on the agroforestry techniques of the Cabécar, whereby crops are planted among native trees and plants, without the need to raze forests for farmland. 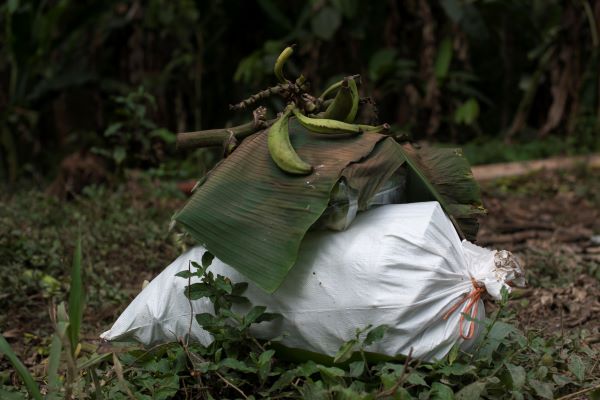 White bags were delivered to each family that supported the initiative, to easily identify the donation

The process is a modern, scaled-up version of the Cabécar’s traditional custom of exchanging food. “You always brought something to the person you were going to visit, and you gave something back to the person who visited you,” says Levi Sucre Romero, an indigenous Costa Rican from the neighbouring Bribrí de Talamanca territory and a coordinator of the recovery plan in Talamanca Cabécar. “This was common within the territory and was very strong before, but is less so now.”

Each part of Cabécar has a different balance of food production, Haylen Sanchez Rayes, another member of the Kábata Könana association, explains as she takes a break from unpacking the white plastic sacks, each inscribed with the name of the family that contributed it and sometimes a friendly message to the recipient.

In the lower region, varieties of plantain and banana are grown along with cassava, cacao and avocado, she says, while higher up rice, different varieties of beans and maize are more common. 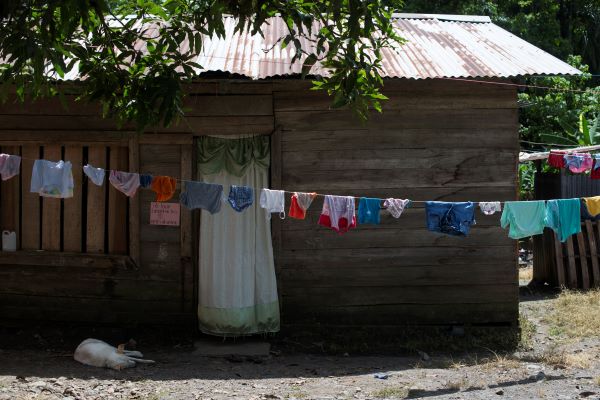 Shiroles village in the Talamanca mountains of Costa Rica

Taking due health precautions, I visit the women in their central office the day they are collecting food. Costa Rica has seen a surge in Covid-19 infections since June, after initial success in containing the virus. At time of publication, there were around a thousand new confirmed cases a day. The women – and some men who are helping out – wear masks or visors as they work to prevent contagion. To enter the territory I have to provide a form showing I have permission, keep a mask on and wave a bottle of hand sanitiser at the gatekeeper.

This forms part of a wider pandemic care and recovery plan for the Talamanca Cabécar territory, which has included disseminating information about the pandemic in the indigenous language and restricting access to the territory. 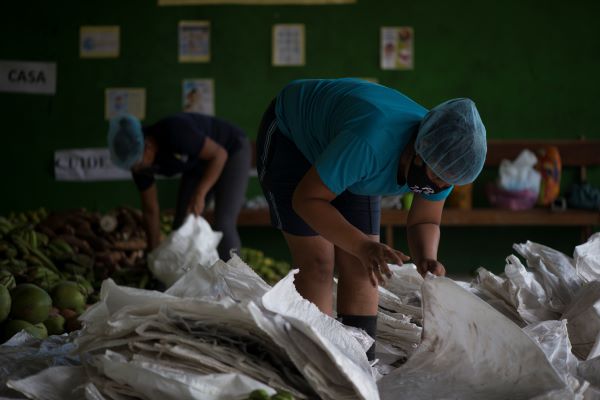 The second estanco taking place when I visit in late August is different from the first. The food is being distributed not among the indigenous community, but in the capital San José, through a network of footballers in the First Women’s Division of Costa Rica. Several of these players come from the Talamanca Cabécar community, including Yoanka Villanueva, Edith Villanueva Reyes’s daughter.

Organisers got more than 300 indigenous families to donate crops. They collected 337 sacks of fruit and vegetables, weighing in excess of 10 tonnes, including cassava, banana, plantain, coconut, peach palm, sugar cane, avocado, rambutan, oranges, lime, breadfruit, Columbian zapote and peppers. Many are different varieties than you would find in a supermarket.

The women have previously received support from the capital after natural disasters such as floods. In return, they want to show solidarity with those struggling in the city during the pandemic. “We can walk onto our patios for a banana, cassava, a hen or eggs,” says Marisela Fernández Fernández, president of the Kábata Könana Women’s Association. “But in the city people do not have that same luck.” 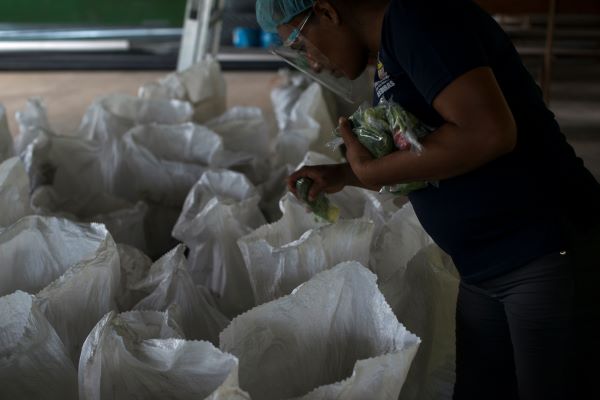 The two exchanges are both examples of a “solidarity economy”, says Bernard Aguilar, executive director of environmental NGO Fundación Neotrópica, which is not valued by conventional metrics. “Nothing that is going to be transacted in the estanco project is going to appear in the GDP,” he notes.

A third exchange, which will again distribute food within the community, is set to take place in a few weeks time.

Ultimately, the women want to expand the exchange to include other indigenous territories, including poorer areas such as Alto Telire. This extremely remote Cabécar community in the neighbouring Telire territory is difficult to access.

“We have thought of carrying out initiatives there, but we have to set goals to see how we can get in, how we can go and talk to these families,” says Sanchez Rayes.

The women also hope to begin connecting online with people outside the territories to sell produce directly to them. Larger wholesale buyers have cut their orders since the pandemic began. 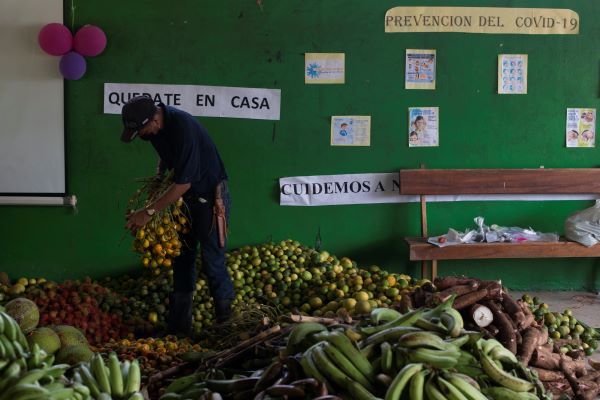 The Talamanca region is already seeing some impacts of climate change. Several people I speak to highlight a fall in the production of pejibaye – a dry, savoury fruit from the native peach palm trees popular throughout Costa Rica.

“I remember that my mother had so many pejibayes that she threw them to the pigs,” Villanueva Reyes tells me. “But from around five years ago, the pejibaye harvests have not occurred. People say it’s because an insect eats them there before they bloom. We don’t know […] but the harvest of pejibayes is no longer the same as before.”

The Talamanca forest mountain range is highly vulnerable to climate change. Already high yearly rainfall could rise by 30% by the end of the century, according to a 2016 report by Costa Rica’s Tropical Agronomic Research and Teaching Center (CATIE). Temperatures are forecast to rise at least 3.5C from pre-industrial levels. 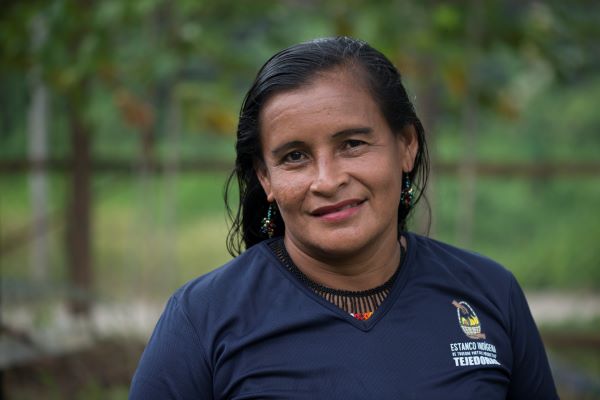 Fernández Fernández says the community has already been seeing changes in the local climate, with rain and sunny weather coming at unexpected times of year and impacting harvests.

Practices such as the estanco could help to face these climate impacts, she says. “Our elders always say we must work, that we should not sow monoculture,” she adds, referring to the huge banana plantations in Costa Rica, which use vast amounts of pesticides. “We have to plant varieties of products to guarantee food, because we do not know when the time of drought, the time of hunger, the time of crisis could occur.”

The pandemic has hit Costa Rica hard, but these women are seeing a way to use this experience to create more resilience in the long term. “By practicing our own culture, as our ancestors taught us, we can continue living and we can face the pandemic,” says Villanueva Reyes.

Photos by Jose Díaz. This article is part of a climate justice reporting programme supported by the Climate Justice Resilience Fund. You can find our policy on reporting grants here.