A message to readers from outgoing editor-in-chief Karl Mathiesen, as he moves on to a new opportunity 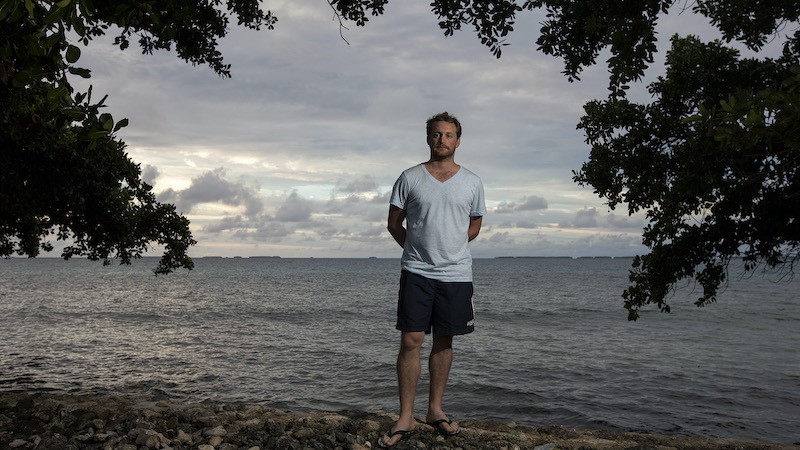 Karl Mathiesen, waiting to interview Marshallese poet Kathy Jetnil-Kijiner on the seawall behind the home of Hilda Heine, her mother and the future Marshall Islands president (Photo: Rémi Chauvin)

Megan Darby, who has been doing a fantastic job as acting editor, will continue in that role. CHN will soon be advertising for a new permanent editor.

We need reporting that reflects the true shape of climate change. That’s why there are few more urgent and necessary journalistic projects than CHN.

Carbon is borderless. But news is not. Even as the media detaches itself from the physical world of newspapers and plug-in TV cables, most outlets remain bound to audiences defined by location or nation.

Carbon’s impacts, and the changes wrought by the transition to a zero emissions world, are universal. But climate desks in general remain specialised and variably resourced. Meanwhile, on the flagship economics and politics desks, many reporters carry on as though the planet were not growing hotter.

CHN’s audience understand that climate change demands better than this. They understand their actions, and the actions carried out in their names, have consequences for families and communities around the world. They know decisions taken in far-off centres of power will define the future for all. They want climate literacy to be a basic requirement for journalists on every beat. They read CHN because politics is as important as physics in understanding why the world is becoming less hospitable.

We’ve spent the last three years building a news service that mirrors the reality of climate change. That means scrapping old biases about which stories are relevant, investing resources in journalists around the world and viewing climate through the lenses of politics, law, economics, culture, history and beyond. It’s an unfinished project, but an ambitious and exciting one.

For me, there’s a new challenge ahead, one that throws me back into reporting. For news on that, you can follow me on Twitter at @karlmathiesen.

Finally, there are many people to thank, too many for here. But I’d like to single out my enormously talented and dedicated colleagues who give so much care and effort to this service.

And to you, dear reader. It’s been a great pleasure and privilege, these past few years, to bring you news from around the world. Please keep reading, sharing, sponsoring and supporting this site. We are going to need it.