In a makeshift cotton face mask and long green dress, Anna Mbalula, 67, waters vegetables in a garden in Rumwanjiva with about 15 other women in Mwenezi district in Masvingo province.

Millions of Zimbabweans are going hungry, hit by a triple whammy of climate change, poor governance and the coronavirus pandemic.

Yet in the face of starvation, Mbalula and her community have a reliable source of food, thanks to a plan made among 200 women six years ago.

“We decided to build ourselves a dam. When the place had been identified, we cleared the area, contributed money and bought four bags of cement to build a small tank to store water for building,” Mbalula tells Climate Home News. “We carried boulders and did most of the work needed to build the dam.”

That was in 2014. As luck would have it, the United States Agency for International Development (USAID), got wind of the initiative through the Mwenezi Development Trust and partnered the village women through provision of funding.

The works lasted for more than six months, Sekai Mubatagore, a 42-year old housewife remembers. “It was hard work but we persevered because we wanted the dam,” she says.

While more than 60% of Zimbabwe’s 14 million population live in a household that is unable to obtain enough food to meet basic needs, these women are keeping their heads above water.

The UN’s World Food Programme (WFP) forecasts that among the rural population, 5.3 million people will be food-insecure by the end of 2020, with between 3 and 3.3 million in a “crisis” situation. The coronavirus crisis has made things worse particularly for city-dwellers, disrupting supply chains and livelihoods.

“The situation is more challenging than ever,” said WFP Zimbabwe representative Niels Balzer.

WFP has raised $111 million towards its emergency food assistance response and needs an additional $230 million to meet the food and nutrition needs of the most vulnerable families in Zimbabwe until the end of the year. 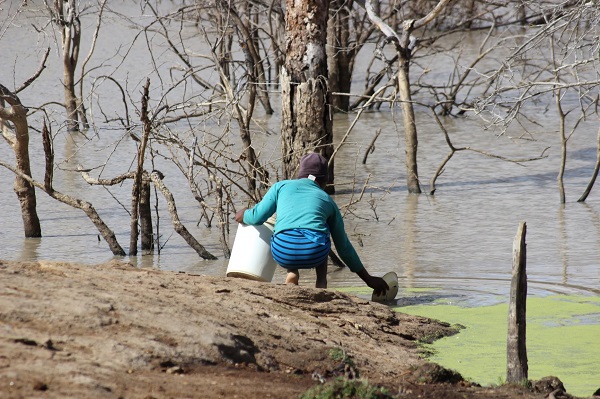 In addition to severe droughts that affected the 2018/2019 agricultural season, Zimbabwe was hit by Tropical Cyclone Idai, which left a trail of destruction in the greater part of the Eastern Highlands and some areas in the southern part of the country.

“Because of climate change, weather patterns have become too erratic. We are now having multiple droughts as compared to the droughts we use to have. Now we are having three seasons of consecutive droughts and that never used to happen. When it does, it makes it very difficult to recover,” says Rukuni.

Those with no access to water for irrigation in the province are bearing the full brunt of hunger.

The peasant community, which produces 70% of staple foods (maize, millet and groundnuts), is particularly vulnerable. Rural Zimbabweans have access to less than 5% of irrigation facilities and are struggling to access productive resources due to cash shortages.

Along the Beitbridge Road highway, some 50 km from Neshuro Business Centre, two women kneel on the edges of the road to pick maize grains dropped by haulage trucks plying the route.

“Its because of the hunger,” a woman who identifies herself as Mai Prisca explains to Climate Home News. From the handful of grains, she hopes to feed her four kids.

“The maize is not a lot but I can crush it and make samp for the children,” she says. 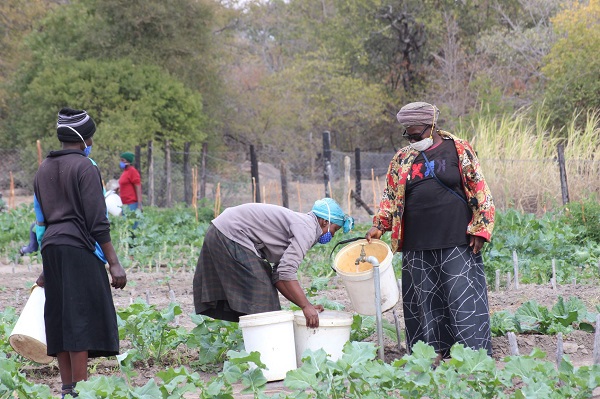 Once the breadbasket of Africa, Zimbabwe has become reliant on imports and food aid to stave off hunger for more than a decade. This chronic problem cannot all be blamed on climate change.

The country’s agricultural misfortunes have their roots in poor economic policies and the abortive land reform exercise of 2000, spearheaded by veterans of the war of liberation that ended when Britain granted independence in 1980.

In a bid to address the legacy of British colonialism, under which white farmers held most of the productive land, the country’s late leader Robert Mugabe forcibly seized farms for redistribution to landless black Zimbabweans. A total of 3,500 white farmers were dispossessed.

However the new owners lacked the access to finance, labour and technical knowledge to run their farms productively, says Godwell Nhamo, a professor at the University of South Africa. Crop harvests plunged to dismal levels.

“One would note that in pre-independence Zimbabwe, there was good supply of labour thanks to migration from countries such as Malawi. Now, there isn’t any farm labour in the country,” says Nhamo.

Efforts to lift production through the government’s “command agriculture” exercise have yielded next to nothing. One of President Emmerson Mnangagwa’s allies is under investigation for corruption, after $3 billion to finance the policy disappeared with no records to show how it was spent.

Following a visit to Zimbabwe in November 2019, UN special rapporteur on the right to food Hilal Elver emphasised the importance of improving governance.

“The people of Zimbabwe are slowly getting to a point of suffering a man-made starvation,” she said in her report.

“With its large reserves of gold, platinum, diamonds and other metals and minerals, as well as fertile agricultural lands the country still has an enormous economic potential, which could lift the entire region.

“Good fiscal and economic governance could change the course of Zimbabweans’ economic and social conditions, particularly their right to food.”

Nhamo said investment in dams and a shift to short-season crop varieties or animal husbandry can help to mitigate the impacts of climate change on food production.

Back in Mwenezi, women say the dam has transformed their lives.

“Before the dam, we were fetching water a great distance away. Our livestock also got water more than 7 km from here,” Mbalula says.

“We could not even mould bricks to build houses,” Sekai Mubatagore, 42, says. “We have managed to build a school here for our children.”