Electric car sales worldwide are suffering less from the Covid-19 crisis than petrol and diesel rivals, in sign of hope for a shift to cleaner transport 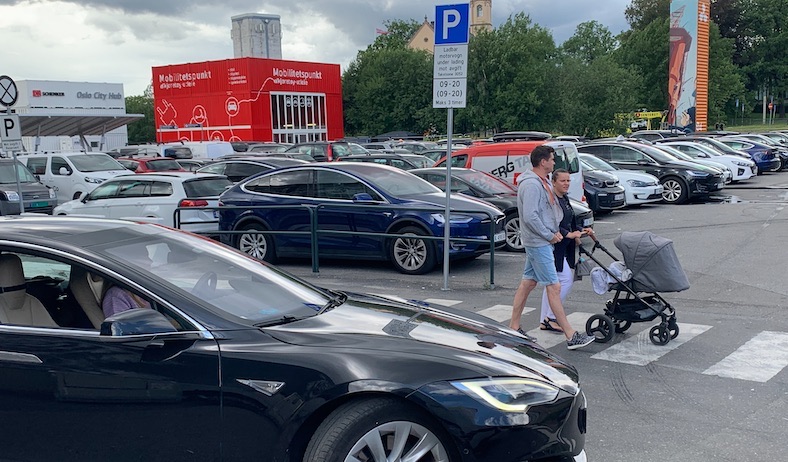 Pure electric cars made up almost half of car sales in Norway in the first half of 2020, in a world record as battery-powered vehicles suffer less than fossil-fueled rivals in the economic downturn caused by Covid-19.

Worldwide, car sales have plunged in 2020 but government measures to promote a greening of the auto industry in nations from China to France have made electric cars a relative bright spot in the market.

Shares in US electric car marker Tesla shares hit a record high on Wednesday at $1,333 and it overtook Toyota as the world’s most valuable carmaker.

In Norway, the global electric car leader thanks to huge tax breaks, low road tolls and free parking, sales of battery electric cars edged up to 48% of all new car registrations from January to the end of June, from 45% in the same period of 2019 and 42% in all of 2019.

Data from the independent Norwegian Road Federation showed it was the best percentage share for battery electric vehicles in a half-year even though total sales were hit by lockdowns to slow the spread of Covid-19.

Overall car sales in Norway crashed 24.3% compared to the same period of 2019 to 59,224, while sales of electric battery electric cars fell by a less steep 19%. The electric Audi e-tron was the most sold car.

Norway is by far the world’s biggest market by percentage for electric car sales, ahead of Iceland and the Netherlands and Sweden. Worldwide, electric cars make up about 3% of new cars, according to the International Energy Agency (IEA). That figure includes plug-in hybrids, which are omitted from the Norwegian numbers.

The Norwegian Electric Vehicle Association, which represents electric car owners, said that sales were lagging a parliamentary goal that all new cars sold should be zero emissions by 2025.

“To be on track for the 2025 goal the share of electric cars should be well above 50 percent by the end of the year. That is still possible but more and more difficult,” deputy leader Petter Haugneland told Climate Home News.

“It’s been a setback, hopefully it will be short term.” Amid big economic uncertainties, he  said it was hard to tell how factors such as lower oil prices affected sales.

Norway’s goal is earlier than targets set in other countries such as Britain in 2035 or France in 2040 as part of efforts to step up action to slow climate change under the Paris Agreement.

The IEA, in a report last month based on data to the end of April, estimated that the global passenger car market would contract by 15% this year compared to 2019, while sales of electric vehicles (EVs) would be roughly stable at 2019 levels.

“The EV market has been less impacted than the overall car market… and there have been additional measures to stimulate EVs, for instance in France and Germany,” Marine Gorner, an energy and transport analyst at the IEA who was one of the authors of the report, told CHN.

She said global car sales trends since April broadly confirmed the report’s findings. But the outlook was still highly uncertain – second waves of the virus and lockdowns would hit sales, as could new policy measures.

In 2019, the IEA said the share of electric cars rose in all nations except Japan, South Korea and the United States. US President Donald Trump, who favours the fossil fuel industry, is relaxing auto emission standards.

So far, many governments were backing electric vehicles, Gorner said.

China, for instance, the biggest overall market with 47% of 7.2 million electric cars on the roads, extended an exemption of new electric vehicles from a 10% purchase tax until 2022.

France, from June, introduced huge subsidies under which a buyer could get up to €12,000 discount for buying a new Renault Zoe while scrapping an old petrol car, reducing the purchase cost to €20,000 from €32,000.

Electric car sales in Europe this year were also boosted by the entry into force of new carbon emission standards for each manufacturer’s fleet, forcing a shift away from selling big, more profitable  and higher polluting petrol SUVs.

In early 2020, more than 7% of cars sold in the European Union had a plug, double rates in 2019, said Julia Poliscanova, Senior Director, Vehicles and Emobility, at Brussels-based NGO Transport & Environment.

The outlook was unclear but the experience of lockdowns might even help sales of less polluting cars.

“People saw during the lockdowns how great it is to live in cities with clean air,” she told CHN. “That’s also driving awareness.”