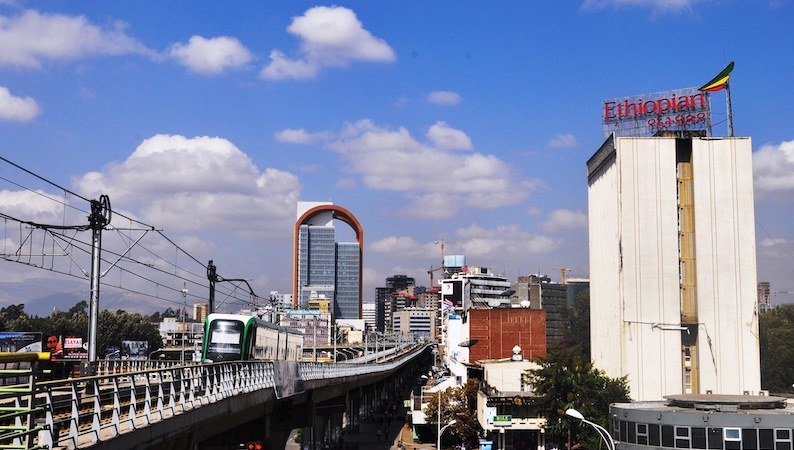 Go and ask any older person in Ethiopia’s capital city, Addis Ababa, and they will tell you the rivers were once very different.

“We were swimming in the rivers, played football and other games on buffers,” reminisced Takele Getachew, a 58-year-old man.

But for the past few decades that has not been possible, as the water became more and more polluted due to urban development.

“I witnessed closely how the Ginfile and Kebena have gradually been polluted and become waste disposal sites and sewerage spillways,” Getachew lamented.

After decades of neglect, there is now some hope for the waterways. Prime Minister Abiy Ahmed’s controversial Addis Ababa River Side Project, also known as the ‘Beautifying Sheger Project’, aims to clean up the rivers, making the city a model of green development in the process.

“I think the new riverside development project will save the rivers,” Getachew said, adding that they are a living memory of “past good times” and of the city’s “identity”.

The three-year project, expected to cost 29 billion birr ($900 million), aims to enhance the well-being of city dwellers by mitigating flooding and pollution through the creation of public spaces and parks, bicycle paths and walkways along the riverside.

But cleaning up Addis Ababa’s rivers comes with a human cost.

“The river was polluted and we were suffering floods during rainy season, but it is being cleaned now,’ said Asnakech Mesfin, 55, a mother of two who lives in an area known as the Sheraton expansion, an area affected by the development.

The government “started demolishing our shelters without any warning’’, Asnakech said. “They send police here and demolished our shelters during holidays which led us to live on the streets for 4 months.’’

“The question is where shall we shelter? Any development should give priority for people first.”

The project starts from Mount Entoto to Akaki, covering 56km of green areas along the rivers, passing through the former Basha Wolde Chilot, in front of the national Parliament at Arat Kilo and the heavily populated Piassa in Addis Ababa’s centre.

The first phase of the project, running from Entoto to Bambis Bridge, is under construction with financial support the state-owned China Construction Company (CCCC), and is scheduled to be finished by May 2020. It is estimated to currently be about 55% complete.

It runs down to the Grand Menelik II Palace, through an area with villages like Asnakech’s. Now, there are just the place names remaining, but no residents. 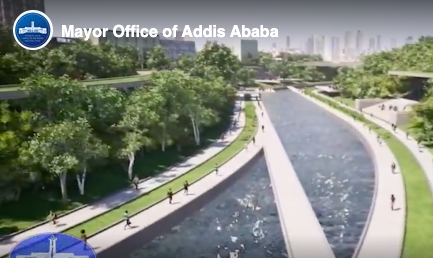 Not far from the project site, there are mud and plastic homes where poor residents still dwell. The few people left along the river are experiencing tough conditions, with huge lorries passing through villages and construction taking place around them.

Thousands fear displacement during the second phase of the project.

The development has been criticised for not respecting two of the 15 principles of sustainable development, agreed in 2012 at the Stakeholder Forum of the Rio 20+ meeting.

Principle 9 states that, “all citizens should have access to information concerning the environment, as well as the opportunity to participate in decision-making processes.”

And principle 5 says developments should ensure “individuals and societies are empowered to achieve positive social and environmental outcomes”.

Neither of these principles appears to have been followed.

Most of Asnakech’s village was demolished long ago. The residents were relocated to the outskirts of the city, paying for new government accommodation through a loan scheme.

“They told us immediately to leave the place. We would be happy if they informed us before’’, she said.

“There is no value just constructing buildings and developing green areas without due attention to livelihoods,” she said. “They are treating us like enemies.”

“The government has not visited us and discussed with us to find a solution. I have been suffering to support my son who is a grade 6 student here on the street,” Asnakech said.

The city government and prime minister’s office declined to comment.

Addis isn’t the only one of Ethiopia’s cities to have faced critical waste management challenges and difficulties implementing and sustaining urban green infrastructure. But the problem is more complex in the capital.

Dr. Manaye Ewenetu, Associate Engineer at Symmetrys Structural and Civil Engineers, criticised the sustainability of the city’s green strategy but approved of the prime minister’s vision.

Ewenetu is concerned about two things – access to water and pollution. “There is already water stress in the city and will continue to get worse unless a proper demand and supply assessment is undertaken by the relevant authorities,” he said.

“As it is observed on the ground, most of the Addis Rivers are non-perennial rivers which mean they do not have flows for most of the year except during the winter period.’’

A detailed hydrological assessment should have been undertaken to establish the flow regime of the rivers in the city to ensure the flow of water in summer season, he said.

He also worries about pollution in the rivers. “At the moment dirty water from all residential and commercial properties including factories, schools, and hospitals is discharged into the rivers,’’ he said.

So while Addis Ababa’s River Side project is a genuine attempt to green a developing city, critics say it is still a long way from being a model of sustainable development.

This article was produced as part of an African reporting programme supported by Future Climate for Africa. See our editorial guidelines for what this means.