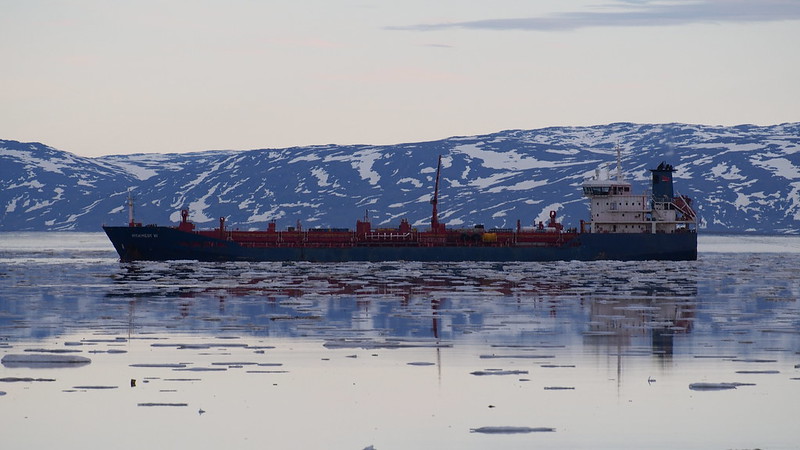 The International Maritime Organisation (IMO) is under pressure to regulate new shipping fuels introduced this month which may be accelerating warming in the Arctic.

From 1 January this year, stricter sulphur levels for ships have come into force to reduce air pollution and human health impacts such as cardiovascular and respiratory diseases.

Shipping companies and fuel providers have been using new blends of fuels to meet the sulphur guidelines. But instead, research suggested the new fuels could lead to an increase of the sector’s climate impacts.

A study conducted by Finland and Germany and submitted to the IMO found the new very low sulphur fuel oil (VLSFO) used by ships contained more aromatic compounds which are causing a surge in black carbon emissions – a short-lived pollutant that strongly absorbs sunlight and traps heat in the atmosphere, contributing to global warming.

The new hybrid fuels resulted in a 10% to 85% increase in black carbon emissions compared to previously used heavy fuel oil, the study found. Black carbon is already estimated to represent up to 21% of shipping’s climate impact.

“While black carbon stays in the atmosphere for only a few days or weeks, in that time, it traps 3200-times more heat in the atmosphere than carbon dioxide, measured over a 20-year period,” Bryan Comer, a senior researcher at the International Council on Clean Transportation (ICCT) told Climate Home News.

When black carbon settles on the Arctic, it reduces the reflectiveness of the snow and ice and generates heat, which accelerates melting. This makes the Arctic – which is already warming twice as fast as the rest of the world  – particularly sensitive to these emissions.

Global warming is melting Arctic sea ice and opening the region to more shipping, including a short-cut route between the Pacific and Atlantic Oceans.

Now campaigners are asking the marine fuel organisations responsible for drawing up official guidance on the supply and use of the low-sulphur fuel blends, why the impact on black carbon emissions was not identified before the new fuels were put on the market.

In a letter sent to the 11 organisations that co-authored the joint industry guidance, the Clean Arctic Alliance, a coalition of organisations campaigning for a ban on heavy fuel oil from Arctic shipping, demanded the authors to explain why action hadn’t been taken sooner.

“It’s hard to see how experts in marine fuels like yourselves could not have been aware of the elevated aromatics in these new fuels and of the link between aromatics in fuels and black carbon emissions, and we believe an explanation from industry and refiners is urgently needed,” the letter read.

Sian Prior, lead advisor to the Clean Arctic Alliance who wrote the letter, told Climate Home News: “If [the oil industry] know their product at all they would have realised there was a potential problem.”

The IMO’s sub-committee on pollution prevention and response is meeting next month and the issue of black carbon emissions and the use of heavy fuel oil in the Arctic are on the agenda.

An IMO spokeswoman said the committee will have the opportunity to discuss the submission made by Finland and Germany and report back to its parent body, the Marine Environment Protection Committee (MEPC), which is meeting at the end of March.

CHN contacted seven of the 11 organisations recipients of the letter which have a formal consultative status at the IMO.

A spokesman for Ipieca, the global oil and gas industry association for advancing environmental and social performance, said the remit of the guidance provided to the shipping sector was “limited” and  focused on supporting ship managers with the “operational aspects of the transition” and “help ensure the safety of vessels and crews”.

He added the research by Finland Germany focused on fuel blends “most likely to be used in 2020” and that at this stage there was “no comprehensive overview available that documents the actual variability of fuel types and representative fuel quality on the market”.

This, he said, made it “too early to draw any valid and meaningful conclusions on the level of black carbon emissions” associated with the use of VLSFOs.

Today, shipping is taking responsibility for our role in the climate crisis

The International Union of Marine Insurance (IUMI) and the Royal Institute of Naval Architects declined to comment before the issue was addressed by the IMO in February.

Prior said the response needed to focus on the Arctic and called for “immediate measures” to require ships in the Arctic – and eventually everywhere else in the world – to switch to higher-quality distillates fuels, which have lower sulphur levels and emit less black carbon.

More than half of all ships in the Arctic are already using distillates fuel, Prior said. “This is not an impossible ask and could happen very quickly. This issue needs to be taken serious by the IMO.”

Lucy Gilliam, a shipping campaigner at the NGO Transport & Environment, described the blunder “a failure of [the IMO’s] regulatory process”.

Gilliam called for countries parties to the IMO, such as the EU, to demand urgent action at the February meeting.

The shipping sector accounts for about 3% of global emissions annually. In 2018, countries parties to the IMO agreed to cut the sector’s emissions by 50% by 2050.