Losses from hurricanes, typhoons and wildfires in 2017 and 2018 are likely to cause reinsurance rates to rise by up to 5% agencies warn 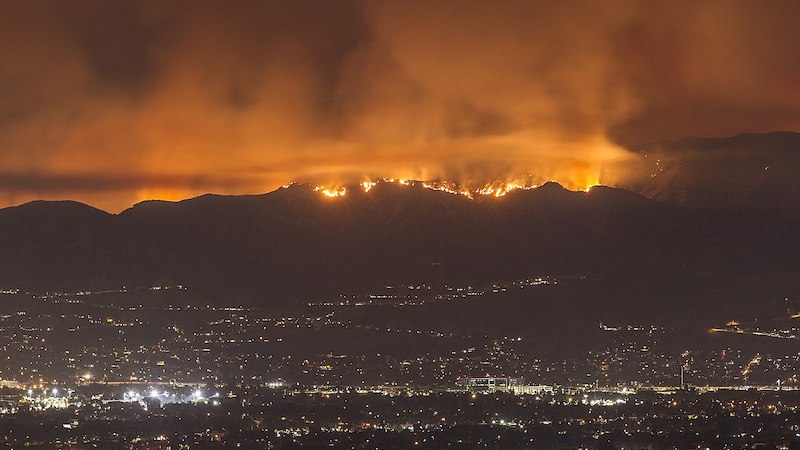 The La Tuna Fire burns in the Verdugo Mountains behind Los Angeles in 2017 (Photo: Scott L/Commons)

Two years of higher-than-expected losses from natural catastrophes are likely to prompt average reinsurance rate renewal rises of up to 5% in January, ratings agencies said.

After several years of falling rates due to competition and fewer natural disasters, steep losses from hurricanes, typhoons and wildfires in 2017 and 2018 are driving a reversal.

And as Hurricane Dorian ravages the Bahamas and bears down on the US, both Fitch and Standard & Poor’s said some rates could jump much higher.

S&P said rates would likely rise around 5%, while Fitch predicted 1-2% in briefings ahead of the reinsurance industry’s annual conference in Monte Carlo which begins on Saturday.

Reinsurers such as Swiss Re, Munich Re and the Lloyd’s of London market help insurers share the risks of disasters in return for part of the premium.

Insurers are increasingly concerned about the impact of bad weather linked to climate change, with an increase in wildfires in California among the most costly in recent years, something S&P said could see rates there jump 30-70%.

“This market remains in disarray, which will fuel further rate increases,” a slide from the S&P presentation said.

Fitch Senior Director Graham Coutts said he expected average rates to rise 1-2%, similar to the increases seen in January 2019, although further rises could be seen depending on the scale of losses from Dorian and other hurricanes.