Australia seeks to water down climate declaration at Pacific summit 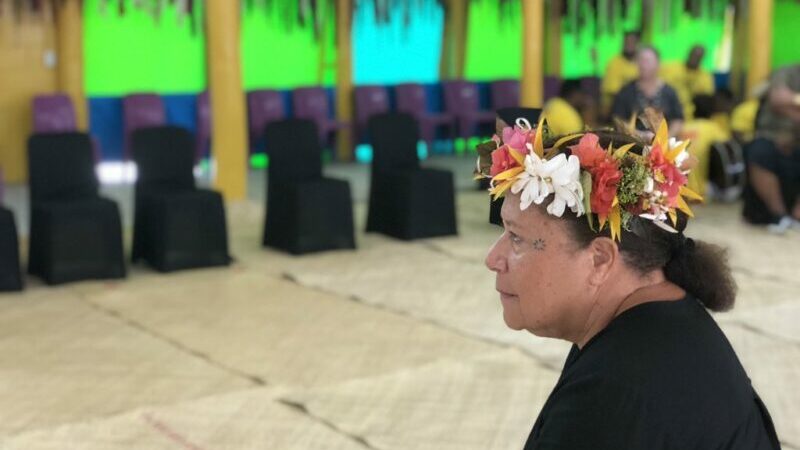 Australia is attempting to water down a declaration on the urgent need for climate action at a meeting of Pacific leaders on the low-lying island of Tuvalu.

An annotated draft of the Pacific Islands Forum declaration, seen by Climate Home News, showed Australia trying to suppress references to the climate “crisis”, 1.5C, carbon neutrality, a ban on new coal plants and phasing out of fossil fuel subsidies.

Climate change is high on the agenda at the forum this week, putting small island nations vulnerable to sea level rise on a collision course with Australian prime minister Scott Morrison’s pro-coal government. Morrison is due to arrive in the Tuvalu capital Funafuti on Wednesday.

Ahead of the leaders’ summit, governments were invited to comment on a draft declaration, to form the basis for a political statement to be negotiated over the next couple of days.

Fiji’s prime minister Frank Bainimarama, who presided over the 2017 UN climate talks, directly appealed to Australia to transition away from coal “to energy sources that do not contribute to climate change” during an informal meeting in Tuvalu on Monday.

Bainimarama said that while it was not for Fiji “to be prescriptive” over national affairs, he urged Canberra to appreciate “the existential threat” facing Pacific nations.

But in comments on the draft dated 7 August, Australia sought to wriggle out of its climate commitments and weaken language on limiting global temperatures to 1.5C of warming – the tougher target of the Paris Agreement that small island states say is essential to their survival.

Among suggested edits, Australia deleted references to the 1.5C goal being an “irrefutable red-line” for forum members, instead referring to limiting temperature rise “in line with the Paris Agreement”.

It also pushed back against efforts to bring national policies in line with the latest science on 1.5C from the International Panel on Climate Change’s (IPCC) report on 1.5C.

Australia agreed to “recognis[e] the information” in the report without endorsing its conclusion that global emissions must fall 45% by 2030 and reach carbon neutrality by 2050 for a reasonable chance of limiting warming to 1.5C. Indeed, Australia’s version excises any mention of achieving net zero emissions by 2050.

This is something only a handful of largely developed countries have committed to, with New Zealand indicating in notes that it would support achieving net zero carbon “around 2050”.

UN secretary general António Guterres has thrown his weight behind the issue, demanding every country start planning for carbon neutrality by 2050 ahead of his climate action summit on 23 September in New York.

Instead, Australia’s edits call on countries to “formulate and communicate long term [greenhouse gas] emissions development strategies by 2020” – a looser framework that allows for varying levels of ambition.

The draft statement echoes others of Guterre’s demands and calls for “an immediate global ban on the construction of new coal plants and coal mines” and the “urgent phase out of all fossil fuel subsidies”.

On both instances, Australia suggested deleting the paragraph, asserting that the issue is “not a shared forum priority”.

The draft statement concludes on a call to all countries, “with no caveats”, to take decisive and transformative action – a likely dig at Australia for planning to use Kyoto-era carbon credits to meet its Paris Agreement pledges. Again, Australia pushed to cut the “no caveats” clause.

In a statement, Morrison said the measure highlighted Australia’s “commitment to not just meeting our emissions reduction obligations at home but supporting our neighbours and friends,” adding the country was “doing [its] part to cut global emissions”.

Pacific nations leaders were left unimpressed by the proposal.

Tuvalu’s prime minister Enele Sopoaga told reporters: “No matter how much money you put on the table, it doesn’t give you the excuse to not to do the right thing that is cutting down your emissions, including not opening your coal mines.”

Sopoaga said the Pacific Island Forum declaration “must push forward and seek urgent actions, concrete actions by the global community” and expressed the hope “our Australian colleagues and others will take heat of this imperative”.

The statement urged world leaders to “acknowledge that we are already facing a climate crisis”, “dramatically accelerate a global response to achieve the goals of the Paris Agreement” and take action in line with Guterres’ demands for ramping up ambition.