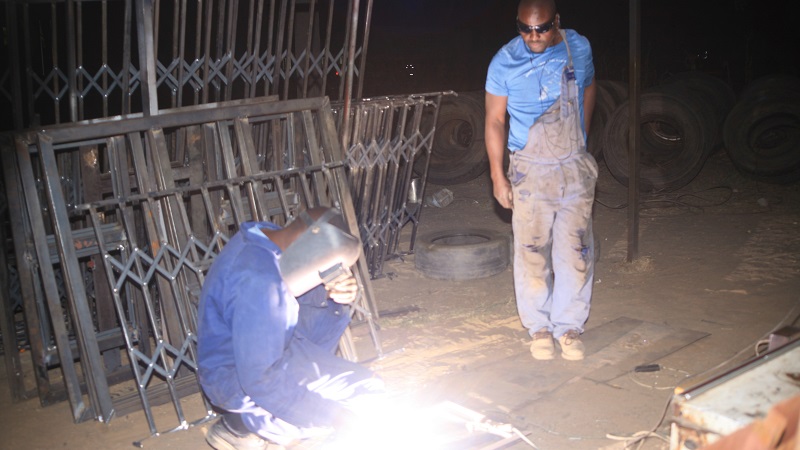 By Problem Masau in Harare

Zimbabwe’s capital is experiencing some of its worst power outages in memory, as drought hits hydropower production at Kariba Dam.

Electricity is mostly available between 10pm and 6am, forcing businesses to go nocturnal, run expensive diesel generators or face bankruptcy.

“The situation has reached another level. We have to do our work during the middle of the night, because that is the only time we are guaranteed electricity,” Enock Chihombwe, a welder in Harare, told Climate Home News.

“Our work relies heavily on electricity, so we have to work double shifts every day. At night we weld window panes and door frames and during the day, we will be selling the products.”

It is particularly tough for informal traders, who cannot afford generators or do not have ready access to fuel. Motorists must queue for several hours to get petrol or diesel.

Zimbabwe: Two million citizens have no water as Harare turns off taps

Even bigger companies are feeling the pinch. The country’s biggest mobile operator Econet said power cuts had reached unsustainable levels and were threatening the viability of the telecoms sector.

“The company is incurring high production costs by use and servicing of generators, while its prices have remained constant. We have made attempts despite serious fuel shortages to increase diesel allocated to our base station sites.

“Even with these contingency measures, fuel allocation is still inadequate to ensure the required optimum network performance and at current regulated pricing levels, the related costs are not sustainable,” said the company in a statement.

Cooking oil manufacturer Surface Wilmar said it had cut production to below 15% of its installed capacity as a result of the incessant power cuts.

Ordinarily, the company produces 8,000 tonnes of cooking oil a month, but executives said output had slumped to 1,500 tonnes.

“There is no production. The company requires 8 megawatt-hours per day to power its plant,” said company chairman Narottan Somani.

The country relies heavily on hydroelectricity, with Kariba Dam providing the bulk of power to both Zimbabwe and Zambia.

“Hydro-energy has increasingly become unreliable because of the frequency of droughts in the country,” said Panganai Sithole, a spokesperson for Zimbabwe Energy Council.

Zambezi Water Authority, which oversees the dam, said the level of usable water in the lake is down to 25%, making it difficult to produce electricity.

“It is a climate change issue,” said Priscah Mugabe, a climate expert at the Institute of Environmental Studies at the University of Zimbabwe: “Climate change is reflected in rainfall patterns in Zimbabwe from 1901 up to now.”

There have been noticeable shifts in the onset of the rains, with more extremes of heavy rainfall and drought, she added. There are also changes in the hydrology and run-off in catchment areas for the lake.

Aging coal infrastructure and weak purchasing power for imports only add to the strain on electricity supplies.

“Government fully supports the use of solar power and sees the adoption of renewable energy as a sustainable, clean and long-term option to the challenges of inadequate power supply.

“Solar energy can alleviate the country’s dependence on both hydro-power energy and non-renewable fossil fuels, and it can significantly reduce the importation of energy and save scarce foreign currency, which can be used for other national developmental programmes,” the minister said.

More than 10,000 solar home systems have been installed country-wide, the minister claimed, while 400 mini-grids have been set up at rural schools and clinics.

“To alleviate the situation on the power supply front, government resolved that a large-scale programme be implemented to promote the importation, local production of solar equipment and the use of solar power as an alternative energy source,” explained information minister Monica Mutsvangwa at a briefing.

“It is a good decision, it is innovative, and we welcome that we need to harness the natural power that we have. We are richly endowed in the sunshine. We need to convert it into energy so that we can manage our import bill,” he said.