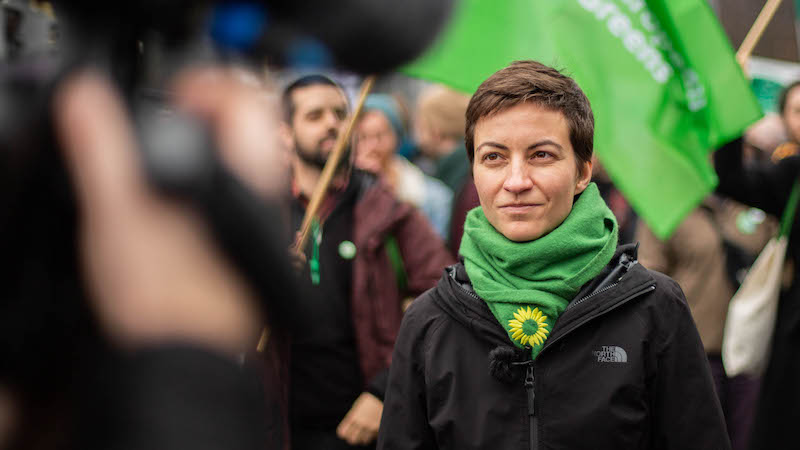 The Greens have doubled their numbers in the European Parliament at the last European elections. Ska Keller is co-chair of the Greens/EFA group in the parliament (Photo: European Greens/Flickr)

By Alexandra Brzozowski and Claire Stam for Euractiv

The European Greens have set tough conditions for giving their approval to designated European Commission president Ursula von der Leyen, who started her charm offensive among political parties in Brussels on Monday, ahead of next week’s vote in the European Parliament.

Ska Keller and Philippe Lamberts, the co-chairs of the Greens/EFA group in the European Parliament, met with von der Leyen on Monday, setting a genuine commitment to climate protection, sea rescue in the Mediterranean and a revamping of the Spitzenkandidat process as conditions for her election.

Long-term minister von der Leyen is “a very able politician,” Keller said following the meeting with Ursula von der Leyen, “But from my own point of view, that’s not enough to be commission president.”

Speaking to reporters after the one-hour talk, Keller acknowledged the meeting as a “very nice exchange”, but said it was too early to decide whether her party will throw her support behind von der Leyen.

“But just because you had a nice meeting, it does not mean that you will vote for someone, right? For us it depends on content, on programme,” Keller added.

The Greens have 74 out of 751 MEPs, making them the fourth largest group in the newly constituted European Parliament, with the German Greens being the largest national group inside the grouping with 21 MEPs.

The European Parliament still has to approve the nomination, which is why von der Leyen is looking for support in Brussels this week. According to the provisional timetable, the vote is scheduled for Tuesday (16 July) next week.

Political groups in the European Parliament last week slammed EU leaders for their ‘backroom package deal’ on the EU’s top jobs, with a potential inter-institutional conflict looming ahead as the chamber’s decision to approve it is on a knife-edge.

In order to be elected, von der Leyen needs an absolute majority of at least 376 MEPs. But the Socialists, especially the German SPD members, are showing a fierce opposition to her election, which is why the Greens have emerged as possible Queen-makers.

The Greens, who have largely missed out in the top job poker due to lack of Green government representation in the European Council, announced to push for Green content in the next legislative term.

But in order to do so, this would require “Green people in positions who can carry out the implementation”, Keller told reporters in Brussels.

“I am fully confident that cooperation with the Greens and their presence in the EU decision-making bodies will benefit not only the governing coalition but Europe as a whole,” Tusk said.

He then promised to “appeal to all my partners to involve the Greens in the nominations”, adding that he hopes “newly-nominated Ursula von der Leyen will also listen to my appeal.”

Although Von der Leyen’s talks with Keller and Lamberts didn’t include any “specific program proposals”  so far, “this will come later”, Keller said, she added that the issue of rescue at sea is a very vital and essential issue for her group.

“For us, it is not acceptable that we are in a situation where people drown in the Mediterranean and nobody helps.”

We have spoken about the fact that there are historical examples where it has happened in a similar way, where some states intervened and for us Greens it is absolutely key that we have sea rescue, this is the minimum that we expect from the EU,” she said.

Keller also sharply criticised the fact the Spitzenkandidat process has been killed off with the nomination of von der Leyen.

“Now we end up in the situation where the European Council comes up with someone no one had on their piece of paper (…). For us, this is really a major problem because it’s a step back in democracy.”

Ahead of the meeting of the Greens parliamentary group with the candidate, Green German MEP Sven Giegold further conditions for a vote of his group for von der Leyen. Before the election, the rights of the European Parliament would have to be strengthened, Giegold said.

On Sunday, co-chair of the European Green Party, Reinhard Bütikofer, brought into discussion the idea of postponing the vote of von der Leyen until September, saying he does not see any time pressure.

“We don’t see a good reason why we should vote for her and that has not changed, we want to see very concrete proposals of how the democratic issue can be addressed as well as the content issues, we haven’t seen them today, we’re ready to wait and see,” Keller told reporters.

Von der Leyen is set to meet the full Green group of MEPs for a hearing later this week in another attempt to achieve approval final approval before the next Parliament session.

On Tuesday, she is set for talks with the ECR Group and on Wednesday with the Socialists and the liberal Renew Europe Group. She will also meet with newly elected Parliament’s President David Sassoli.

This piece was originally published by CHN’s media partner Euractiv.