Three orbiters will give first complete view of earth’s surface, transforming the way carbon emissions are monitored and reported 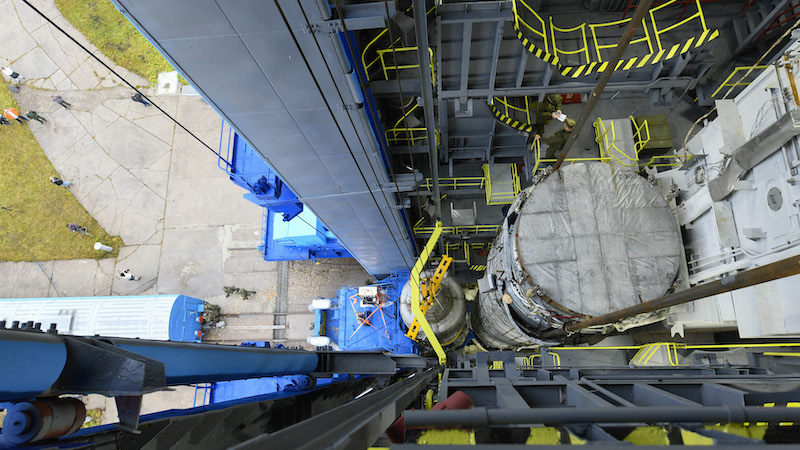 Europe is readying a new fleet of satellites that will monitor CO2 emissions at every point on earth, creating the first worldwide system to independently track polluters.

The fleet of three satellites is slated for launch in 2025, in time to inform the UN’s global stocktake of greenhouse gas emissions three years later, the European Space Agency (ESA) confirmed to Climate Home News.

The project is well advanced. The ESA has begun consultations with industry on building the newly-designed Sentinel 7 spacecraft, which will cost an estimated €633 million. Funding depends on the EU’s 2021-2027 budget, which needs to be agreed by the European Parliament and member states.

Guido Levini, the manager of the ESA’s Copernicus space segment programme, said he had a “high level of confidence” the funding would be secured, as the project had received blanket support from EU governments.

Once in orbit, the satellites will create the first global observation system for the gas most responsible for warming the planet. The project has deep implications for the Paris climate agreement and the global politics of pollution.

Right now, much of humanity’s CO2 is measured by proxy, with data supplied by countries on the fuels burned within their borders. These are known as inventories and can give a good approximation, particularly in highly developed countries. But things get muddy where governments aren’t able to track and measure their economy in detail; that is the case in a large part of the world.

“Globally inventories are not yet capable of providing a complete picture of greenhouse gas emissions of human origin,” said Dominique Blain, a member of the Intergovernmental Panel on Climate Change’s (IPCC) taskforce assigned to improve this reporting. Both approaches have strengths and weaknesses, she added, but could be mutually reinforcing.

A recent review of the science of inventories noted that satellites “could potentially be used to validate the emissions reported [by power stations and other major sources] for a certain time period”, said Blain. 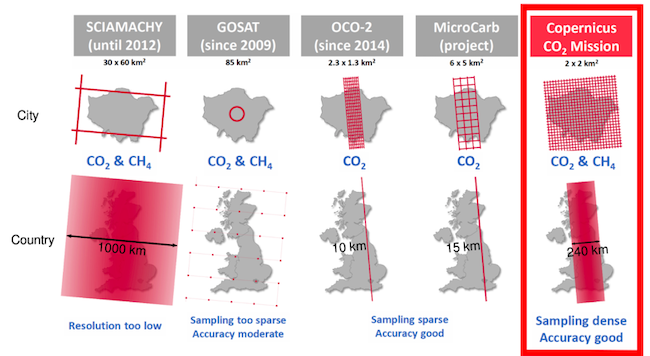 Coverage and resolution from existing and Copernicus’ Sentinel 7 satellites at city and country level (Source: Buchwitz)

Satellites currently in orbit give a sparse view of global CO2 emissions. The main technical limitation is their ‘swathe’, the width of the strip of earth they cast their eye on as they move around the planet. The widest lens available, 15km, is France’s Microcarb orbiter.

The three new Sentinels’ viewfinders will each see 250km of the surface, capturing the great plumes of gas created by power stations and cities. They will orbit 14 times every day. Michael Buckwitz, a physicist at Bremen University and an advisor to the project, said every source of CO2 on earth would be passed over every two to three days.

The three European satellites will join others expected to launch from China, Japan and the US, which will share their observations.

Together, the data will give a “much, much, much better picture” than we have today, Buckwitz said.

Above: Animation shows one day of coverage from three proposed satellites. A slight shift in trajectory each day will fill in the gaps. (Source: Buchwitz)

More information will enable policymakers to judge the impacts of their decisions in real time. For the first time, for example, a mayor could see how a new congestion charge reduces emissions from one week to the next.

It will also help scientists definitely answer key questions about the carbon cycle, such as whether human activity has caused rainforests to become sources of carbon, rather than sinks.

The data will be publicly available, bringing a new element of accountability to global carbon pollution. Under the Paris Agreement, a census of emissions will happen every five years, starting in 2023.

Europe is determined to fly the Sentinels by 2025 so they can provide data for the 2028 review. That new resource  will come at a pivotal moment. Many countries’ pledges to the Paris deal promised an emissions goal for 2030.

“It’ll be a wake up call as to the magnitude of the problem,” said Mark Drinkwater, head of the ESA’s earth and mission science division.

The programme will also condense the time it takes to check on progress, said Drinkwater. “Countries are not obligated to show their emissions report until the stocktake. This would allow transparent information in the interval.”

But the mention of an “eye in the sky” is enough to send controversy-averse space administrators into cold sweats. The target is not malfeasance, Drinkwater said.

“The mission is not being designed to police people’s emissions… I think what countries need is a tool and transparency in observations of emissions at city scale and even down to power plant scale. They need information to inform policy decisions,” he said.

Despite this, many interested eyes will be drawn to China, where the establishment of satellite monitoring of toxic SOx and NOx gases revealed a gap between reported and observed emissions.

“That was a big surprise,” said Buckwitz. “The emissions were higher, the trends were different than [Chinese scientists] expected.”

That lead to a reckoning that ultimately resulted in better practice. Recent studies have shown the inventories for Chinese SOx and NOx gases align with satellite data.

“They said it’s wrong, it cannot be true. But the Chinese scientists looked at the data and they realised that satellite data can provide better results. And now the emissions are going down,” said Buckwitz.

Last year, as the world tried to formulate rules for the Paris Agreement, the world’s largest polluter resisted tough requirements on its CO2 inventory.

“A top down approach to directly monitor emissions by the sources of pollution would help us cross-check the data and potentially identify discrepancies,” said Li Shuo, climate policy officer at Greenpeace China. “This would ultimately advance transparent reporting and improve compliance.”