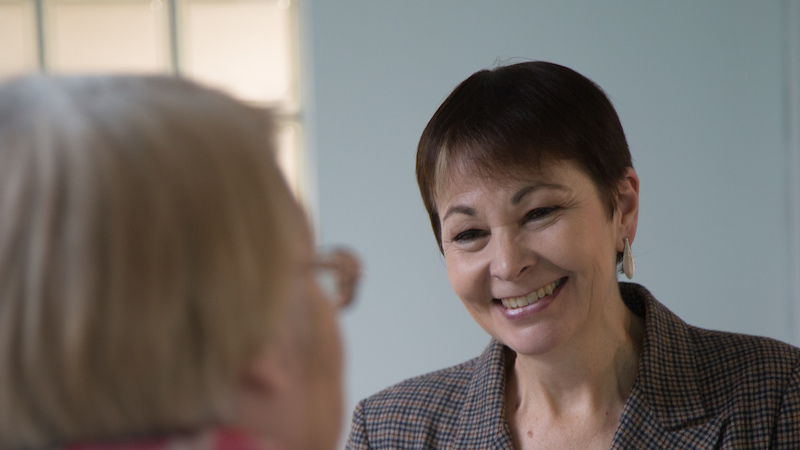 Two MPs presented a bill in an attempt to lay the foundations of a UK Green New Deal on Tuesday.

The bill, if passed, would force the Conservative UK government to implement 10-year public investment plan with a view to “decarbonise the United Kingdom economy and to eradicate inequality”.

The plan would specifically prioritise a “community and employee-led transition”. The draft legislation also calls on the government to “establish higher environmental standards for air, water and green spaces”, and “protect and restore natural habitats”.

“The idea is to force the government to invest in expanding forests and protected areas, restoring soils, peatlands, etc. because these are key carbon sinks,” Sophie Armour, a spokesperson for Lucas told Climate Home News.

In a video, Lucas described the text as “purposefully radical”.

“Scientists tell us we have only 11 years to prevent climate breakdown. At the same time we also have spiralling inequality in this country,” she said. “So we need to have bold action, business-as-usual just won’t cut it. We’re talking about a 10-year strategy to decarbonise our economy.”

“This bill sets a timetable that makes government, workers and communities the drivers of change,” Lewis said, “not the inheritors of chaos.”

The bill is the first UK iteration of the Green New Deal. In the US, the name has been attached to a sweeping, framework law championed by congresswoman Alexandria Ocasio-Cortez that aims to tackle climate change and social inequality as one. 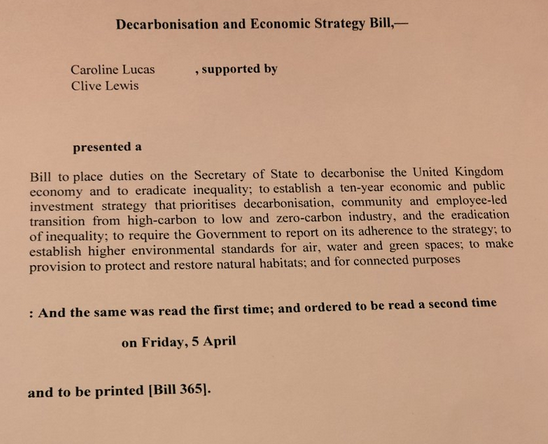 The two texts carry similarities. Both privilege a decade-long timeframe, with the US resolution outlining a series of 10-year goals across sectors ranging from the energy to agriculture. Both also stress the need for a just transition, with a view to supporting society’s most deprived communities, including those hinging on fossil fuels.

But the seven-line UK version is much lighter on detail than the 14-page US resolution.

Armour confirmed these logistical obstacles, stressing that the two MPs were “seeking an opportunity for the Bill to be debated in Parliament – which can be hard to come by at the moment”. Nevertheless, Armour was optimistic that “MPs from across the house” would back it. A representative for Lewis said they hoped to attract more co-sponsors.

Supported by politicians and economists, Lucas was one of the first to co-found the UK’s Green New Deal Group ten years ago.

Meanwhile, some Labour Party representatives, including Lewis, have been collaborating with Ocasio-Cortez’s team in a bid to craft a Green New Deal. There is also gathering grassroots momentum for the plan, with a Labour for a Green New Deal group, launching last week.