As invasive water hyacinth chokes fishing communities, the World Bank launches a third phase of investment to try and restore the degraded lake 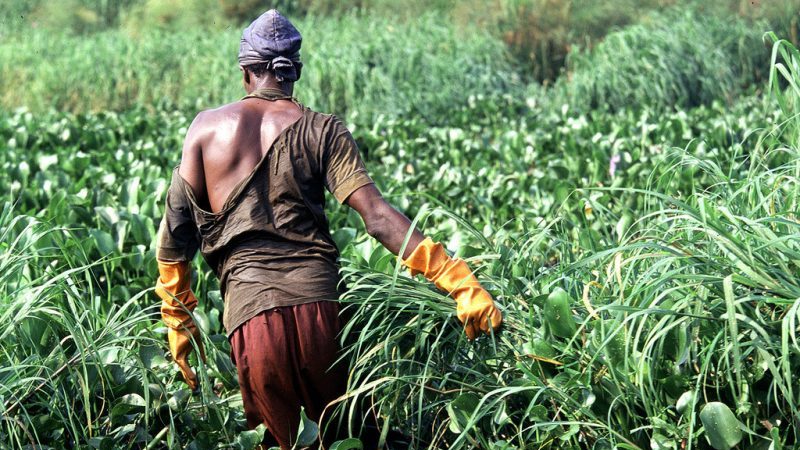 By Frederic Musisi Timberlake in Kampala

Adam Kidega, 45, recalls returning to the lake shore after a night fishing with his boat full of fish. In his younger years, he says: “It was always a bonanza.”

Today it is a different story. One can spend long nights on the lake and return empty handed.

If “very” lucky, Kidega says, he returns to Dunga fishing village with a handful of fish – two or three – and if unlucky, none at all. “That is how bad things have become.”

This part of Lake Victoria, near Kisumu in western Kenya, is choked with water hyacinth, putrid algae and other invasive plants. They flourish in the organic waste that drains in from cities and farms, creating poor conditions for fish to breed. Climate change intensifies the problems.

It is the “deadest part of the lake,” according to executive secretary of the Lake Victoria Basin Commission (LVBC), Ally Said Matano, who blames the population density of the catchment. “The higher the number of people you have in a catchment area the more the pollution and the more problems you get.”

LVBC is an inter-government body of the five East African countries sharing the Lake Victoria basin, home to 40 million people.

The world’s largest tropical lake, Victoria is an important source of water and hydropower, a reservoir of biodiversity and a medium for transport across three main basin countries: Uganda, Kenya and Tanzania.

Christine Kaaya, the programmes coordinator for Uganda’s parliamentary forum on climate change, says each of the major rivers, streams and wetlands feeding the lake is under some level of threat.

“Degradation of the catchment area is the main problem across the board, and with time the effects will catch up with the lake,” says Kaaya. “Already we have been warned about the ecosystem being badly damaged.”

A 2018 study by the Swiss-based International Union for Conservation of Nature (IUCN) found that freshwater ecosystems in the lake were inadequately protected.

“Freshwater biodiversity in the Lake Victoria Basin is in decline and the risk of species extinctions is increasing, with the major drivers of threat identified as: pollution; biological resource use, primarily overfishing; agriculture; and invasive species, particularly Nile Perch and water hyacinth,” the study says.

Climate change is an ongoing and future threat to freshwater species, especially fishes, which are shown to be particularly vulnerable, the report adds.

The biggest initiative to tackle the problem has been the Lake Victoria Environmental Management Project, first approved in 1996. Last year, the World Bank approved a $240m loan for the third phase of the project.

Results from the Kenyan part of phase one were judged “unsatisfactory” in a 2006 evaluation. The entire government team responsible was dismissed in 2002 “due to heightened dissatisfaction with observed performance”.

An NGO source, who asked not to be identified because he relied on government funding, gives the example of public flushing toilets. Several were installed, as an alternative to people defecating on riverbanks. But they were quickly vandalised and raw sewage continued to pollute the lake.

A spokesperson for the World Bank in Uganda declined to comment on specific criticisms, deferring to the government.

Alfred Okot Okidi, a top official at Uganda’s ministry of water and environment, said the next phase would learn from previous efforts. It involves regenerating “badly degraded” swamps and riverbanks in southwestern Uganda.

“What we want to do is to restore the catchment area, including through pulling people out of the swamps and give them alternative livelihoods,” Okidi says.

Other interventions include planting trees and containing sewerage from urban hotspots like Ugandan capital Kampala.