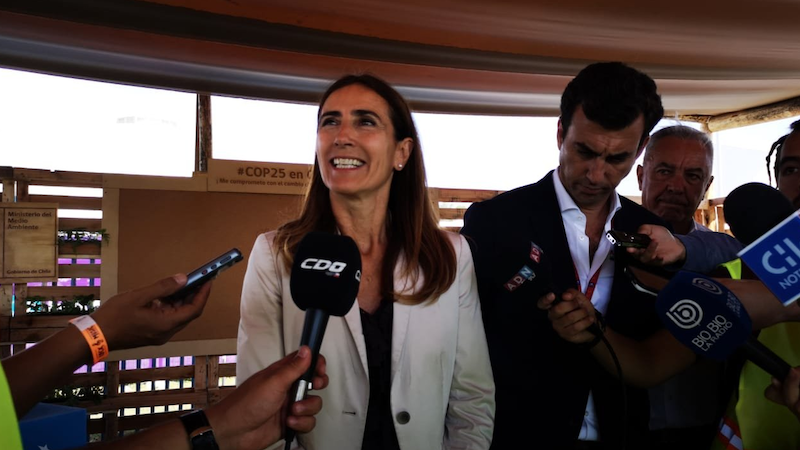 Schmidt has been named Cop25 president-designate by her government and her biography posted on the UN climate change website last week. She will be elected formally and take on the role at the conference in early 2020.

The president is responsible for shepherding complex and divisive talks towards an ambitious agreement. Of the past 24 UN climate conferences, seven were led by women and none since Maite Nkoana-Mashabane, then South Africa’s foreign minister, in 2011.

Chile volunteered to hold the 25th UN climate conference in Santiago, after Brazil’s new president Jair Bolsonaro withdrew as host. In January, Schmidt told the daily La Tercera that she had doggedly fought for Chile to take the role.

“When I realised that Brazil was considering pulling out from Cop25, I called the technical team, told them about it and asked them what were the chances that we could take on that responsibility. And unanimously, they told me: ‘None. We could never do that; this means an enormous amount of work'”, she said.

Schmidt claims to have then rung up the ministry of foreign affairs, where she was met with similar incredulity. Her last port of call was the president Sebastián Piñera.

“And the president asked me: ‘How much will this cost?’. And he added: ‘If you manage to get enough funds to carry this out, let’s go ahead, even if we have to work day and night’,” she said.

Sources have estimated the cost of running UN talks to be in the range of $80-100 million. Schmidt told La Tercera that investments in renewable energy and biodiversity could bring $120-150m into Chile’s economy.

Previously head of the National Office for Women, Schmidt has a record of seeking to incorporate gender issues into the climate debate, as women continue to disproportionately bear the brunt of global warming. Schmidt pushed for a greater focus on women’s vulnerability at the UN and at a regional meeting of ministers of the environment of Latin America and the Caribbean, according to a profile posted by the UN.

In a race to demonstrate the country’s climate efforts, Schmidt will be aiming to present parliament with Chile’s first climate legislation in August 2019. Few details about the plan have yet emerged, but Schmidt has said the bill will seek to legislate climate responsibilities for the country’s administrative actors, ranging from ministries to town halls, into the Chilean constitution.

In a statement to CHN, Greenpeace Chile director Matías Asun said Schmidt’s nomination was an advance for women’s representation in climate talks, but cautioned that her actions in the coming months had yet to define Schmidt as a “leader of the most important summit that has ever taken place in Chile”.

“We are probably going to see announcements, debates and committed words, but this must be reflected in facts,” Asun said. “And here we have to be attentive to the issues that today put the government and the minister in a position of evident contradiction; this is where the credibility of the government as host is at stake.”

Chile’s electricity supply currently depends on coal mining, Asun pointed out, which has led to the deployment of explosives in Mina Invierno, located in Patagonia next to national parks. The environmentalist said “thousands of citizens and children” were living “in so-called sacrifice zones of Chile, territories plagued with coal-fired power plants which have polluted at record levels”.

The vulnerability of Chile’s glaciers and the expansion of its forestry and agricultural sectors, which rely on increasingly scarce water from rivers, were also problems, he said, along with an expanding salmon industry in waters at the south of the country.

“Each of these issues are now reaching grave levels, placing Chile in the top ten of countries most affected by extreme weather events, such as wildfires, mineral spillages, red seas and melting glaciers and subsequent drought,” Asun said.