The case, brought by 11 members of the public and the NGO Plan B argued the UK’s 2050 climate target was not in line with the Paris Agreement 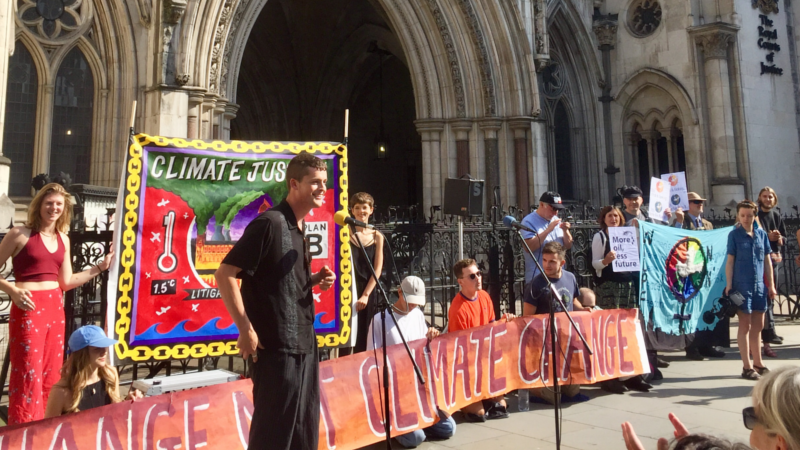 Plan B campaigners outside the Royal Courts of Justice on 4 July. (Photo: Soila Apparicio)

A UK citizens’ lawsuit over the government’s 2050 climate target hit “the end of the road” this week after an appeals court refused to hear the case, the climate legal group Plan B announced.

Plan B and 11 Brits lodged the case in December 2017, seeking to compel business, energy and industrial strategy secretary Greg Clark to raise the country’s target for cutting emissions by mid-century.

The plaintiffs were appealing the High Court’s decision in July not to hold a full hearing of the case. The Court of Appeals, however, sided with the High Court, saying there was “no compelling reason” why it should hear it.

While Plan B said it was disappointed with the ruling, it claimed in a statement on Tuesday that the legal action played a role in pushing the UK government to revisit its 2050 climate goal. Last year, the government asked the independent Committee on Climate Change to review the 2050 goal in light of the Paris Agreement’s second aim to limit the global temperature rise to 1.5C.

“That review is now well underway, and what matters is that the committee recommends a bold and ambitious target on the basis of the science and the precautionary principle,” said Tim Crosland, director Plan B.

Sadly, the Court of Appeal has refused our appeal for a full hearing for our 2050 Target case:https://t.co/0rI3YfxjZS

What matters now is that the @theCCCuk recommends to Government the urgent and radical programme of emissions reduction mandated by the IPCC.#RebelForLife

In its appeal, Plan B and the plaintiffs argued that the High Court judge had “misunderstood” the Paris Agreement and was wrong to accept the government’s argument that it embodies two goals, “when in truth there is only one target.” The 2015 accord aims to limit the temperature rise to well below 2C and “pursue efforts” for 1.5C.

They also said the judge should not have refused permission to bring proceedings when the issues at stake are “of the widest public importance”.

The appeal court decided these arguments had no prospect of success.

This is one of a growing number of cases in which civil society and individuals are challenging government policies on climate change. The Irish High Court heard arguments last week on an NGO’s case over the country’s plan for limiting emissions, while the European General Court has said it will hear a case over the EU’s 2030 targets.