In first overseas speech, president says he will strike balance between environment and “much-needed economic development” 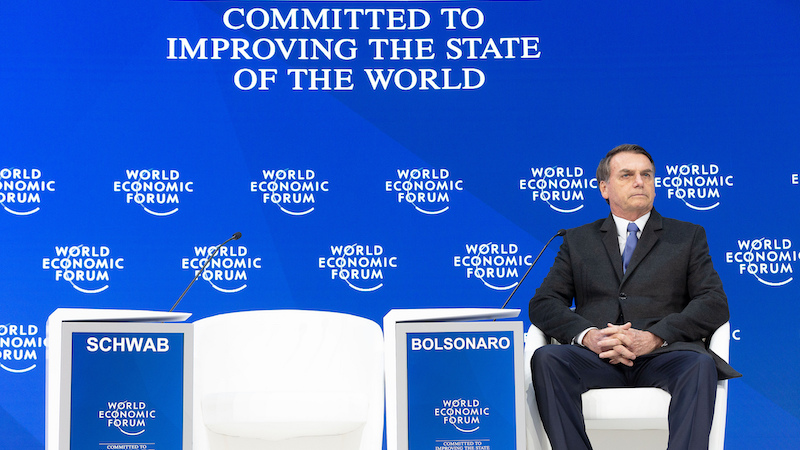 Brazil is a land of forests, minerals and business opportunities, president Jair Bolsonaro said in his first international speech on Tuesday.

“I want to introduce to all of you the new Brazil we are building,” Bolsonaro told the World Economic Forum meeting in Davos. “We are committed to changing our history.”

In a much-anticipated address, Bolsonaro attempted to paint a positive picture of Brazil’s environmental stewardship, inviting the audience of business leaders to visit the Amazon, while also calling for them to invest in the exploitation of the country’s natural resources.

“Brazil is home to the world’s greatest biodiversity and we have abundant mineral resources,” he said. “We want to engage with partners who master technology so that this marriage translates in progress and development for all. Our actions, make no mistake whatsoever, will certainly attract you to seize great business opportunities.”

During last year’s presidential campaign, Bolsonaro pledged to open up the Amazon to mining and agriculture and crack down on environmental NGOs. New environment minister Ricardo Salles has already started to make good on the latter by suspending all partnerships with civil society organisations for three months, in a move newspaper O Globo called a “war on NGOs”.

During the 2018 election campaign, Bolsonaro threatened to pull out of the Paris Agreement on climate change – a decision on which he has since backtracked, providing that the deal doesn’t impact on the country’s sovereignty over indigenous lands. A position he confirmed to executives in Davos on Tuesday, Folha de São Paolo reported.

“We are the one country that most preserves the environment,” he claimed, citing the country’s abundance of forests and calling Brazil’s stewardship was an example to the world.

In 2018, under the previous administration, deforestation reached a ten-year high. During the election period, with a Bolsonaro victory anticipated, forest loss jumped by 50%, year-on-year.

“It is now our mission to make progress in harmonising environmental preservation and biodiversity, with much-needed economic development,” said Bolsonaro. “One should not, of course, emphasise one more than the other.”

Bolsonaro vowed to stick to a free market agenda by carrying out privatisations, “streamlin[ing] rules and mak[ing] it easy to do business”.

The president has alarmed human rights activists by speaking nostalgically of the 1964-1985 dictatorship and aiming to freeze the demarcation of indigenous lands – which have traditionally protected Brazil’s forests and Cerrado from exploitation.

José Gregorio Mirabal, general coordinator of the Indigenous Organizations of the Amazon River Basin (COICA) urged Davos attendees “not to be distracted by president Bolsonaro’s efforts to calm investors interested in investing in Brazil”. Instead, Mirabal said, leaders ought to fight any moves that would speed up deforestation or threaten indigenous rights by warning Bolsonaro of consequences on the Brazilian market and economy.

“You cannot imagine what will happen if the government of Brazil implements its intention to roll back the rights of indigenous peoples to their forests, in favour of implementing projects for mining, transportation, communication and energy on indigenous territories.

“The outcome of implementing president Bolsonaro’s development plans will visit upon the entire Amazon a genocide and an environmental disaster on a scale that the world has not seen before.”