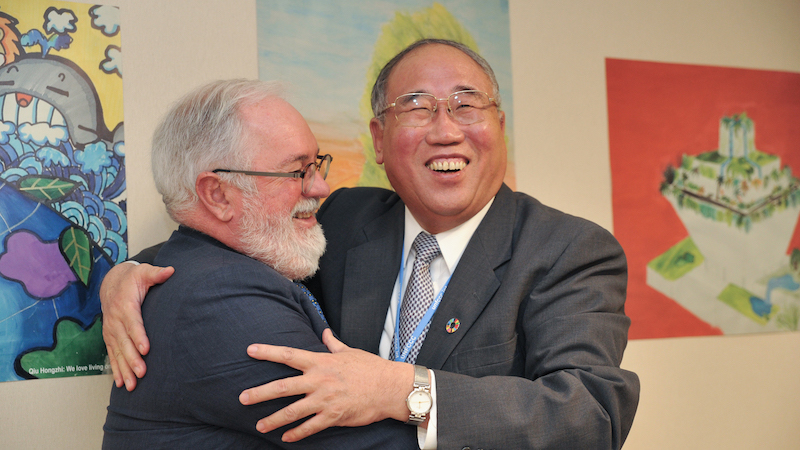 China has signalled it is open to following “uniform” global climate change rules, shifting from its usual push for a clear division of responsibilities for rich and poor countries.

The question of how the rules underpinning the Paris climate agreement will apply to developed and developing countries remains one of the biggest sticking points after nearly two weeks of negotiations in Katowice, Poland.

The European Union – along with the US and other rich nations – has been lobbying China to back a flexible system that gives poorer countries time to comply with a set of rules that will govern how countries cut carbon.

Xie Zhenhua, China’s special representative on climate change, suggested on Thursday that the country was on board – as long as the developed side helps out.

“Developing countries also have varied levels of capabilities,” Xie told reporters. “Some might need greater flexibilities, while others could voluntarily do more and accept uniform standards. With more support given to them and enhanced capabilities for these developing countries, they will be able to meet their requirements earlier and faster.”

The EU is willing to make it voluntary, so countries can choose when to join, as long as there is a clear deadline by which everyone must comply, a developed country negotiator following the talks said. “But we would expect China to start from the beginning.”

The EU and China are hastily drafting new proposals on parts of the “rulebook” under negotiation, at the request of UN secretary general António Guterres on Wednesday, according to the negotiator. As well as the system for ensuring transparency in climate action, they’re discussing rules on financial aid and the scope of national pledges. They plan to deliver the proposals to the Cop24 summit’s Polish presidency so it can incorporate them into a draft of the entire text, which is due Friday.

Guterres flew to Katowice on Wednesday, amid concerns that the Polish presidency was dragging its feet and political leadership was lacking. He met representatives from Poland, China, the European Commission, India, Canada, Brazil, South Africa and the bloc of developing countries known as the G77 plus China. The secretary general is expected to return on Friday, when the conference is due to end.

After agreeing to work with China, the EU also held a series of meetings on Wednesday and Thursday to shore up support for its flexible system of applying the rules. Those included Canada, Australia, New Zealand, the US, Mexico, Japan, Switzerland, Norway and some African, Caribbean and Pacific countries, the developed country negotiator said.

The aim: “To have a critical mass of developed and developing countries, to support one system of transparency when we go to the plenary on Friday.”

The way the rules are applied to countries could determine how effective they are in making sure countries fulfil their pledges under the Paris climate agreement. Loose requirements for tracking and reporting greenhouse gas emissions, for example, will make it difficult to assess progress or pick out the laggards.

Xie’s comments on Thursday broke away from China’s traditional allies: Brazil, South Africa and India. This group – known as the Basic group of emerging economies – had to date been the loudest in demanding a clearer division of labour, or bifurcation.

“There has to be some degree of flexibility – a reassertion of the differentiated approach, if you like – and the allowance made for developing countries,” South African tourism minister Tokozile Xasa said in a press conference on Wednesday. The push for “equal treatment” from some countries would represent a backslide on the Paris Agreement, which recognises the differences in capabilities, Xasa added.

A US state department spokesperson declined to comment on the kind of system it would support.

A burst of shuttle diplomacy on Thursday came amid deepening concern about the progress of negotiations. Many expect the summit to run over into the weekend. Poland’s Cop24 president, Michał Kurtyka, made a plea to ministers on Thursday afternoon, after hearing a stocktake of their progress on specific pieces of the text.

“I ask you to move forward as soon as possible… so we can achieve a meaningful outcome tonight,” he said. “We do not have the comfort of time, but we have the will and we have the power to achieve an outcome here in Katowice.”

The main concern for negotiators was that Poland had yet to deliver a full draft of the rules – making it hard for ministers to decide where they were willing to make trade-offs. Plus, many of the open questions were still extremely complex. “There are risks around ministers dealing with technical issues; that things could be weakened if they haven’t been fully briefed,” a British source said. “So we’re not there yet.”