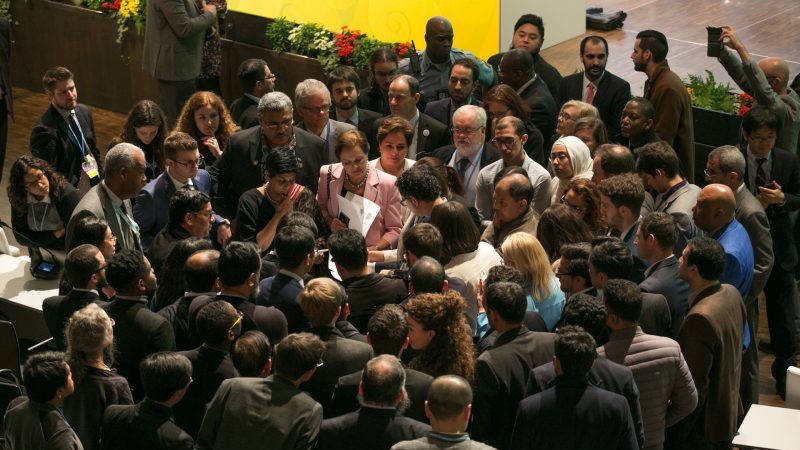 Ministers and lead diplomats huddle to resolve a dispute at Cop23 in Bonn, 2017 (Photo: IISD/ENB | Kiara Worth)

International climate talks are fiendishly complex and stacked with jargon. We are here to help.

This is a glossary of the key concepts, forums and alliances you need to navigate the UN negotiations and diplomacy that surrounds them.

It is a living document, so if you come across an acronym you do not understand, please let us know and we will update it as needed.

Paris Agreement: The international deal adopted in 2015 and brought into force in 2016, with a target to hold global warming “well below 2C” and aim for 1.5C. There are also sections covering adaptation, loss and damage, climate finance, technology transfer and capacity building. It is based on voluntary national climate pledges, coupled with a framework for reviewing and updating them every five years.

Nationally determined contributions (NDCs): The climate targets submitted by each country towards the Paris Agreement, which are to be reviewed every five years.

Global stocktake: An event to be held every five years, starting in 2023, to assess collective progress towards the goals of the Paris Agreement.

Kyoto Protocol: Adopted in 1997, this treaty has largely been superseded by the Paris Agreement. It committed developed countries to emissions cuts. The Doha Amendment applies targets up until 2020, but has yet to be ratified by enough parties to enter into force.

Mitigation: Cutting greenhouse gas emissions and boosting carbon sinks, to slow down global warming and ultimately stabilise the climate. In the real world, this means measures like shifting from coal to solar power and planting trees.

Adaptation: Dealing with the impacts of climate change on human and natural systems, such as sea level rise, drought and flooding. A prime concern of poor, island and coastal countries, it may include developing drought-resistant seeds and building flood defences.

Loss and damage: Harm inflicted by climate change that goes beyond what communities can adapt to, from crop failure to climate-linked migration. In Paris, rich countries acknowledged this suffering but quashed the idea they were liable to compensate victims.

Means of implementation: A catch-all term for climate finance, technology transfer and capacity building – three pillars of support from developed to developing countries so they can effectively play their part in the global effort.

Climate finance: Funding is a central – and contentious – element of international cooperation on climate change. Rich and poor countries fight over who should deliver finance, how and for what: public or private, grants or loans, mitigation or adaptation.

Transparency: The rules on monitoring, reporting and verifying national performance against climate goals. There is tension between developed and emerging economies over how universal or flexible the standards should be.

Response measures: A space for oil producers to air concerns about the impact of climate action on their economies. Under the Paris Agreement, everyone agreed to “take into consideration” these concerns.

Article 6: The section of the Paris Agreement dealing with carbon trading. It governs cap-and-trade systems like that between EU member states and, more controversially, the future for carbon offset schemes, in which rich countries pay poorer ones to cut emissions from a notional baseline.

LULUCF: Land use, land use change and forestry – the part of the greenhouse gas inventory covering human interference with the carbon cycle of plant life. That includes the uptake of carbon dioxide from planting trees as well as emissions from destroying vegetation.

UNFCCC: The UN Framework Convention on Climate Change, launched in 1992. The secretariat, based in Bonn, Germany, has since rebranded as UN Climate Change, but its formal name lives on.

Conference of the Parties (Cop): The big annual UN climate summit. It usually lasts two weeks, with technical negotiators laying the groundwork and ministers arriving later to thrash out political issues. The conferences are numbered: the Paris Agreement was struck at Cop21, in 2015.

Cartagena Dialogue: A regular informal meeting of countries at varying levels of development who support ambitious climate action. It rotates between host countries and offers a space for negotiators to find common ground on tricky issues, outside the high-pressure formal talks.

Petersberg Climate Dialogue: Conceptually similar to the Cartagena Dialogue, this is a meeting of 30-40 ministers hosted by the German government every year in Petersberg.

Negotiating groups: Countries at the UN climate negotiations team up into various groups who agree broadly similar positions on issues. When it comes to making statements in the plenary, having blocs instead of almost 200 countries speaking makes the process manageable. The blocs also help to represent the interests of poorer countries with limited negotiating capacity. Some blocs include: Africa, alliance of small island states (Aosis), Umbrella, like-minded developing countries.

African Group of Negotiators: Advocates for the continent’s interests, including finance, technology and training to implement climate policies.

Alliance of small island states (Aosis): Although small in size, these nations have a big voice at UN climate talks, representing some of the most vulnerable communities to the impacts of climate change. They pivot between allying with developed country partners on the high ambition agenda and the rest of the developing world in calling for support.

Basic group: Brazil, South Africa, China, India. Accounting for around 40% of global emissions, the big four emerging economies are increasingly important to the climate effort. They emphasise the historic responsibility of industrialised countries, while seeking maximum flexibility for themselves.

Least developed countries (LDCs): Like Aosis, the LDCs bear little responsibility for causing climate change, but are hit hard by its impacts. They typically advocate for high ambition and support to develop in a sustainable way.

Like-minded developing countries (LMDCs): A bloc of low and middle-income countries, many of them with fossil fuel interests. Like Basic, they put pressure on the developed world to take early action, including providing financial support.

Umbrella group: Australia, Belarus, Canada, Iceland, Israel, Japan, New Zealand, Kazakhstan, Norway, the Russian Federation, Ukraine and the US. Aligns with the EU on ending the hard divide between developed and developing countries, but members vary widely in their level of ambition.

Alba: The Bolivarian Alliance for the Peoples of our America is a group of socialist governments. It broadly promotes a rights-based and anti-capitalist approach, while defending the oil interests of some of its members. Venezuela, Cuba, Bolivia, Republic of Nicaragua, Dominica, Antigua and Barbuda, Saint Vincent and the Grenadines, Saint Lucia, Grenada, and Saint Kitts and Nevis

Ailac: The Independent Alliance of Latin America and the Caribbean is a generally pro-ambition and market-friendly bloc of eight countries: Chile, Colombia, Costa Rica, Guatemala, Honduras, Panama, Paraguay and Peru.

G77 + China: Despite the name, this group has 134 members. It encompasses a range of countries from the very poorest to rich oil exporters that are nonetheless defined as “developing” under the UN climate convention. They often have divergent interests, but unite around some common positions.