The men ‘deserve our gratitude, not a prison term’, Greenpeace’s executive director said, after judge handed them 15-16 month sentences 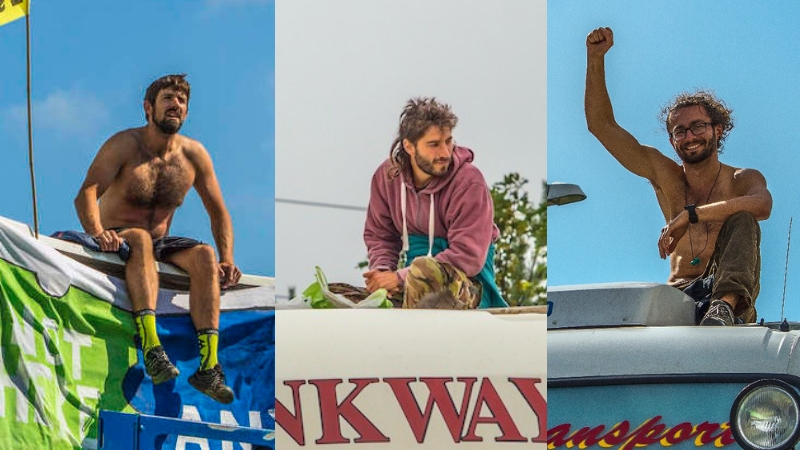 The four men spent up to four days in July 2017 camping out on lorries that were carrying drilling equipment to the Preston New Road fracking site in Lancashire, according to DeSmog UK. A jury found Blevins, Roberts and Loizou guilty of creating a public nuisance in August. Brock pleaded guilty so did not face trial.

They will be the first environmental protesters to be imprisoned in the UK in 86 years, according to Kirsty Brimelow QC, who was acting for one of the men. Although this is disputed.

Local residents have been protesting Cuadrilla Resources’ plans to drill for shale gas for several years.

In a statement released after the sentencing, Blevins said: “This won’t break us, we will come out stronger. Some may view us as victims, but we refuse to be victimised by this. The real victims will be future generations suffering preventable disasters caused by climate change. Our friends and fellow campaigners outside will continue to fight for a ban on fracking and for a just transition to a renewable and democratically owned energy system.”

“It’s a strange society that massively rewards those responsible for causing more climate change while putting those trying to stop it in jail,” Sauven said in a statement, noting that it comes just before the UN’s panel of climate scientists release their report on how to keep global warming at 1.5C.

“They have done what this government promised to do but is yet to deliver — making sure that we can leave our children and grandchildren a healthier environment than the one we found.”