South African environment minister, who made crucial interventions during the Paris climate conference, died on Saturday while still in office 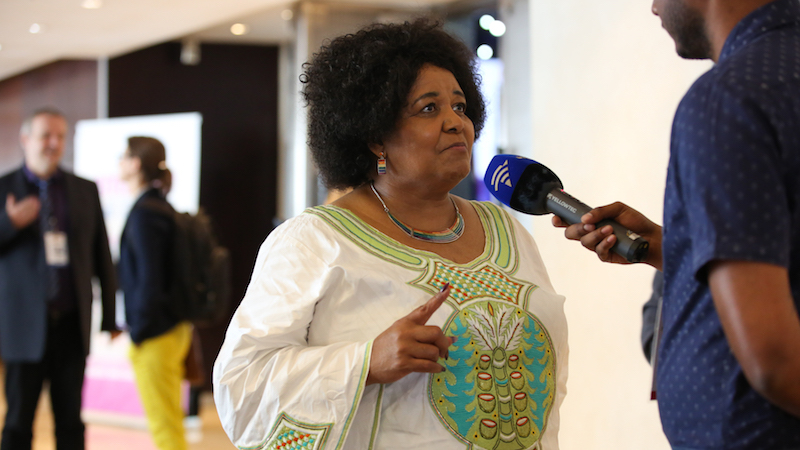 By Laurent Fabius and Laurence Tubiana

For our friend and colleague, minister Edna Molewa.

Edna Molewa’s death shook us all, but her work to ensure a climate safe world will outlast us all.

In the diplomatic heat of the Paris climate conference we were lucky to have her alongside. Edna was someone who had fought for justice all her life. Struggle was in her DNA. Her cool head, passion for her people and for the environment stood out in Paris.

Let’s be in no doubt: South Africa was an instrumental player in delivering the deal in 2015, not only as chair of G77 but also as guardian of the Durban platform.

A member of the Basic group with China, India and Brazil – Pretoria has long been a major player in climate.

In Edna the South African government had – in the words of president Cyril Ramaphosa, one of its most “outstanding” daughters.

Edna Molewa shares a moment with
Forest Whitaker, UNESCO goodwill ambassador for peace and reconciliation at the UN in July, 2018 (Photo: IISD)

She was a strong fighter for nature, wildlife and our global environment, evidenced by WWF’s awarding her its coveted “Gift to the Earth” award in 2013.

She had always fought for the poorest, the most vulnerable – the very people who will suffer from increased climate impacts in Africa.

And she was a bridge builder. In a world where we talk of walls and breaking alliances, she was the opposite. She could – and did – speak and negotiate with anyone with her very soft voice and her steely resolve.

There was a point ahead of Paris where it appeared the traditional split between developed and developing countries would be insurmountable.

Where it seemed the pervasive lack of trust between traditional camps would undermine all we had worked on, we can remember her sound advice. It was to keep countries together throughout the process. No “friends of the chair group”. Keep building up the trust.

We can remember too her calm resolve in the last hour of tension and crisis to finalise the agreement.

And then there was Edna and her G77 presidency team. All of them forceful advocates for climate justice in public and private, and yet a champion for what diplomacy can achieve if we all walk together.

Each party put forward its own red lines. Each country did not obtain everything it wanted. If every country had 100% of its wish list fulfilled our collective efforts would have amounted to zero. 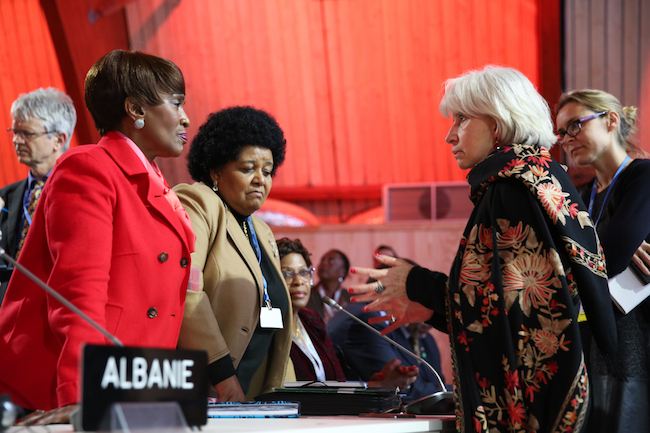 As Edna often reminded us, we need to show the world our collective effort is worth more than the sum of our individual actions. Because the beauty of Paris was we came to focus not on the red lines but on green lines of universal commitment.

Edna saw and spoke to us about the future she saw for her country: clean energy, sustainable and equitable agriculture, a just transition for all, more women in positions of leadership.

It was a vision she lived. And it was one that also inspired her opponents.

Look at the generous tributes she received not just from the ANC, but also the Democratic Alliance and Economic Freedom Fighters. She was a daughter of the new South Africa, and they knew it.

That means recognizing we cannot all walk alone, that we all have to fight our corner but be open to new views, that climate change is a battle we can only win as one.

As the Paris Agreement closed, Edna took the microphone.

“After climbing a great hill, one only finds there are many more mountains to climb,” she said, citing the words of another great South African leader, Nelson Mandela.

Indeed there are, and they may be steeper than the last. But with the spirit of Edna guiding us, we will continue on our long walk to a cleaner, greener planet.

Laurent Fabius was president of the Cop21 summit. He is now president of the Constitutional Council. Laurence Tubiana was France’s climate change ambassador and special representative for Cop21. She is now CEO of the European Climate Foundation.