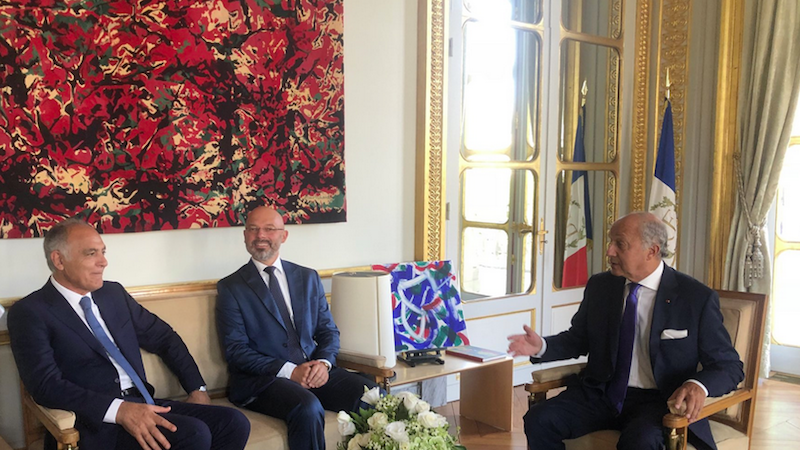 Michał Kurtyka has a lot to learn and not long to learn it.

So this week the Polish deputy energy minister, who will lead the most important climate talks since the Paris Agreement, phoned a few friends.

At the palace of France’s Constitutional Council in Paris, Kurtyka met up his predecessors as president of the UN’s annual climate talks, seeking to “learn from the past”.

Also at the inauguration of what is being called the Council of the Cop Presidents were Laurent Fabius, the former French prime minister who led the Paris talks in 2015 and former Moroccan foreign minister Salaheddine Mezouar, who headed the Marrakech conference the following year.

Climate Home News understands Kurtyka came up with the idea for the club and approached Fabius, who offered to host the first get-together.

France’s climate ambassador Brigitte Collet, who was also there, said the leaders were able to “share their experience and commit to the success of the COP24” in Katowice, Poland in December. Mexico’s ambassador to France Juan Gómez Robledo, who accompanied Espinosa to the meeting, said the group would “advise” on the organisation of the upcoming Polish Cop.

CHN understands their conversation focused on the rulebook of the Paris Agreement, which is due to be finished at Cop24. At the moment it takes the form of hundreds of pages of informal notes. The presidents agreed it was critical emergency talks next week in Bangkok produce a ‘negotiating text’ for diplomats to work from in December.

Kurtyka asked his fellow presidents to help him to prepare for a successful talks. There may be a further meeting before the end of the year. CHN understands both Fabius and Mezouar will be invited to attend the Katowice meeting.

A spokesperson for Kurtyka said: “The council is going to be a kind of common platform to identify challenges, threats and the opportunities for the international community. It will also enable the exchange of experience. The event took place in Paris to underline the continuity of the process of the negotiations – this year in Katowice we hope to fully implement the Paris Agreement.”

Fabius famously gavelled the Paris deal into being in 2015. The French presidency’s corralling of 195 countries is one of the world’s major diplomatic achievements. It is that kind of experience – and the relationships forged from it – that Kurtyka will seek to draw on in the coming months, sources told CHN.

Next week is huge. Get latest from Bangkok, every morning, in your inbox – sign up to our newsletter

The leadership of the UN talks rotates each year, often meaning an official with little experience of climate negotiations must rapidly get up to speed.

It is the third time in a decade Poland will host the climate talks, meaning it is the world’s most experienced climate host. But this year the country bucked the normal trend of appointing a high-level minister to the position.

Although an experienced EU negotiator, by his own admission Kurtyka is a novice when it comes to the cut and thrust of climate talks. After he was appointed in April, CHN was promised an interview with Kurtyka, from which he withdrew. According to his staff, he had not felt confident in his knowledge of the role and climate diplomacy.

Since then, he has been on a listening tour, meeting with politicians and negotiators from around the world.

Council of the COP Presidents. Just launched.
Learn from the past, work towards a successful @COP24 in @Katowice, inspire climate dialogue for the future.
Merci @LaurentFabius. Thank you @PEspinosaC and @Salahmezouar. TBC. pic.twitter.com/m3ihME9Zu0

All previous hosts of UN talks since Cancun in 2010 were invited to the Paris meeting this week, but many could not attend. The current president, Fijian prime minister Frank Bainimarama, declined the invitation but will be attending the Bangkok meeting next week.

Drawing on expertise from past presidencies is not unusual. At the latest Cop, which was led by Fiji, Moroccan diplomats assisted with crucial aspects of the negotiations.