Contrary to federal government modelling, as old gas turbines switch off in the next decade, renewable electricity share will soar 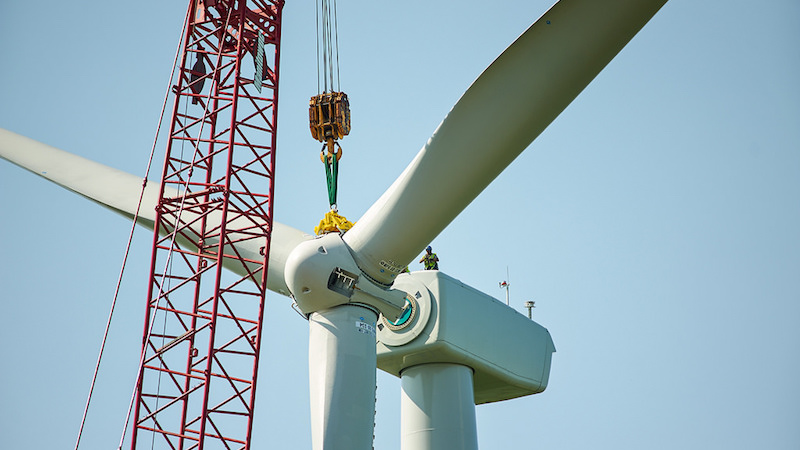 South Australia – the state that has become the punching bag for anti-renewable rhetoric, and the basis of the Coalition government’s National Energy Guarantee – is likely to source the equivalent of  100% of its electricity from renewables by 2025.

That, at least, is the assessment of the Australian Energy Market Operator, which makes this prediction as part of its Integrated System Plan, its 20-year blueprint for the integration of renewables into Australia’s electricity grid.

The prediction contrasts dramatically with the modelling prepared for the NEG by the Energy Security Board (ESB), of which AEMO is a member.

The ESB modelling (extract below) suggests that South Australia will reach 75% renewables by 2020 and 80% by 2022 – and then it somehow imagines the state installing not a single added megawatt of large scale solar or large scale wind until after 2030.

Just who the ESB is trying to kid with this sort of modelling nonsense is not clear. The ISP modelling, on the other hand, is alive to the sound of good economics and building intentions.

It factors in developments such as UK entrepreneur Sanjeev Gupta’s plans for up to 1GW of solar and storage, and the numerous other projects in the pipeline.

Gupta, as it happens, was presiding at the launch ceremony for the first of his major solar plants – 280MW at Whyalla – that he says will power not just the Whyalla steel works, but his other steel operations in Victoria and NSW.

He says it will deliver reduced costs, and it is hard to imagine him stopping just because of a vague promise from the ESB to the right wing of the coalition parties. Indeed, he sees up to 10GW across the country as the combination of solar and storage brings down energy costs to half of what they are now. 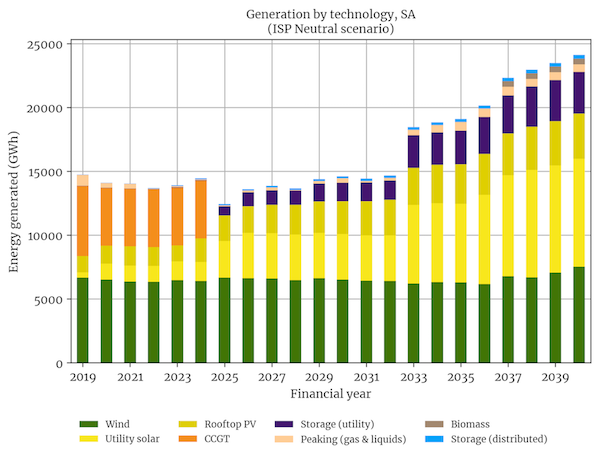 What’s really interesting about this graph above – put together by Dylan McConnell from the Climate and Energy College from the ISP data – is the growth in solar – both at a rooftop level but also in large scale solar, with big jumps in large scale solar in particular from 2025 and 2033.

Notice how combined cycle gas generation effectively disappears from around 2024, presumably from the time a new transmission link is completed to NSW, and peaking gas and diesel plays only a minor role behind that – much less than storage.

McConnell says the scenario underlines the value of interconnection and planning – and the fact that while the reduction in synchronous generation presents challenges, they are not insurmountable.

“Indeed they appear to be cheaper than business as usual,” he says. “The ISP suggest that a combination of deeper interconnection and other options such as synchronous condensers are a cheaper option than maintaining gas generation, given that AEMO uses a least-cost engineering optimization approach.”

This is the key point also picked up by another leading energy analyst Hugh Saddler, who wrote a detailed appraisal of the ISP for The Australia Institute, and put together the next two graphs below.

Saddler notes that the ISP modelling assumes South Australia jumps to almost 100% renewables in 2025, as the various gas turbines are shut down – including the ageing 50-plus year old Torrens Island gas-fired steam power stations, and the more modern combined cycle gas turbine (CCGT) stations at Pelican Point and Osborne.

“This is a particularly striking outcome,” Saddler writes. 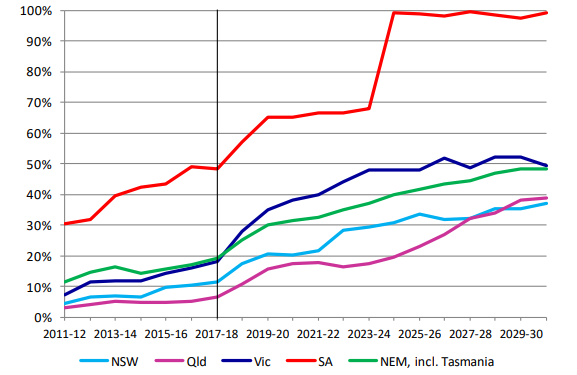 “Following the system black event in September 2016, AEMO introduced a requirement for a minimum level of synchronous generation to remain online in South Australia at all times. This requirement remains in force, though it has been somewhat relaxed since then.

“The key reason for the requirement is that during windy conditions, when the state’s entire electrical energy demand can be met by wind generators, the Heywood interconnector to south-west Victoria is the only source of system strength and security services if the local gas generators shut down.

“One of the key components of the first five years of AEMO’s integrated system plan is a new high-capacity synchronous interconnector, called RiverLink, to run from the mid north of South Australia to southern New South Wales and be completed by 2025.

“By implication, AEMO has concluded that, when RiverLink is completed it will be sufficient, in combination with the other new types of grid services mentioned previously, to eliminate the need for local synchronous generation.

“This is the clearest possible example of how a well-planned combination of grid level services can obviate the need for synchronous generation, and do so at lower cost.” 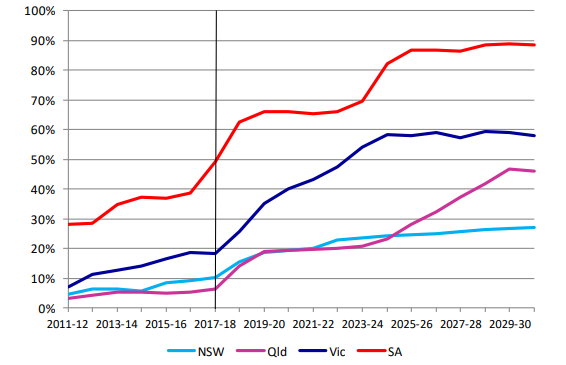 This next graph shows the share of renewables including the sharing of capacity from Victoria and NSW with those connections. Even counting the interconnector flow, South Australia is still running at around 90% renewable energy.

It is interesting to note the high rate of renewable energy in states like Victoria, and the low share in NSW.

The contrast with the debate being run in Canberra about reliability and the dangers of high renewable energy scenarios could not be any more dramatic.

To be sure, AEMO says there are significant issues in South Australia that will need to be managed, such as system strength, voltage and frequency. These are outlined in the ISP, and form part of the Group 1 and group 2 actions that the CoAG energy ministers have told the ESB to get on top of.

None of them will be affected by the NEG. Despite all the ravings about reliability, the AEMO plan envisages no “baseload” coal, not even any “baseload” gas in South Australia’s electricity mix.

It is all about exploiting the cheapest form of bulk generation – quite clearly wind and solar – and ensuring that these are married with dispatchable capacity that can fill in the gaps and provide the system strength.

Meanwhile, in Canberra, the base-load bovver boys are out in force. Not just the politicians but also the big business guys like Bluescope and smelter in the Hunter Valley. We can’t run the smelters on renewables alone, they claim.

Gupta and South Australia, are about to prove them wrong.

This article was originally published on RenewEconomy

We have set up a Patreon account. It’s a simple, safe and easy way for you to become part of a community that will secure and guide our future.>