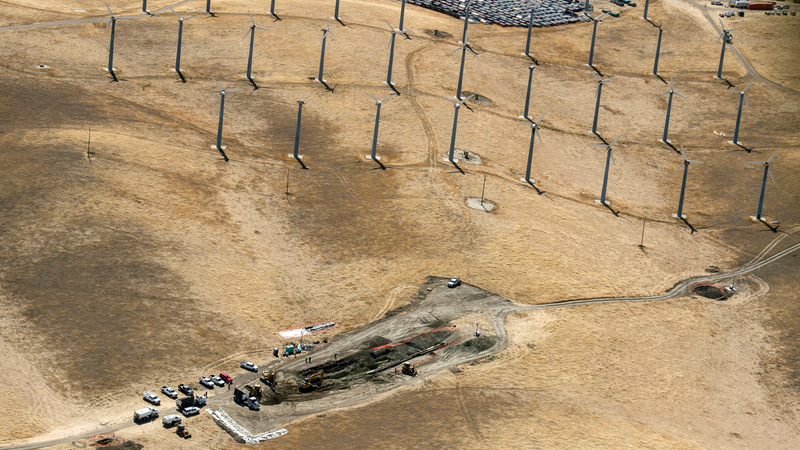 In September 2015, Shell’s San Pablo Bay oil pipeline burst near the Californian town of Tracy, contaminating the surrounding soil with 900 barrels of crude.

Two months later, in November, Shell was conducting tests to fix the problem when the pipeline spilled again.

Pipelines fail: it’s a widely understood risk when liquids are pumped at pressure across land and sea. Since 1986 there have been nearly 8,000 oil and gas pipeline incidents in the US, spilling 76,000 barrels per year, resulting in more than 500 deaths, 2,300 injuries and nearly $7 billion in damage, according to the Center for Biological Diversity.

Tiny cracks, often invisible to the eye, appear as infrastructure ages. Detecting them before they cause spills is a multi-billion dollar global business.

But according to industry insiders and a prominent accident investigator, oil pipeline inspection companies may be overstating their ability to find these defects.

A California state fire marshal report, accessed through a records request by Climate Home News, said three separate inspection companies assessed the San Pablo Bay pipeline during a series of accidents between September 2015 and May 2016. All of them failed to detect anomalies in the areas that burst.

The state fire marshal reported that Rosen tested the pipeline in December 2015. The company found more than 20 abnormalities, which were repaired. Later, more abnormalities were identified, of which some were also repaired. After that round of maintenance Rosen told Shell there were no “actionable defects” on the line, the fire marshal said.

After receiving the Rosen analysis, Shell increased the pressure in the pipeline on 17 May, 2016. Three days later, it ruptured again.

This time 500 barrels spilled. The soil had to be scraped up and held in containers on a nearby wind farm. Texan firm Kinder Morgan Energy Partners was called in by Shell to re-examine Rosen’s findings and confirmed the data had showed no obvious problems, the fire marshal said.

Inspection companies make no guarantees that their inspections will find every fault. But according to Richard Kuprewic, a pipeline incident investigator with 40 years in the industry and president of safety-consulting firm AccuFacts, services are less reliable than the vendors admit to their clients.

“The ability of inline inspectors to identify such features is, in my opinion, being way overstated,” Kuprewic said.

Kuprewic said the problem runs through the pipeline industry. CHN spoke to two former employees of an internationally operating inspection company. Both recently resigned over practices they said included misleading pipeline operators about inspectors’ ability to identify certain weaknesses in order to win contracts. They asked to remain anonymous. 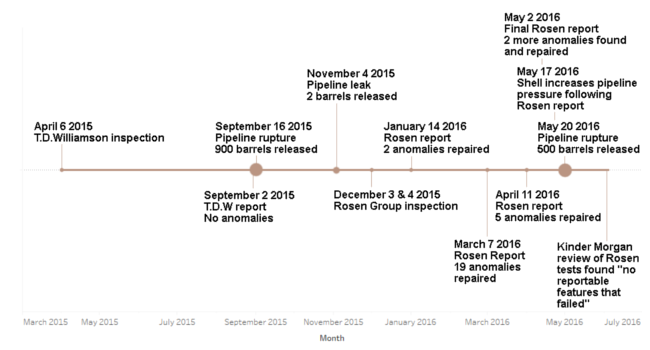 One of the former employees told CHN: “I joined the business to help prevent environmental disaster and in the end I had to lie to clients that actually wanted to accurately inspect their pipelines.

“The pipeline inspection business in general is going wrong. Some pipeline operators do strive to ensure security, but they are being misinformed by inspection companies that overstate their abilities,” said the former inspector.

A spokesperson for Rosen said the company could not answer questions about its analysis of Shell’s pipeline because of confidentiality. T.D. Williamson did not respond to emails. Kinder Morgan chose not to comment.

The websites of these and other inspection companies promote their services as reliable and accurate.

US industry standards, developed by the National Association of Corrosion Engineers, charge both operator and service vendor with analysing the capabilities of inspection tools.

But Kuprewic said inspection companies must know that they exaggerate the reliability of the tools. “No one sells [in-line inspections] claiming they don’t work,” he said.

Time to bring inspection products to market is often more important to companies than the quality of their surveys, said another former inspection company employee. The quality depends on the tools – called pigs – that run through the pipelines to scan them; as well as the software, which is developed in-house; and the size and experience of the team that analyses the data sets produced by the tools.

Operators are liable for pipeline safety, so inspection companies have no legal incentive to improve their tools, said Kuprewic.

“The operator is responsible for identifying the various types of threats that may be on segments of their pipeline. And guess who will be responsible if a pipeline blows up either from running or using an in-line inspection pig unwisely?” he said. 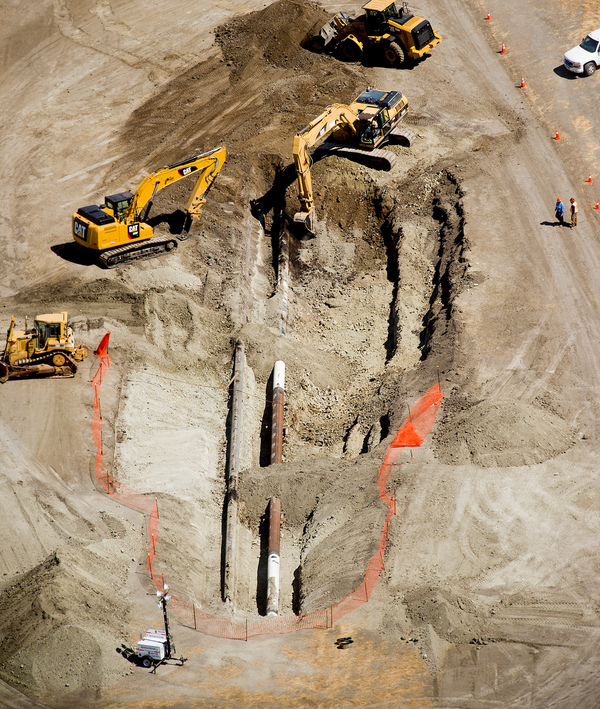 Contaminated soil was removed from around the site of the May, 2016 spill (Photo: Noah Berger/Greenpeace)

Particularly problematic are a type of pipelines that are commonly used in oil and infrastructure around the world, both onshore and offshore: Double Submerged Arc Weld (DSAW).

“This welding type is hard to inspect and cracks are very hard to find, this can lead to serious analytical mistakes,” a second former inspector told CHN.

This is the type of weld that binds the sections along Shell’s 285km San Pablo Bay Pipeline. There is no evidence the three inspection companies misled Shell in the case of the 2015-16 spills. But the fire marshal found that problems were missed. Rosen and Kinder Morgan both concluded incorrectly that their survey data did not report any problematic features at the location of the May 2016 failure.

According to the state fire marshal, a subsequent internal report by Shell found Rosen software had discovered a crack-like feature at the location of the failure. But during the manual review, a Rosen analyst had selected an incorrect setting and the depth of the anomaly was miscalculated.

A Shell spokeswoman told CHN the company continues to use Rosen for in-line inspection and has filed no legal action over the Tracy spills.  “Further, Shell will not publicly comment on the internal evaluation of contractor performance,” she added.

She told CHN that Shell had sought to improve its inspection methods after the incidents.

“We will continue to use the most appropriate assessment methodology on our pipeline systems as warranted and will decide best approach, given all the information available – this includes both in-line investigation as well as hydro tests,” the company spokeswoman said in a written response.

She noted the incident report prepared by the California State Fire Marshal Pipeline Safety Division had found one of the contributing factors to the spill had been fluctuating pressures of oil in the line. This was now being remedied, she said.

Shell is also replacing 19.3km of the pipeline after the fire marshal’s strong recommendation to do so.

Kuprewic said the Pipeline and Hazardous Materials Safety Administration (PHMSA) was aware of the issues with pipeline inspections and was “trying to introduce detailed safety regulation to avoid miscalculation”. The PHMSA did not respond to a request for comment.

Industry experts are asking for inspection firms to make their results public for peer review to verify assertions and environmental advocates are calling for stricter rules on pipeline inspections and higher penalties after incidents.

But Kuprewic warned that US federal government imperatives to cut, rather than strengthen, regulation was hampering those efforts.

Soila Apparicio created the timeline in this report.