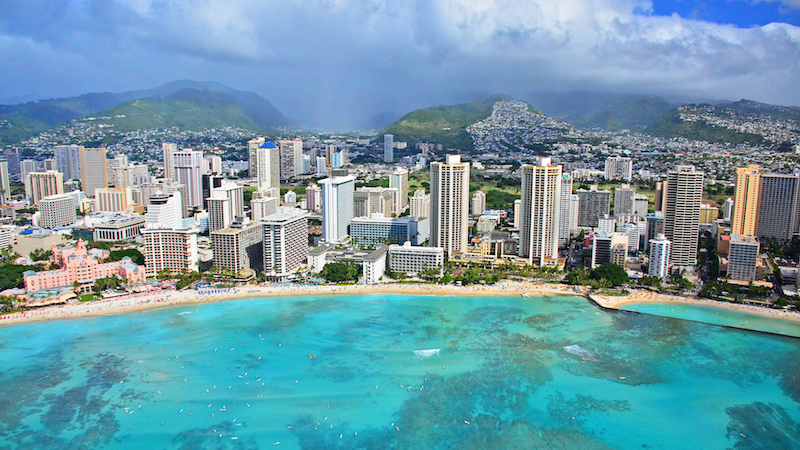 Hawaii has set the most ambitious climate goal in the US after it signed a bill to become carbon neutral by 2045 on Monday.

The state also signed a bill mandating sea level rise be factored into review processes for building projects, and a bill to restore the states’ forests for carbon offsets.

Hawaii already has some of the most rigorous climate policies in the US, including a mandate to achieve 100% renewable energy by 2045 and a law to uphold the Paris Agreement.

Before the bill signing, Hawaii governor David Ige posted on his Facebook page: “We are well on our way to meeting our [renewable energy] target and we are currently meeting our share of the US emissions goal under the Paris Agreement.

“This bill to go carbon neutral by 2045 will tie together these efforts – clean energy and emissions reductions – into one that focuses on decarbonising our economy and restoring our native habitat through carbon offsets to do reforestation and carbon farming.”

Following president Donald Trump’s withdrawal from the Paris climate agreement just over a year ago, Hawaii became the first state to bring in laws to align with the accord’s goals.

Other states, such as Rhode Island which pledged to cut emissions by 85% of 1990 levels by 2050, have voiced their commitment to continue climate action.

According to the US Energy Information Administration, Hawaii has the ninth smallest carbon emissions of all US states.

The bill to make the archipelago in the Central Pacific carbon neutral by 2045 notes sea level rise could cause $19 billion worth of damage in Hawaii.

Mayors from each county “have pledged to end the State’s dependence on fossil fuels by eliminating fossil fuels from ground transportation by 2045”, the bill said.

Hawaii joins countries such as Sweden in signing into law a commitment to becoming carbon neutral.