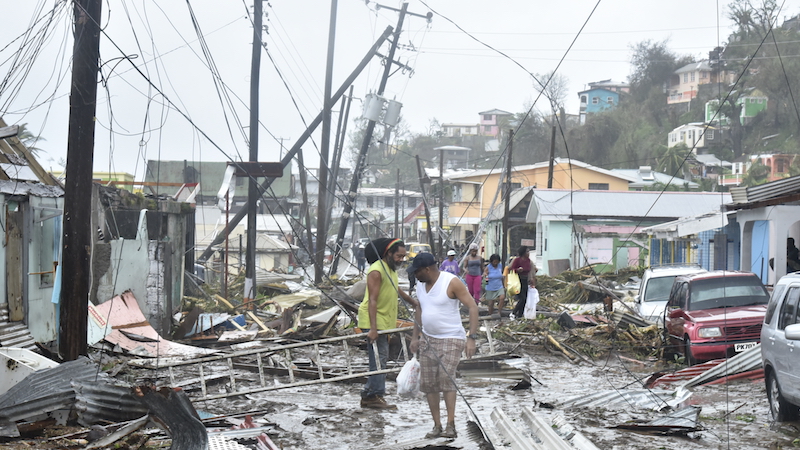 A road in Dominica, is littered with debris, uprooted vegetation and felled poles and power lines from Hurricane Maria, in 2017 (Photo: Roosevelt Skerrit)

Rich nations are not engaging in discussions on the financial support they need in order to deal with the problems of climate change, say developing countries and their advocates.

The Suva Expert Dialogue came to a close on Thursday, after two days of discussions in Bonn on what more the international community can do to help developing countries deal with the physical and financial impacts of climate change, otherwise known as loss and damage.

What action and support is needed by less economically developed countries was at the forefront of the issues that delegates wanted to tackle going into the talks.

Delegates noticed that Germany was the only developed economy to speak over the two-days, and according to Harjeet Singh, global lead on climate change for NGO ActionAid, the only other major economies he noticed in the room were Brazil, India and South Africa.

“I hope that their silence was not indicative of a lack of support,” said Dawn Pierre-Nathoniel, of the St Lucia delegation.

By one estimate, the annual un-avoided damages of climate change will cost $50bn by 2020, growing to $300bn in 2030. That’s on top of an existing pledge of $100bn per year to help poor countries develop sustainably and adapt to some of the dangers of a warmer world.

Pierre-Nathoniel said it was “not clear where the requisite support will come from” and that current financial instruments “are often out of reach of the poorest and most vulnerable”.

Insurance is a solution proposed by the biggest historical polluters in rich countries as an alternative to direct compensation, which they have fought to have excluded from the discussions. Developing countries’ main problem with insurance is that it is often too expensive.

One of Germany’s contributions was from its development agency GIZ and described insurance for climate change damage as a “magic tool”.

Singh said it was important “not to overhype insurance as a silver bullet that will solve all our problems”.

“We need to have governments on board,” said Singh. “The dialogue gives a very clear mandate that we need money.”

Julie-Anne Richards of Climate Change Advocacy is in agreement. “Developed countries have this idea that they can perform magic,” she said. Insurance is unhelpful as a financial instrument because it transfers risk “from rich to poor people, and [climate change] is not their fault”.

When asked what the greatest barrier to progress being made was, Richards responded that developed countries were “the number one and the only opposition”.

At a Climate Action Network International press conference on Tuesday, Sven Harmeling from humanitarian agency CARE International mentioned the importance of reaching consensus at the Suva Dialogue. “What we are seeing almost every day is new signs that climate change is basically happening faster and unfortunately more severe than many scientists and many people expected some years ago.”

But, Pierre-Nathoniel was optimistic about the doors that the Suva Dialogue has opened, particularly regarding awareness. “People still say that they are not clear as to what loss and damage is,” she said. “This will clarify what we mean.”