EU and island leaders are calling for more ambition at the International Maritime Organization, while major emerging economies resist a tough cap on emissions 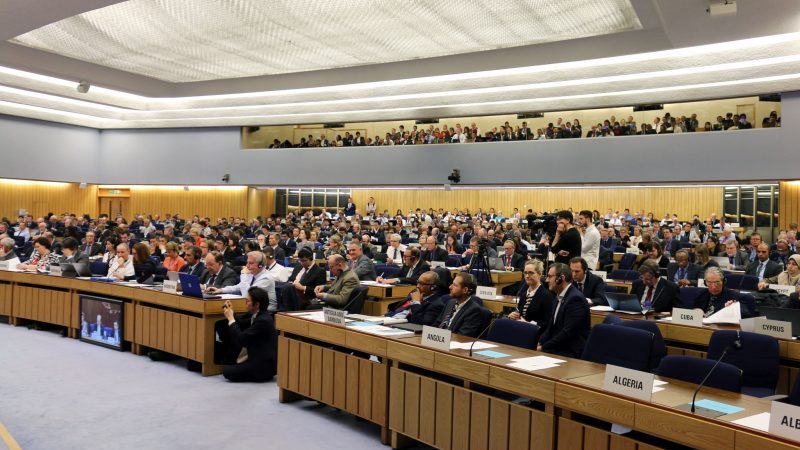 The negotiating room and press gallery at the International Maritime Organization were packed when talks on a climate target for shipping started on 9 April 2018 (Pic: IMO)

Negotiations over a long-term climate strategy for the global shipping industry are growing fractious as countries battle over the level of ambition.

A coalition in favour of a stronger emissions reduction target welcomed new allies in the run-up to this week’s International Maritime Organization (IMO) meeting, where delegates are due to adopt an initial strategy by Friday.

Canada has become increasingly vocal and New Zealand’s new Labour government has added its weight to the coalition spearheaded by Pacific island and northern European states. Australia and the Bahamas, the world’s sixth largest shipping flag state in 2017, are also chiming in.

But the compromise emissions reduction goal on the table — 50% by 2050 compared to 2008 — is half the level small island states say is needed to prevent the most disastrous effects of climate change in their countries. And the concern is the goal could be pulled down further in the final days of talks, a dozen national delegates and observers told Climate Home News, speaking on condition of anonymity.

“Yesterday and today make me less optimistic,” Green European Parliament member Bas Eickhout, from the Netherlands, told reporters on Tuesday in a barge converted into a pub across the street from the IMO headquarters. “What is on the table is the bare minimum, and it’s not good enough.”

EU leaders have threatened to impose regional regulation on ships entering the bloc’s ports – anathema to the industry – if the IMO does not step up.

“Every sector needs to bear its responsibility,” said Jytte Guteland, a centre-left EU lawmaker from Sweden. “We [in the European Parliament] don’t want to do things if IMO is taking responsible action, but we are willing to go further if necessary.”

Most Pacific and small island states want to see full decarbonisation by 2050 or even 2035, in line with the Paris climate agreement’s stretch goal to limit global warming to 1.5C. Marshall Islands Minister David Paul said in a speech on Monday that the country will “very publicly disassociate” from an outcome that doesn’t quantify an emissions reduction target consistent with that goal.

“We will have to send the message that at the end of the day the technologies do exist for [the industry] to decarbonise by 2035, and there’s really an opportunity for the taking in order to make their business far more efficient and far more profitable,” Paul told Climate Home News.

European countries and the European Commission have proposed a 70% emissions cut by 2050 as the least the sector should do, while aiming for 100%.

But that looks increasingly hard to achieve as major emerging economies and flag states dig their heels in at the provisional compromise of a 50% cut. An alliance including Brazil, Panama and Saudi Arabia is resistant to the idea of a cap on emissions, preferring to focus on cutting emissions relative to each tonne of cargo shipped. With volumes of seaborne trade set to rise, that approach would not guarantee emissions cuts in absolute terms.

Trying to go above the text on the table risks disrupting the fragile consensus, said Simon Bennett, deputy secretary-general of the International Chamber of Shipping. “The only question about what the European Union is asking is whether it’s going to be acceptable to other countries,” he said. “And if there is no agreement this week, it’s going to be very damaging.”

The maritime industry accounts for 2-3% of global greenhouse gases, but its emissions are projected to increase by as much as 250% by 2050 without intervention. The International Chamber of Shipping and other industry players want the IMO to reach a deal this week that provides a signal for investment in cleaner fuels and efficient technology.

Climate advocates continued to speak up for higher ambition at the IMO on Tuesday, with activists picketing the entrance. Inside the building the talks were hushed, with huddles of NGO representatives and delegates whispering about strategy.

Failure to commit to full decarbonisation by mid-century will “create serious investment uncertainty for the industry,” said Faig Abbasov, shipping officer at the NGO Transport and Environment.

The IMO’s plenary instructed the climate working group to submit a written report by Thursday, and to consider whether there’s a need for an extra follow-up meeting on how to implement the strategy. Most delegates expect an initial deal will be agreed, as failure to do so would look bad for an industry already under fire for moving slower than most to tackle greenhouse gas emissions. The final strategy is due in 2023.

Unlike the UN’s climate change summits, where ministers fly in to push the negotiations to a close, the IMO decision is expected to remain in the hands of specialist negotiators and the organisation’s chief Kitack Lim.