Companies owned by WV governor exploited a supposedly temporary status to defer environmental clean up and leave miners in limbo, in some cases for decades 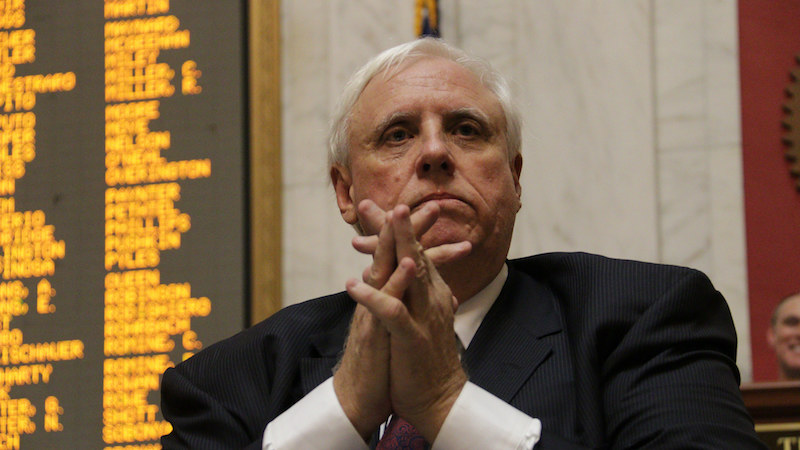 Few politicians have bound themselves more tightly to the fortunes of coal miners than West Virginia governor Jim Justice.

Alongside his son, James Justice III, Justice owns a coal empire spanning dozens of mining companies across Appalachia. Under his watch, employment at those companies has plummeted. While, for years, he has exploited a regulatory loophole that allows him to leave mines idle and defer environmental clean-up, a Climate Home News investigation has found.

In Virginia, only one of Justice’s approximately 20 mines still produces coal. Instead of closing the operations and restoring the land, his companies often place their mines into ‘temporary cessation’.

Under this status, regulators allow miners to pause both production and land reclamation. Temporary cessation is meant to be a short-term response to low coal prices – in Virginia (and other states) it must be reapproved every six months.

Records compiled by CHN show coal mines belonging to Justice have been idle for years at a time. Unreclaimed, idle mines mean ongoing pollution and community health impacts, while miners are put out of work indefinitely. The practice is not illegal, nor is it confined to Justice companies; CHN discovered many companies, particularly in Central Appalachia, using temporary cessation for extended periods.

Bob Mooney spent 20 years as a coal regulator, first with the Ohio Department of Natural Resources’ Division of Reclamation and then with the federal Office of Surface Mining Reclamation and Enforcement (OSMRE). “[Temporary cessation] is a very big loophole in the law that essentially allows a company to leave a site unreclaimed for long periods of time,” he said.

While Justice’s companies have idled mines in West Virginia and Kentucky, his Virginia operations rely the most on temporary cessation.

Records from the Virginia Department of Mines, Minerals and Energy (DMME) reveal permits belonging to Justice’s largest company operating in the state, A&G Coal Corporation, have been approved for temporary cessation 20 times since 2012. One of A&G’s permits has been idle nearly continuously since 1984. Another of his companies, Black River Coal, LLC, owns a mine currently in temporary cessation that has been in and out of the status since 1997.

Employment plummeted after these mines became inactive. A&G employed 418 people in Virginia as recently as 2010 but now only accounts for 89 jobs, according to data from the DMME and the Mine Safety and Health Administration.

Justice’s second-largest company in the state – Virginia Fuel Corporation – has a maximum of three current employees in the state. That number was 186 jobs in 2011, a year before four of the company’s permits entered temporary cessation. Numerous phone numbers linked to A&G were disconnected, and employees of A&G and Virginia Fuel did not respond to calls or emails. 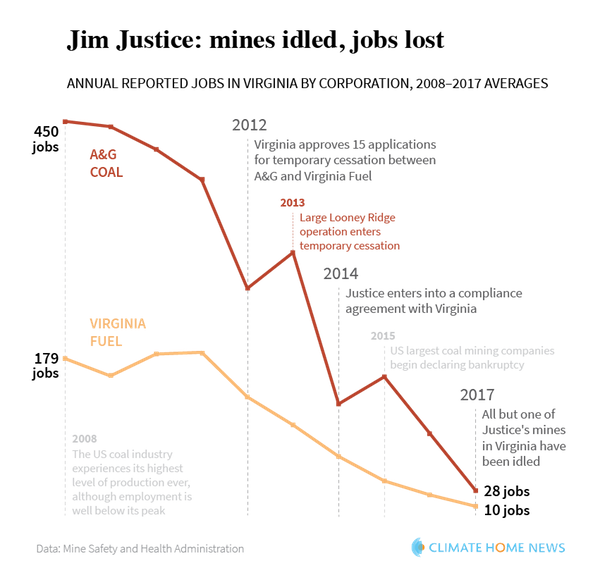 In southern Appalachia, Justice Coal of Alabama LLC’s Crane Central Mine also paused production without closing. The operation employed 45 miners in 2012 but dropped to only three when production halted in 2014.

After years of idling and not reclaiming mines, Justice entered into an agreement with the state of Virginia that effectively keeps the majority of his permits idle but slowly begins the reclamation process.

Butch Antolini, the governor’s director of communications, declined to comment, directing questions to the “Justice family corporation”, as did a representative of Justice Coal of Alabama. Representatives at the corporate head office directed questions for the coal companies mentioned in this story to several non-working email addresses.

While campaigning in 2016, Justice won the endorsement of miners’ union president Cecil Roberts, who said Justice was the only candidate “who understands the coal industry and how to keep miners working”. That same year, Justice refused to back the leader of his own party Hillary Clinton, claiming she would put coal miners out of work if she were president.

In August 2017, while lobbying president Donald Trump for a $4.5bn aid package for Appalachian coal, Justice publicly dumped the Democrats, announcing at a rally in Huntington, WV, that he would register as a Republican. Trump was in attendance and opened the rally by pulling a ‘Trump digs coal’ placard from the crowd and posing with it.

“Jim came to the Oval Office a couple of weeks ago. We talked about how we are working together to open up the coal mines in this state,” said Trump.

A week later, Justice said in a statement: “Keeping our Eastern coalfields and our miners working is critical to national security.”

In January 2017, two weeks after he assumed office, Justice said he intended to place his businesses in a blind trust to avoid conflicts of interest. But his January 31, 2018 financial disclosure statement still listed his coal companies as business interests.

Tarah Kesterson, the Virginia DMME’s spokesperson, said the department uses “a combination of targeted reclamation schedules, increased inspections and penalties” to ensure Justice’s unreclaimed mines do not become a liability to the state. On the state’s willingness to allow miners to extend their temporary cessation, she said: “Each requested extension is reviewed on a case by case basis with consideration to the environment being a priority.”

Pro-coal lawmakers, such as Pennsylvania’s Matt Gabler, have argued that long periods of idling “give operators needed flexibility in their business options and not leave them facing permanent closure during difficult economic times.” Gabler said this when proposing to remove his state’s 90-day time limit on temporary cessation.

Chuck Nelson, a straight-shooting, fourth-generation coal miner from southern West Virginia, said that when mines idle, nearly everyone is thrown out of work. Travelling across Appalachia, CHN heard the same story of idle mines and miners working month-to-month and losing their paychecks and benefits between stints. 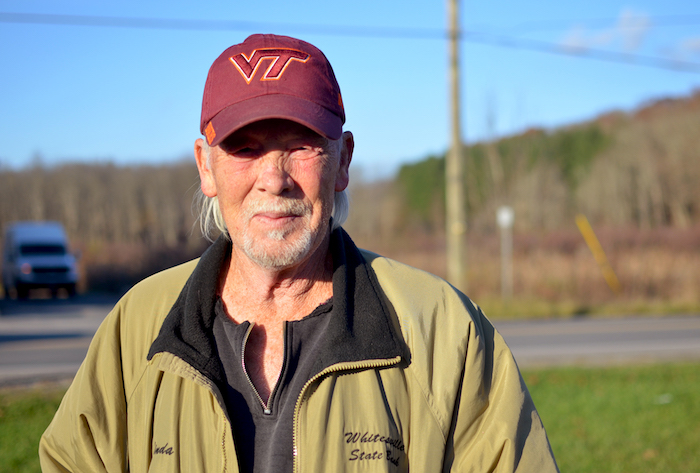 Nelson, a retired union member, said his time in the mines left him with one kidney and a myriad of health problems. He now worries for his grandchildren’s future as well as for his colleagues still fighting for a living in the mines.

“There’s no security there whatsoever. It’s tough trying to make a living in the mines these days,” Nelson said.

One of Justice’s idled operations – A&G’s mine on Looney Ridge – has stripped 590 acres of forest in Wise County, Virginia. The mine entered temporary cessation in April 2013, and the state set a deadline to reclaim the mine by January 2014.

A CHN site visit to the mine in November 2017 confirmed that, four years after the original deadline, the mine was far from reclaimed, one instance in a pattern of violations the state government registered at the site. What was once a rolling, tree-covered landscape was barren. Several trucks sat inactive on the large mine, the site was neither backfilled nor revegetated and a highwall cut to reach the coal remained untouched.

Employment logs show the mine – which employed 160 people in 2005 – accounted for 36 jobs the year it applied for temporary cessation and only three the following year. 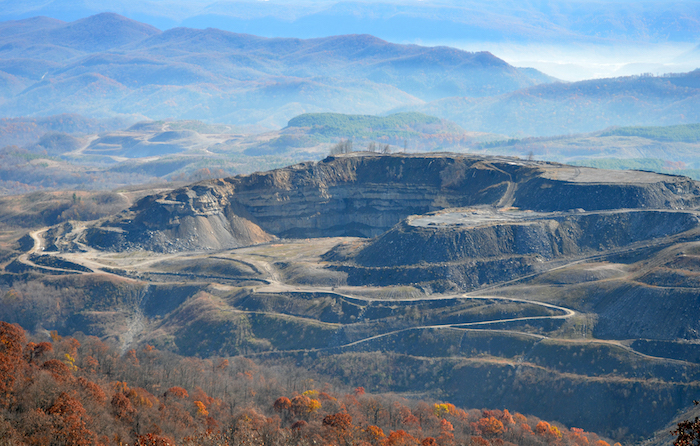 A&G Coal Corp’s idled strip mine scars Looney Ridge in Virginia on the Kentucky border. Reclamation is more than four years behind schedule.

As a water scientist and community organizer with the NGO Appalachian Voices, Matt Hepler keeps a close eye on Justice’s companies. He has seen almost no reclamation on Looney Ridge, which he calls “a visual blight on the land”.

“The great concern is people feel that Wise County and other counties are going to be left holding the bag for this clean-up,” Hepler said.

Justice is not the only operator warehousing mines in extended inactivity. CHN identified 59 cases in Central Appalachia in which a currently idle permit has been inactive for more than five straight years with neither reclamation nor production required by law, including several that have been halted since the 1980s. 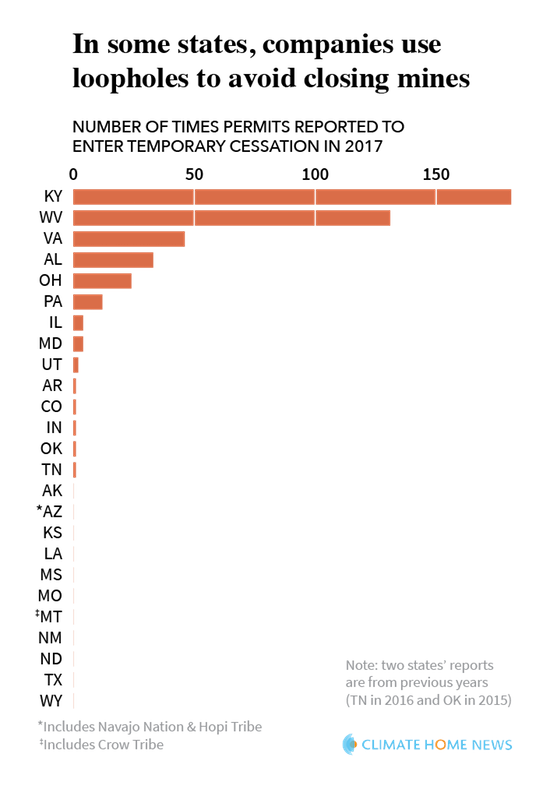 Central Appalachia is especially hard-hit. Open records requests revealed 25 permits in Virginia sitting in temporary cessation, and 270 permits in West Virginia mothballed in that state’s version of the same. Permits cover areas of land and can be whole mines or parts of mines. In Kentucky, 186 permits are in some form of temporary cessation.

Companies usually cite depressed coal prices as the reason for pausing production, but with the coal industry not expected to return to its historical highs, experts and activists argue that these idled mines need to be reclaimed and closed.

“Temporary cessation was designed to help coal companies during short-term fluctuations in the coal market,” Hepler said. “Companies are attempting to wait for the coal market to improve, even though all signs indicate that isn’t going to happen. The biggest problem with this situation is that it delays mine reclamation and increases the chance the companies may go bankrupt and dump reclamation liabilities on states and taxpayers.”

Michael Hendryx, a professor at Indiana University, has extensively researched the health effects of Central Appalachian surface mining. “People who live around these mining sites have higher levels of a number of different types of illnesses including types of cancer, vascular disease and lung disease,” Hendryx said. His research uncovered a potential link between the region’s surface mines and birth defects.

The lack of activity at idled mines means less dust is kicked up in the short-term, Hendryx said, but long-term health and environmental consequences are not addressed until the land is fully reclaimed. Revegetation tamps down harmful dust and aggressive water treatment can slow or eliminate downstream pollution.

For Nelson, the reality for workers is clear: “The bottom line is, when they get done mining here, the coal companies are going to pack up and leave. We’re not their concern here.”