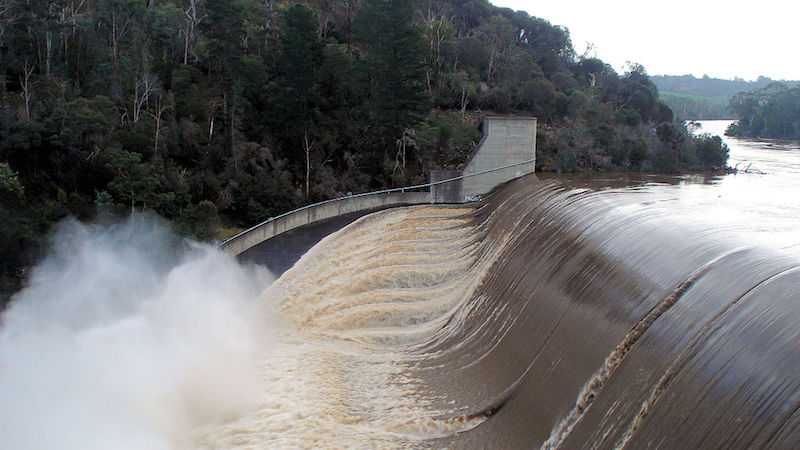 Most of Tasmania's electricity comes from hydroelectric dams (Photo: Aaroncrick)

By Sophie Vorrath for RenewEconomy

The Tasmanian Labor party has pledged to take the state to “120% renewables”, with an energy strategy that aims to lock in lower electricity prices and secure the island’s status as a clean power exporter.

In a statement released on Friday, ahead of the March 3 state election, Labor leader Rebecca White said her party would – if elected – “restore” and capitalise on the Australian state’s renewable electricity advantage, with a range of new policy measures and targets.

Chief among these are a target of “more than 120% renewables” within five years, and a “Distributed Energy Target” to boost on-site installations like rooftop solar by more than 80% by 2022.

Of course, for Tasmania, a 120% target is not as impressive as it sounds – the state regularly generates 100% renewable electricity from its ample hydropower resources, and also exports to Victoria.

But White said the 120% target was designed to make Tasmania the renewable energy “powerhouse” of Australia, allowing it to sell its excess hydro, wind and solar energy interstate – and in this way boosting the case for a second Bass Strait interconnector to Victoria.

The 80% boost to distributed renewables is perhaps a more significant number, particularly in light of the state’s recent energy crisis, in which drought and a broken interconnector exposed its heavy dependence on hydro, and lack of back-up resources or plans.

In the end, the crisis left the state-owned utility little choice but to resort to diesel generator sets to make up the generation supply shortfall – a dirty and expensive venture that cost a total of $64 million.

Labor’s White said the current state Liberal government – which presided over this crisis – had failed to seize energy opportunities and, in doing so, had put energy security at risk.

Adani: Another blow for giant Australian coal mine

“Not one major renewable energy project has been completed in the past four years,” White said on Friday. “Private investors have been left frustrated by a lack of urgency from the Hodgman government.

Labor’s policy plan also promises to reinvest $25 million in dividends from TasNetworks to fund a range of initiatives to take advantage of technological advances in renewable energy generation and storage – presumably including battery storage and internet of things solutions to load shifting and peak shaving.

Another key initiative targets the state’s agriculture sector, with a scheme designed to help farmers generate and use their own power.

“Farms are producing their own electricity through solar and wind installations, but as it stands their generation can only be used to offset costs behind one meter,” White said on Friday.

“A majority Labor government will work with TasNetworks to change the policy so that energy generated at one site can be used across all meters on the same property, provided it is used in real time.

“It is estimated the policy change could unlock more than $20m in direct on-farm investment.”

The Labor policy also pledges to install solar and battery storage at every new public housing property built – up to 1000 installations over six years; and to create a virtual power plant of connected homes, businesses and government buildings that would contribute to the state’s energy security.

This last pledge bodes well for the solar and battery storage microgrid pilot project proposed for two towns in the state’s south east, which the Liberal government has promised to help fund if it is re-elected.

The Liberal party has also pledged it will withdraw Tasmania from the National Electricity Market, cutting all ties with mainland pricing mechanisms even though it will still export and import power over its sub-sea cable.

Labor, meanwhile, promises to commit $7.5m to a staged roll-out of electric and alternative fuel vehicles in the state, if it is elected.

Increased uptake of EVs in the state would also be a great way to use up that extra 20% of renewable energy generation, other than exporting it to the mainland.

This article was originally published on RenewEconomy.