Background warming and natural cycles could push warming beyond 1.5C, within a decade of nations agreeing to try and keep it below that limit 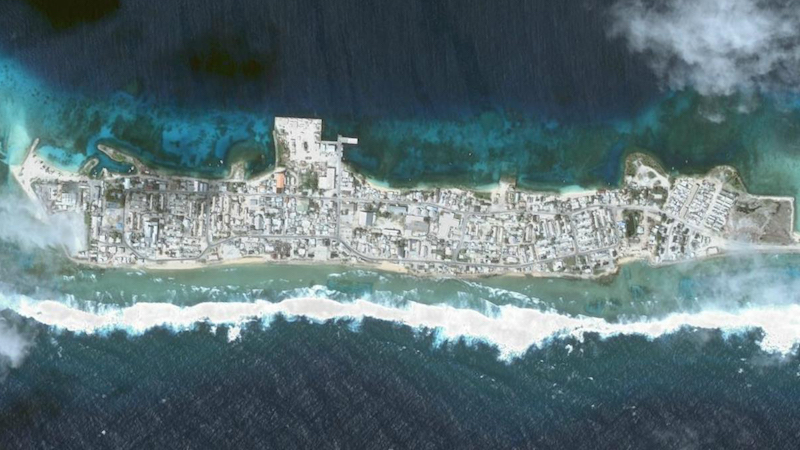 Ebeye atoll in the Marshall Islands, one of the nations that insist they cannot survive warming in excess of 1.5C (Photo: NASA)

The UK’s meteorological agency has forecast the global temperature might flicker above 1.5C within the next five years.

That would be within a decade of the Paris climate deal setting 1.5C as an aspirational limit on global warming.

The Met Office’s decadal forecast said the global average temperature was “likely” to exceed 1C above pre-industrial levels between 2018-2022 and could reach 1.5C.

“There is also a small (around 10%) chance that at least one year in the period could exceed 1.5C above pre-industrial levels,” the office said in a statement on Wednesday. “It is the first time that such high values have been highlighted within these forecasts.”

Met Office scientists were quick to point out that this would not actually breach the Paris Agreement, as that limit refers to a long term average, rather than a yearly reading.

The office’s chief scientist, professor Stephen Belcher, said: “Given we’ve seen global average temperatures around 1C above pre-industrial levels over the last three years, it is now possible that continued warming from greenhouse gases along with natural variability could combine so we temporarily exceed 1.5C in the next five years.”

The Paris climate deal, agreed by 197 UN member states in 2015, set a global goal for keeping temperatures “well below 2C”, aiming for 1.5C.

The lower goal is considered by many of the most vulnerable countries, especially low-lying island nations, to be the upper limit for their homelands to survive. Coral scientists also predict that more than 1.5C of warming would wipe out most coral reefs.

“We should remember that the Paris Agreement is about the global climate reaching this level over a longer-term average, rather than just a temporary excursion,” said Dr Doug Smith from the Met Office Hadley Centre.

A draft report being prepared by the UN’s climate science body on 1.5C found that the global long term average was on track to exceed the lower Paris limit by mid-century.

Against a long term warming trend, weather phenomena throw in some natural variability. El Niño contributed to record warm temperatures in 2015 and 2016.

Prof Adam Scaife, head of long range prediction at the Met Office, commented: “The global pattern of heat would be different to a more sustained exceeding of the Paris 1.5C threshold.  Early, temporary excursions above this level of warming are likely to coincide with a large El Niño event in the Pacific.”