In a statement, the council president expanded concerns over the links between climate and violence in Africa to two regions that cover 26 countries 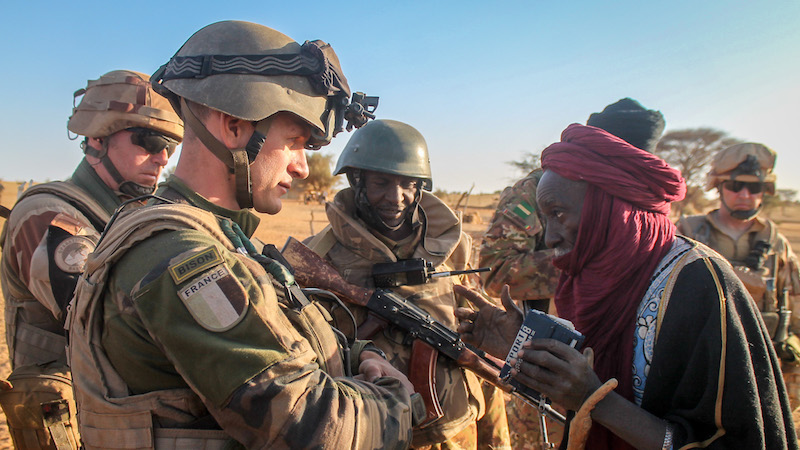 French soldiers talk to locals in southern Mali. Since 2014, the French have led Operation Barkhane, a military effort to fight terror in the Sahel (Photo: TM1972/Wikipedia)

The UN Security Council has identified climate change as a driver of conflict across West Africa and the Sahel, in a statement published on Tuesday.

It expands on a 2017 resolution linking the dramatic shrinking of Lake Chad to the rise of Boko Haram and other armed groups in the region.

Water scarcity and desertification pit farming, pastoralist and fishing communities against each other for dwindling resources, analysts warn. As traditional livelihoods become harder to sustain, some people are seeking violent solutions.

The statement noted “the adverse effects of climate change and ecological changes among other factors on the stability of West Africa and the Sahel”, two regions that together span 26 countries. The security council, the UN’s most powerful body, “emphasises the need for adequate risk assessments and risk management strategies”.

Janani Vivekananda, climate change and security expert at consultancy Adelphi, described it as “a significant and positive step”.

She told Climate Home News: “Now, Lake Chad can’t be seen as the standalone example of climate security recognized by the UNSC. This points to an emerging coherence in how the UNSC recognizes the root causes of threats to peace and security.”

That needs to feed into humanitarian and peacebuilding action on the ground, she added. “There could be much stronger efforts to ensure all funds and programmes implemented are both conflict-sensitive and climate-sensitive”

Creeping desertification and worsening droughts are placing strain on natural resources and communities that depend on them across the Sahel. As well as Boko Haram, the security council statement condemned attacks by Jama’at Nasr al-Islam wal Muslimin (JNIM), which operates in the area.

A meeting of climate security experts in the Hague, December 2017, identified the Lake Chad basin and Sahelian country Mali as two priority areas for action.

Lake Chad remains one of the starkest examples of how climate change impacts can create fertile conditions for terrorism and organised crime. The lake’s area has reduced by 90% in four decades, due to reduced rainfall and growth in water demand as the basin’s population boomed to 17 million.

Hindou Oumarou Ibrahim, a community advocate from Chad, told the World Economic Forum last week that the rainy season used to last six months and is now only two or three.

“Everybody knows that [a lack of] rain is impacting crops and crops is food security,” she said. “The consequence is conflict between communities… Boko Haram is the famous one. How about the local and regional conflict between farmers, fishermen and pastoralists for resources? People are dying.”

The Sahel is a region defined by its low rainfall, running through parts of 14 different countries across the southern edge of the Sahara desert (Map: T L Miles)

Water supplies are becoming more erratic, agreed Mohammed Bila, who monitors water levels for the Lake Chad Basin Commission. Two or three years of normal rainfall are typically followed by a year or two of drought.

“What we have seen is that any time there is a reduction of the size of the lake, the number of conflicts increases between the different user groups,” he told Climate Home News.

“The most recent conflicts, the Boko Haram, could be attributed to a long period of deprivation. Over 25 years, the livelihood groups don’t have stability… all the children born within this period, they grow up with deprivation, they haven’t seen anything good. These are the ones who are easily misdirected to these violent conflicts.”

Solutions range from community-level adaptations to heavy engineering. In the first category are efforts to use water more efficiently and create jobs that are less reliant on water. In the second, an ambitious proposal to divert water from the Ubangi River along a 2,400km canal into Lake Chad, raising the water level an estimated one metre.